So, when exactly did Peking become Beijing? And why?

Over here in Greece the Olympics are being broadcast by state channel ΕΡΤ. It took me a few days to realise that the phrase ΠΕΚΙΝΟ 2008 that swooshed across their coverage was effectively the Greek for Peking, rather than using a transliteration of Beijing.

That prompted me to wonder when Peking had actually become Beijing. I mean, when I grew up the capital city of China was most definitely Peking. Then again, when I grew up there was a country called Czechoslovakia. Actually, it seems there still is, if you listen to John McCain.

Anyway, a bit of research turns up that it was after 1979 that Peking became Beijing, when the Pinyin method of conveying Mandarin in the Roman alphabet was adopted as an international standard. Digging around on the Internet seems to indicate that Beijing is only the latest in a long line of incarnations of the city's name as understood by Westerners. And let's not even start on the fact that between 1928 and 1949, it was known as Peiping (or Beiping in the new system), because it wasn't the 'official' capital of 'official' China anymore!

The Pinyin method was developed by a People's Republic of China government committee in the 50s, and it came to replace a system known as Chinese Postal Map Romanization. This itself was adapted from another earlier system - the Wade-Giles system.

That had been invented in the 18th century by Thomas Francis Wade. He sounds like one of those all-round British Empire good eggs you used to read about in Boy's Own Adventure books. He lived for a while on the Ionian islands, fought in the Opium Wars in China, and still found time to learn Mandarin and then wonder 'how the deuces a chap was supposed to write down all those dashed funny symbols in proper letters?'.

Those weren't his exact words, you understand. In fact, he was British ambassador to China for a while, and a Professor of Chinese at Cambridge, so I imagine he never swore at all in any case.

Looking at the rules for rendering Chinese into English has made me realise that my regular struggle to recognise some of the lesser-used Greek characters like ζ, φ and ψ is absolute child's play by comparison.

I've been doing a lot of research around European newspaper websites at the moment, in preparation for my presentation in Amsterdam at the Euro IA Summit, and I couldn't help noticing that, actually, the Chinese Postal Map 'Peking' way of spelling Beijing seems to have persisted in most major European languages outside of English. 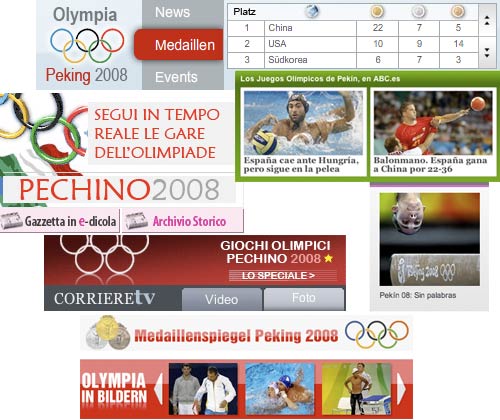 Read other recent posts about: Olympics

Even from a young age i remember learning that the capital of China was ΠΕΚΙΝΟ. I only heard of Beijing when I moved to North America. If I had heard the word beijing I would probably think it is something that is served with a side of rice.