I've been writing a series of posts looking at the history of protest, politics and dissent at the Olympic Games since their modern inception in 1896. From 1968 to 1984 the Games saw some of their most turbulent times. 1968 was marred by protests on the podiums and a massacre away from the stadium, 1972 was scarred by the appalling terrorist murders of 11 members of the Israeli Olympic delegation, and 1976 saw the first mass political boycott.

The Soviet Union had only belatedly joined the international Olympic movement, first taking part in 1952, but in 1974 Moscow beat Los Angeles 39 votes to 20 to earn the honour of hosting the 1980 Summer Games, becoming the first communist country to do so. That honour was to be impacted by a US-led boycott of the Games, which left 62 members of the Olympic movement absent from the Russian capital.

The almost total identification of Ronald Reagan with anti-communism and eighties American politics makes it easy to assume that he ordered the boycott, but of course, the 1980 U.S. Presidential elections took place after the Games were held, and it was Democrat Jimmy Carter who gave impetus to the U.S. led boycott. 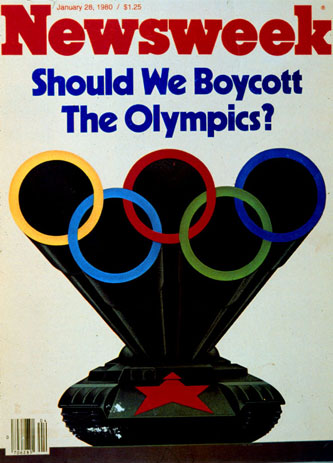 In February of 1980 US Secretary of State Cyrus Vance told the IOC that:

"We will oppose the participation of an American team in any Olympic Games in the capital of an invading nation. This position is firm. It reflects the deep convictions of the United States Congress and the American people."

Whilst the row rumbled on, and preparations for the boycott went ahead, that same month the USA staged the 1980 Winter Olympics in Lake Placid, New York, which the Soviet Union attended.

An article in the Miami Herald, which seems to have been absorbed by a 'java.lang.NullPointerException' error since I first downloaded it, told of the heartbreak of those U.S. athletes who were unable to go. Olympic Track & Field trials were held as usual, just in case the boycott got lifted at the last moment. Vice-President Walter Mondale has described those who missed out on the Games as:

"Warriors in our country's defense of freedom. I believe that our young athletes, who sacrificed so much, deserve great credit for their part in denying respectability to such an odious regime."

Some of them never got another chance. Those that did compete in 1984 also had their participation devalued by the fact that the 1984 Games were also subject to a Cold War boycott.

Regardless of the boycott, the Games went ahead, and the Moscow organisers made sure there were plenty of poster designs in order to let people know. 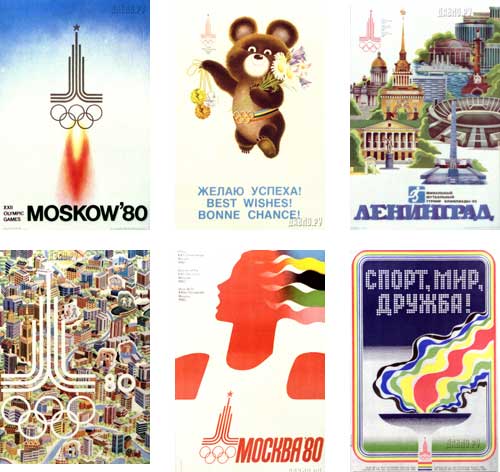 Britain did go to the Moscow Olympics, in a move which still looks a surprise, given the general way that British foreign policy and national interest tends to dovetail with that of America at the highest level. In fact the British Government were implacably opposed to British sportsmen and women going to Moscow, but the BOA held firm, with chairman Sir Denis Follows insisting that:

"We believe sport should be a bridge, and not a destroyer"

I would suggest that timing was a crucial element here. In 1980 when Margaret Thatcher and Michael Heseltine were writing letters to the BOA and making speeches in Parliament about sporting sanctions, the new Conservative Government had not been in power long. It is much harder to imagine the BOA standing firm against political interference in the running of their sport 4 years later, when Margaret Thatcher was in her post-Falklands pomp. As it turned out, in 1984, the British government was mostly occupied with fast-tracking Zola Budd's passport to ensure she could compete in Los Angeles.

At the opening ceremony the British team marched behind an Olympic flag rather than a British flag, although at this distance I can't work out whether that was because the BOA was annoyed about the Soviets in Afghanistan, or making the point that they had no support from the British Government.

Thanks to the Great Britain team going, we witnessed some epic Olympic battles that lived long in my memory. Daley Thompson, Allan Wells, Duncan Goodhew, Steve Ovett and Sebastion Coe all left their mark on the Games from a British perspective.

There seems to be a good documentary about the boycott available from YouTube called "The Cold War Olympics". Because it doesn't have an on-screen DOG, I'm not sure who made it or when, but it seems to have most of the main British people involved.

It comes in four parts - you can watch the first part above, and also see part two, three and four.

Daley Thompson's involvement also spawned something much closer to the usual subject matter of this blog - a series of 80's computer games from Ocean. 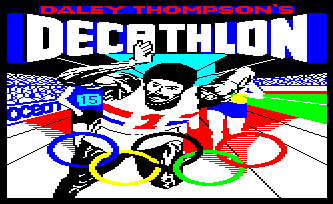 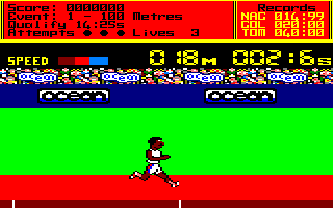 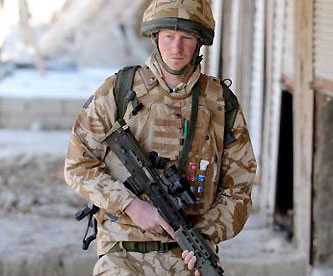 It is deeply depressingly ironic that as the Olympic Games return to a communist country, there have again been calls from the West for a boycott, based on China's record of supporting Sudanese actions in Darfur, or aimed at changing Chinese policy toward Tibet or Taiwan.

Meanwhile, American and British troops are deployed on the ground in Afghanistan, fighting a war to support a beleaguered government against rebels and Islamic fanatics, for reasons of wider national security.

What is it they say about those that refuse to learn from history....?

Having lost out in 1974 in the vote to host the 1980 Olympics, Los Angeles was successful in its attempt to host in 1984. The repercussions of 1980 were felt though, as another Cold War boycott meant that the Soviets and those within their sphere of influence refused to attend.

The Cold War Olympics documentary has been showing recently on the BBC red button Sport Multiscreen, as part of the run-up to the Olympics - presumably a repeat from down the line.

"The Cold War Olympics" originally went out on BBC4 in October 2005. It went out on the same night as "A Very British Olympics", a "weren't we quaint then" review of preparations for the 1948 games.