Before and during the course of the 2008 Olympic Games in Beijing I've been writing a series of posts looking at the complicated history of politics, protest and dissent that have surrounded the modern Games since they were first held in Athens in 1896.

On that occasion they were marked by an overt display of national pride by the hosts, and a protest run by Stamata Revithi who wanted women to be allowed to partake in the event. Athens also hosted a 1906 Intercalated Games, and, before the first modern Olympiad was held, a series of games funded by Evangelis Zappas during the mid-1800s.

During the difficult boycott years of 1980 and 1984 it was suggested on more than one occasion that the Games could become permanently organised in Athens - but it was to be 2004 when the spiritual home of the Games next got to hold the Olympics.

Getting the Games ready on time

Athens beat Rome, Cape Town, Stockholm and Buenos Aires in the bidding process, but the difficulties leading up to the Games was not winning the bid, but getting the infrastructure ready in time. The Athens Olympic Stadium, Ολυμπιακό Στάδιο, for example, was only officially re-opened just 14 days before the Games were due to begin due to complexities in the refurbishment. 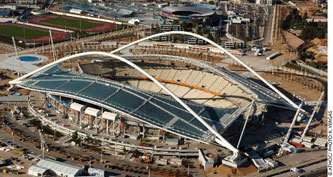 14 as a number had a more morbid association too. It was the official death toll of construction workers in getting the Games ready - up from one death in Sydney and two in Barcelona. Other sources put the number of deaths higher, at 40.

The biggest intrigue of the Games was the behaviour of Sydney medal-winning Greek sprinters Kostas Kederis and Katerina Thanou. Having failed to attend a mandatory drugs test, they claimed that they were 'involved' in a motorcycle accident. They withdrew from the Games in order to avoid a forced expulsion.

However, by November 2004, it became clear that they had faked the whole motorcycle incident, and they were charged with perjury and other offences by the Greek authorities.

Thanou is no stranger to legal action, and threatened to sue the IOC in order to ensure that her 2000 Sydney silver medal was upgraded to gold once Marian Jones had been stripped of her medal.

Both athletes served a two year suspension for missing three drugs tests - however the Greek legal system moves slowly, and the perjury case over their 'accident' remains unresolved.

Thanou was selected for the Greek team for the 2008 Olympics in Beijing, but the IOC's disciplinary panel recommended that her accreditation be refused due to the fact that her actions in 2004 have bought disrepute to the Olympic Movement, and she was not allowed to compete. 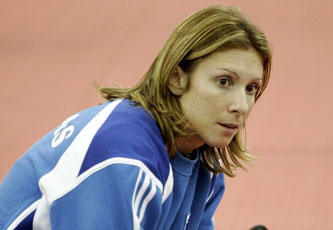 Much of the politics surrounding the Athens Games have emerged after the competition had finished and the attention of the world's media had moved on. One such example is the Vodafone phone-tapping scandal.

It transpires that before and during the Games, the Vodafone mobile network in Greece had been compromised by some illegally installed software. This allowed the perpetrators to eavesdrop on the security preparations for the Games, and also on leading figures in the Greek Government and political establishment.

Despite a lengthy investigation, Greek authorities have not been able to identify the culprits, and in January of this year they called off the search.

Satirists in the Greek press have had no such problem in easily identifying the one superpower with the resources to pull off such an audacious piece of nationwide espionage, and, in a post 9/11 environment, the national security interest to make it an acceptable policy.

A second Olympics-related scandal has emerged in Greek politics in recent months. Investigators in Germany discovered that the firm had been regularly diverting 'black money' into the coffers of Greece's political parties and, allegedly, directly into the pockets of politicians themselves. Both leading parties in Greece, ΝΔ and ΠΑΣΟΚ, are implicated.

The bribery that has come to light covers the period leading up to the Olympics, when Siemens won significant contracts in providing Olympic infrastructure equipment.

Following the widespread protests that accompanied the Torch Relay earlier in 2008, the Chinese authorities must have hoped that the Beijing Games would pass peacefully. However, with the media's glare on a country with a poor human rights record, it seemed inevitable that Olympic dissent would again rear its head in the 2008 Olympics.

It was sad to see that Greece scored almost no medals this time around.

Yes, in the fifties, sixties and even up to the seventies it was usual to see a Greek team come back with just one or two medals, and sometimes none at all. Sydney and Athens, with 13 and 16 medals respectively, have certainly upped expectations from the Greek public.