'Ambush marketing' at major sporting events has become a prevalent phenomena in the 2000s, affecting the Olympics despite the incredibly complex sponsorship rules drawn up by the IOC. The 2002 Winter Olympics saw Sprint running a snowy campaign that associated the brand with sponsoring 'everything fast, new, and really quite amazing', whilst during the 2004 Athens games, beer Miller ran a campaign proclaiming victory in an Athens-based taste test. Athens, Georgia, mind you, but Athens nevertheless. And who can forget when FIFA stripped Dutch fans of their non-official sponsor beer promoting trousers at the 2006 World Cup? 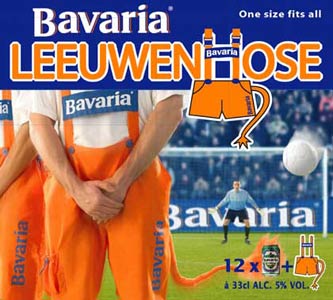 It looks like the 2008 Olympics are also seeing a surge in 'spambush marketing' - spam messages designed specifically to exploit interest in the games. In the last month or so a particularly sick and twisted example has surfaced - informing people that the games may be cancelled due to another major earthquake disaster in China. Users are getting messages with straplines like 'Olympic games under threat of failure!', and are directed to a website after being informed that a new quake has 'levelled Beijing'. Security experts Sophos reported the development at the beginning of June.

"The message on the site claims that a 9.0 Richter scale earthquake has hit Beijing and caused millions in casualties. To see additional details, a user may open or run the video. With the recent China Earthquake in Szchuen still fresh in people’s memory, many would open the file without a second thought. Unfortunately, instead of an online video as it appears to be, opening the link will actually execute the .exe file beijing.exe. Needless to say, the file contains malware and delivers a malicious payload."

As well as the false earthquake story, there are also reports of spam messages that claim to be from the organisers of the games.

Still, at least it has only been happening for a couple of months before the games.

With Africa being the spiritual home of the 419 scam, it is no great surprise to report that I received my first spam email suggesting I invest in some completely fictitious 2010 World Cup Franchises as far back as April last year. 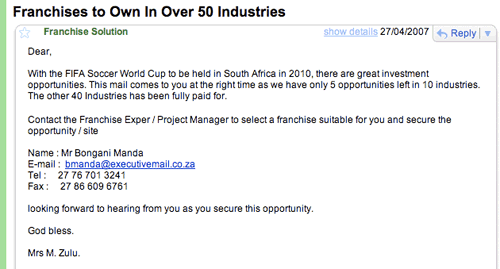 Just imagine that the FIFA world cup may not happen in South Africa based on the current stadium renovation plan that has been delayed... Something good to reply to spammers ;)

Yes Olivier, not just the stadium plans, but the electricity situation in South Africa is a worry as well for the World Cup.