Euro 2008: The websites - Romania & the Netherlands

The 'group of death' gets underway at Euro 2008 today, pitting World Champions Italy, against World Cup Runners-Up France. Based on their qualifying record, however, neither of them earned a top seed spot, which belongs to the Netherlands. The Dutch open their campaign against Italy in Bern, whilst in the earlier game France take on the other team in the group, Romania, in Zürich.

The Federaţia Română de Fotbal have got one of the biggest websites I have ever looked at - and not in a good way. If their CMS has some kind of option for how many recent news stories should be displayed on the homepage, they clearly have it set to something like 'the last 7 years'. The homepage is mammoth.

The BBC recently got a lot of criticism for fixing the width of the BBC News site to 1024 pixels. They've got nothing on the Romanian FA site, which comes in with a fixed width of 1256 pixels. And it is long. Very, very long. 45,163 pixels worth of long. On my MacBook I get a visible web page height of 545 pixels, which means the homepage takes up 82 scrolling pages worth of space. Taking a PNG screenshot of the whole page took 12.1Mb. Reducing the screenshot to a sensible 500px high for putting on the blog leaves it just 14 pixels wide.

If you can actually get to grips with the size of the pages, the site isn't all bad, but there is limited original content about Euro 2008. The logs for the tournament, and for the 2010 FIFA World Cup both link through to the official sites for those tournaments, rather than to specific Romanian coverage. Likewise the embedded fixture list for the national team links through to UEFA.

Whilst there is a lot of news on the homepage, it feels as if nothing has happened for months, as the scrolling ticker is still indicating as 'breaking news' the results of the draws for Euro 2008 and 2010 World Cup qualifying, which happened back in December.

Whilst clicking around on www.frf.ro I ended up on www.info.frf.ro, which had a different layout and set of navigation. This site seemed more modern looking and up-to-date. It included, for example, a multimedia area, but still the Euro 2008 logo clicked through to UEFA. 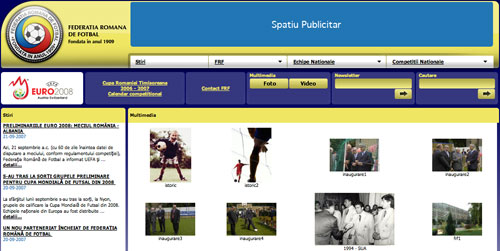 Romania are going to have to put up a better performance on the pitch than they've managed on the web if they are going to escape from Group C.

By contrast to Romania, the Dutch FA - the Koninklijke Nederlandse Voetbalbond - have what looks like a sparkling website, with a plenty of interactive features. The website comes in Dutch and English flavours. 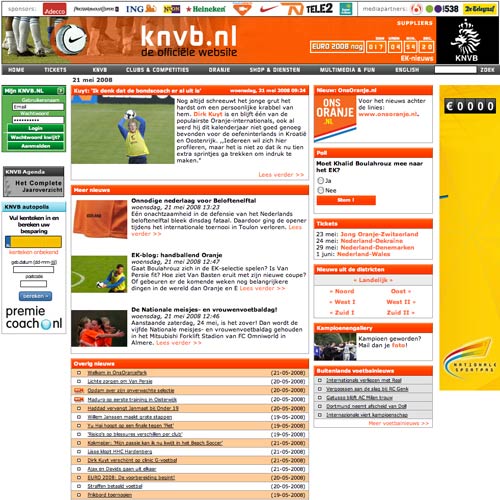 Users can vote on the homepage on a pressing topic for the Oranjes, and the site also has extras for registered users. There isn't a specific section for Euro 2008, but the site has an embedded countdown clock in the banner area.

Of the six sites I've looked at so far, the Netherlands' site is the first one to really take multimedia to the current limit, with an online television station - KNVB TV.

KNVB TV features a selection of clips, including coverage of the Jong Oranje Under-21 team, and goals and highlights from the senior team's qualification route to Austria and Switzerland. 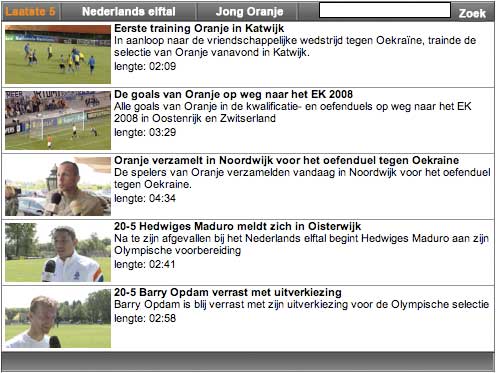 One point of interest though - the video stream are geo-protected, so that they cannot be accessed from outside the Netherlands. Whilst that makes sense from a rights point of view, it does mean of course that the travelling army of Dutch fans currently encamped in Bern cannot view it - and presumably they are the main target audience. 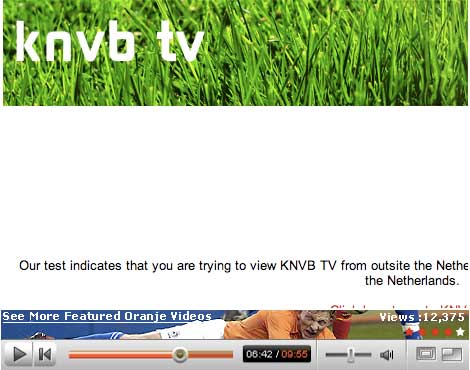 Group D gets underway tomorrow, but I'll be returning to cover Euro 2008 on Wednesday with a review of two teams from Group A playing their second matches in the tournament - Portugal and Turkey.

Looks like the problem with that crazily long Romanian page has been fixed. Pretty funny though.

Ack! That is the trouble with doing your research up front, and then not re-checking it all the morning you publish. Still, if you are looking for a page that is still very, very, long, you won't go far wrong with the Russian FA site map.

Hopefully these things will get sorted.
Funny what you wrote:
Romania are going to have to put up a better performance on the pitch than they've managed on the web if they are going to escape from Group C.

france unable to get pass romania and italy routed by dens. yups certainly the group of death