Euro 2008 kicked off yesterday with an opening match between Switzerland and the Czech Republic in Basel, and another game between Portugal vs Turkey in Geneva.

Obviously I watched the games, but I've also had an eye on the websites of the football associations in the competing nations. Today's programme of games sees co-hosts Austria start their campaign in Vienna with a game against the team that ultimately knocked England out of Euro 2008 contention - Croatia.

We saw yesterday that the Swiss FA have done very little on their website to promote the existence of the tournament in their country. The same could not be said of the Österreichischer Fußball-Bund, the Austrian FA, who have produced a great deal of Euro 2008 web coverage. When first visiting, the user is presented with a choice between visiting the regular OFB site, or the special OFB Euro 2008 site.

The site contains all you would expect about the tournament, and a bit more. There are city guides to the host locations, including extensive coverage of the four cities in Switzerland. The Austrian FA also seem to be covering all international football news building up to the tournament, with stories, for example, of the inevitable bust-up in the Netherlands squad before they have even arrived at the championship. 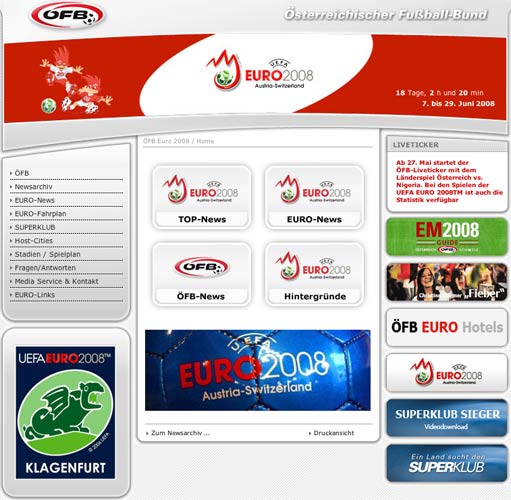 The site also includes a section about the Austrian national team, who will be making their first ever appearance in a European Championship Finals, and a section with multimedia and video content. There is also some content in the English language.

Like the Swiss and Czech sites I looked at yesterday, there seems to be no interactivity in the form of votes or message boards that I could find. Again, there is also an absence of RSS.

What struck me as most interesting about this site was the contrast with the Swiss FA. They have produced virtually no coverage themselves of the tournament, whereas the Austrian FA seem to have gone out of their way to make a lot of content, much of which is duplication of what is available on UEFA's official site for the tournament. I can't help thinking that there is a happier and less expensive medium somewhere between the two.

It will be sometime before English football can forgive the Croatians for not turning up at Wembley last November and playing out the dull 0-0 draw that would have seen both teams qualify for the finals. However, in fairness to the Croats, it seemed the English team and English press under-estimated them throughout the entire qualifying campaign. They will be clear favourites to win tonight's clash with Austria though, but given the investment that has gone into the OFB site, I doubted that the Croatian FA would be able to match them on the web. However, the Hrvatski nogometni savez have also invested in their web presence. 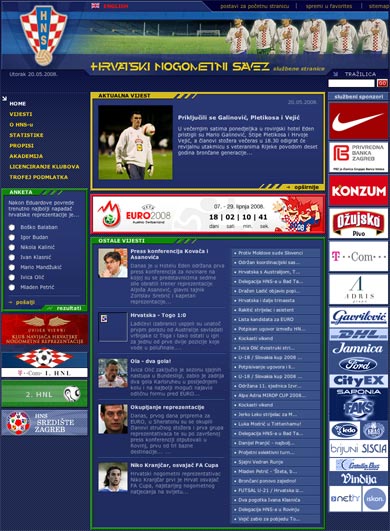 The site comes in Croatian, with a limited 'under construction' English section that concentrates on the troubled history of the Croatian FA. They were formed in 1912, but with the turbulent century that awaited the Balkans region, it was only with independence in the 1990s that the Croatian FA could finally control football in the region as the sole governing body. They were also briefly affiliated to FIFA in 1941, when you would have thought people would have been too busy to worry about that kind of paperwork.

The site is the first I've looked at so far to carry some interactive elements on the homepage, with the inclusion of an online vote. 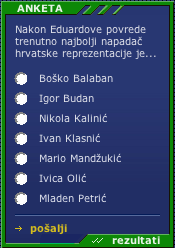 In some places the site looks more like a B2B site for the benefit of the media rather than for the benefit of fans, as there are an awful lot of official looking PDF documents to download. The news section does carry news of ex-pat Croatians - with a feature on Niko Kranjčar appearing in the F.A. Cup Final, for example. There doesn't appear to be any video or audio content, and like all the sites I've seen so far there is no RSS feed.

Group C, widely described as the 'group of death' in this tournament, gets underway tomorrow. I'll be looking at the football association websites belonging to top seeds the Netherlands, and perennial tournament dark horses Romania.