The Daily Express was leading yesterday with another story about the "extent of the damage unlimited immigration is causing to the fabric of society". 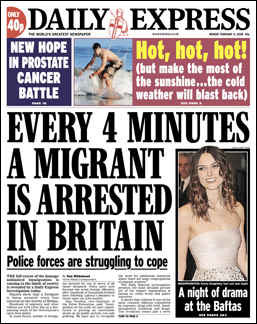 Statistics are fun, of course. The Express claim that "A Migrant arrested every 4 minutes in UK" is based on an extrapolated figure of 360 foreigners being arrested a day, which makes up 7% of the total.

If I remember my O-Level maths correctly, that suggests that the total number of arrests per day is 5,142, meaning 4,783 of those arrests of British citizens. Or to put it another way, one otherwise law-abiding British person is arrested every 18 seconds in Briton.

Let's put those figures into an 'infogram' to make it a bit easier to digest the numbers. 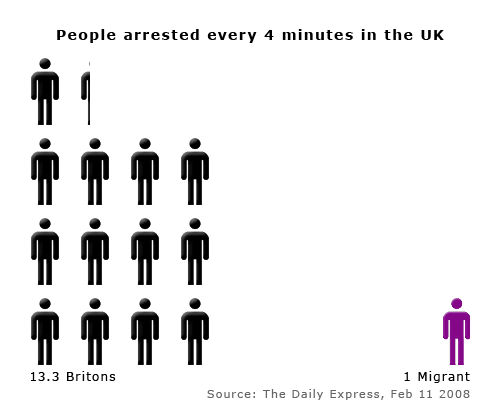 One migrant is arrested every 4 minutes in the UK, and one Briton is arrested every 18 seconds. For every migrant arrested, 13.3 British people are arrested. Now, remind me, which group is it 'putting an intolerable strain' on the system?

The Express study shows that 'violence is one of the most common offences committed by migrants, along with theft, fraud, immigration violations and drugs', although you would think given their editorial line that they would be pleased that people were being arrested for immigration violations, wouldn't you?

Interestingly, although the front page of the printed edition hit the streets of Greece first thing yesterday morning, it wasn't until the afternoon that the story actually appeared on the Express website.

When it did finally appear, there was quite an amusing juxtaposition in the search results... 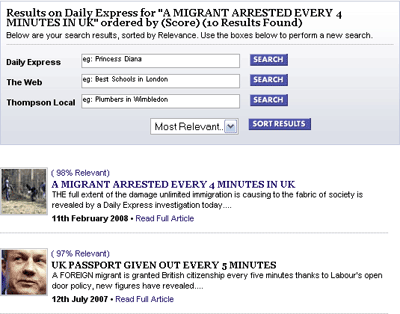 Adding to this is the fact that migrants and their first-generation children make up around 8.4pc of the UK population (2001 census [PDF]).

So by only accounting for 7pc of the arrestee population, it shows that they are actually better behaved than the general British population.

But, as we know, facts too often get in the way of a good story.

Well that's one way of looking at it gooner. Another is that immigrants are being disproportionately targeted for arrest. Just because you are arrested doesn't mean you did anything wrong.

I see today's Express figure of choice is OVER 860 MIGRANTS FLOOD IN EVERY DAY. I wonder if you have to subtract the 360 banged up to get the true net figure. But don't worry, it isn't all bad - house prices were up again yesterday...