There was an interesting piece on the new-look online Guardian yesterday about how the better than expected take-up of the streaming version of the iPlayer was putting undue strain on Britain's broadband infrastructure - "What is the true market impact of the BBCi iPlayer?" 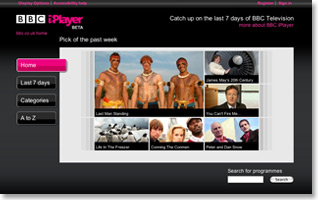 Steve Hewlett points out some flaws with the original market impact assesment as part of the regulatory process for approving the iPlayer - the Public Value Test - because it did not rigorously enough examine the issue of increased bandwidth usage in the UK, and who pays for any necessary upgrade of the interweb tubes.

At the time I had some misgivings with the market impact assessment - notably because it paid no attention to whether increased use of on demand television services would eat into the time people spent playing games, as if games were not part of the UK's entertainment industry.

There are a couple of points in Hewlett's article which don't, though, for me, quite add up. First is the question of increased bandwidth usage:

"But there is another even more pressing issue that the BBC Trust appears to have considered and then passed over - the question of the huge increase in demand for UK bandwidth caused by people using the BBC iPlayer, and who pays for it".

Whilst there can be no doubt that delivering '3.5m programmes in just two weeks', mostly via streaming, puts new demands into the marketplace, worldwide the last few years have seen a massive rise in p2p Internet traffic. Not all of that can be the clumsy iPlayer download application.

p2p usage graph from TorrentFreak - "BitTorrent: The 'one third of all Internet traffic' Myth"

However, if there is a capacity crunch in the UK, and Steve Hewlett claims that "Britain's internet infrastructure is heading for the buffers", then the relevant regulatory bodies have surely got a more pressing issue with the misleading way broadband is sold to consumers in the UK, rather than tracking down exactly what part of the growth of usage is the fault of the BBC.

When I looked at Broadband Choice yesterday, there were 44 packages available for UK household offering unlimited broadband capacity. Virgin Media, Tiscali, O2, Toucan, Be, UK Online, Fasthosts, Demon, and Sky were offering a range of packages with speeds from the barely broadband of 512K to 24M, all 'uncapped'. They all know that they don't have the capacity to truly serve uncapped broadband at those speeds to consumers. In August 2007 Which? found that most people only get a fraction of the speed they pay for (the average speed on an 8Mbps connection was 2.7Mbps), and heavy users often find themselves caught-out by the small print of what 'uncapped' really means.

There is a second problem with Hewlett's piece as well. He cites a report stating that "the BBC is already inhibiting the growth of commercially financed on-demand services by leading viewers to expect such services to be free", and suggests that as a result of the broadband pinch "Whichever way you look at it, the iPlayer is unlikely to be 'free' for long".

It is disingenuous to suggest the iPlayer is 'free'. The iPlayer may well be 'free at the point of delivery', but for the majority of households in Britain it comes at the cost of being forced to pay nearly £140 a year for the privilege of also owning a television set. That is neither free as in freedom, or free as in free beer.

Read other recent posts about: BBC, The Guardian, iPlayer

Readers may be interested in these posts from the BBC Internet Blog which are relevant.

Ashley Highfield on the "Digital Divide"

Ashley Highfield on the iPlayer and the Licence Fee.

Er, no, actually. You don't need a TV licence to use iPlayer.

Mark, I don't believe you've understood what I wrote. I'm well aware that people in the UK people who do not have a television can use the iPlayer without a TV Licence. However, in terms of people hogging the country's broadband infrastructure, the number doing so must be staggeringly insignificant. Therefore, the service comes as part of what the vast, vast majority of households have paid for, just like the BBC's radio services and the website.

I believe BT sells transfer to ISPs at something like 56p/GB.

Some ISPs are now offering 'pay as you go' packages. I expect these will become more popular as ISPs begin to realise they can't get away with selling 'unlimited' broadband forever.

*Thank you* for finally making the point I've been screaming at the screen for weeks...

The whole point of the internet is that you when you logon, you don't 'connect' to the web, you become a part of it, and you pay for the little bit of it you're using.

If you're a member of the public, that means paying your ISP for the connection between them and your home.

If you're an ISP, you pay for the links connecting your customers to the network, and the bandwidth they use. This should mean you charge them amount equivalent to their usage and which makes your business scalable.

If you're a content provider - like the BBC or the Guardian, you pay a fortune to have your servers sit in a draughty room, that and vast amounts of bandwidth needed to deliver your content to the next point on the internet.

Since when should the BBC, or anybody else, be expected to pay the full price of the link? They have already paid once to push all their content onto the network, why should they have to pay twice and fund the cost of individual users downloading it?

This reminds me of dial-up accounts 8-10 years ago. We were all paying 4p a minute, then someone started offering unlimited net access on an 0800 number and within a matter of months numerous ISPs were undercut each other.

A couple that I remember:

'Redhotant' - personally I was lucky and got enough use out of them for it to be worth my while, however former customers may remember the hacking of 24,000 customer records and credit card details and the inevitable withdrawal of the service culminating in 80 complaints to local trading standards and a police raid.

'Giointernet' - pre-broadband, I was able to get cheap ISDN access through them for a time. However a couple of Christmases ago I was one of many customers to receive demands from a debt-collection company after the ISP had an outstanding £220,000 bill. More letter writing ensued and eventually it was all sorted out.

At least in dial-up days "contention-ratio" was a more obvious problem - if yours wasn't sufficient, not enough people could get connected.

Now however, bandwidth and so-called QoS filtering and things few people are aware of, and even fewer understand.

ISPs have jumped on the chance that everyone else is having a go at the BBC to neatly sidestep their obligation to pay for the service they claim to be providing.

Last time round they all blamed BT for the lack of a 'friaco' product, this time its the BBC (never mind that the iPlayer is nothing compared to Youtube, 4oD, bittorrent, podcasts and the countless other crap everyone is downloading these days.)

They *ought* not to be able to get away with it, but with Ofcom's utter uselessness and the lack of understanding in the media (I generally like Steve Hewlett - he's one of the Guardian's best people and I very much doubt he's intentionally being misleading, however I think he's wrong on this), I can easily see it happening.

Martin, what you've not touched on is that the incumbent cable ISP in the UK, Virgin Media, offers 'unlimited' bandwidth but imposes a 'rate cap' based on your usage during the hours of 4-9pm. It's called STM, and, like the heaviest users on the network, it affects other users indiscriminately, disregarding their historical usage.

Put it like this: if I transfer more than 3Gb of data during 4pm-9pm, the speed of my connection is slowed to a quarter of its rated amount. Granted, it doesn't stop altogether, but it's severely limited. Apps like the iPlayer, Livestation and the to-be-announced live simulcasting of all the BBC stations is going to put a fly in the ointment of many users who feel that they should be able to do these kinds of things without worrying about their connection being, in a word, throttled.

In a house of six people (with just one shared connection, because that's all VM will allow for one property), 3 gigabytes gets used up very fast just with web surfing, and that's before P2P or streaming is taken into account. It's a pain in the proverbial, and it's usually the most hotly-discussed topic on the Virgin Media newsgroups.

Until this problem is resolved by the ISPs pumping more raw bandwidth into the core network, we're still going to have these chicken-and-egg problems... I'd rather pay more for a connection which I know has no caps or limits on. This predicted explosion of usage won't REALLY take off until users can be sure that they can download whatever they want on a whim without being penalised financially or with a cut in their connectivity's throughput for hours just because they fancied watching News 24 over the web and downloading (and seeding) some episodes of QI.

Just to remind everyone. I am on a mighty 31.2 Kbps dial-up connection here in Crete due to my local telephone exchange being made of twigs and chicken wire. Your stories of transferring 3 gigs of data in the space of less than a few days are bringing stinging tears of slow internet pain to my eyes...