There has been a headlong rush to get your applications and presence on Facebook this year, but I spotted on the London Underground the other night the first time I'd seen a Facebook group included in an advert alongside the more traditional URLs.

It all looked a bit clumsy though. I've written before about Facebook's need for shorter 'nickname' URLs to make the content more linkable, but it seems that this need extends beyond personal profiles to groups.

The advert was for The Careers Group at the University of London. Alongside their URL they stated:

"Join us on Facebook. Search 'The Careers Group University of London' to find us on there" 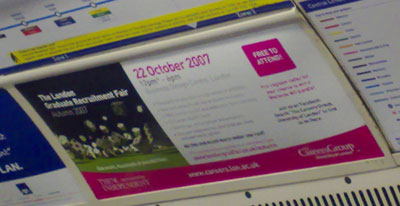 It puts me in mind of ye olden interweb days when people had to spell out 'http://' in front of the web address on their adverts. Or when small companies like Reckless (where I worked) happily advertised URLs like 'http://www.dircon.co.uk/users/~reckless' with obscure characters thrown in for free. Mute records used to include the lengthy instructions:

Mute's web site - http://www.mutelibtech.com/mute/ - or via the Mute Liberation Technologies Bulletin Board, which can be dialled up on +44 (0) 181 964 8223. Users going through the Internet should Telnet to mutelibtech.com.

If Facebook do want to become a platform that can be regularly used for offline marketing, they need to do a bit of work on their URL architecture.

Apologies for the poor picture. It was an Nokia N95 trying to take it from the other end of a moving train, so I was impressed in the end I even managed to get the right advert in the frame.

Alternatively they could set up a simple redirect. Something like lon.ac.uk/facebook.

This seems to happen a lot with Facebook. I often get excited emails from creative / media types saying "we're on facebook!" to which I reply, "where?" The notion of sending a link doesn't seem to occur to them.

Doh! I can't believe that didn't occur to us. Never mind - next time (probably too late for the next round of tube advertising but...