The Daily Mail falls for internet myths about left-handed people

The Daily Mail pulled out one of those hoary old standards of feature journalism yesterday. Following findings by Chris McManus that the incidence of left-handed writing appears to have increased in the last century, the Mail trotted out Michael Hanlon to write "Why it's really alright to be left-handed!".

It fails the substitution test, of course.

His 'light-hearted' piece about the historical prejudice that left-handed people have faced is littered with lots of "amusing" nicknames and stereotypes about us. If, for "Why it's really alright to be left-handed!", you substituted why it was really alright to be black, Jewish, homosexual or a woman, and then included plenty of their corresponding historically abusive nicknames, it would have been unpublishable.

Still, enough of my persecution complex.[1]

The bigger problem with Michael Hanlon's article was with his fact-checking.

If you are going to casually stereotype somewhere between a tenth and twelfth of the human race, you might at least make sure the examples you pick are left-handed people.

The article leads with a big picture of Marilyn Monroe. 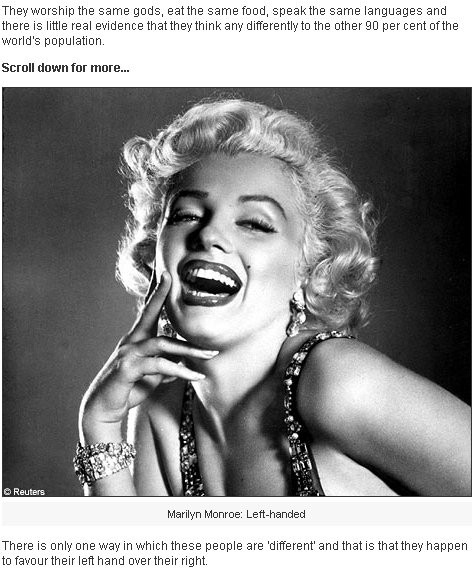 Sadly for the Mail, her being left-handed is a notorious internet-fuelled untruth, which even left-handed websites have previously fallen for.

The Daily Mail have at least had the good grace to publish a user comment exposing the error.

"There are many screen babes including Angelina Jolie, Nicole Kidman, Julia Roberts, Goldie Hawn and even Goldie Hawn's daughter Kate Hudson who are all left handed, but Marilyn Monroe was actually right handed and has become left handed through internet myth!" - Anderson, Winchester

In his article, Hanlon also relates a tale about the BBC's Test Card F:

"Perhaps the most palpable recent example of prejudice came with the famous 1960s BBC TV test card which showed a girl playing noughts and crosses with her toy clown.

When it was realised that she was holding the piece of chalk with her left hand, the story goes that BBC executives had the picture reversed to make her right-handed." 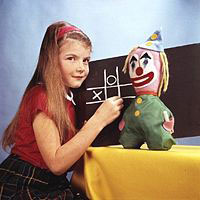 The inclusion of the phrase 'the story goes' implies to my mind that he either couldn't verify the story or didn't want to. Either way, it is repeating something that appears to be simply untrue.

George Hersee, the father of the little girl depicted in the picture clarified this story ten years ago in 1997.

Incidentally, Carole, who has her own page on IMDB, recently appeared in The Telegraph to celebrate the 40th anniversary of the colour test card.

In the process she smashed one of my own childhood beliefs about the test card. Asked who won the game, she revealed she wasn't really playing noughts and crosses with the clown. In fact, the game was painted onto the chalkboard, and the 'x' was there to mark the centre of the television screen.

Mind you, even as an adult, the clown still looked a bit creepy to me... 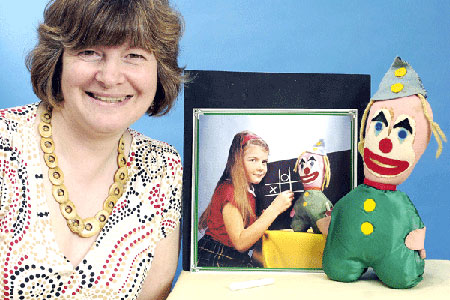 [1] I at least got to be left-handed. My dad was forced to write with his right-hand against his natural inclination, and my grandad used to be beaten at school for wanting to put the pen his left-hand. Although I stuck with writing left-handed, I did, though, have to humiliatingly hand my biro pen back to my teacher in junior school in front of the rest of the class, because my writing in ink was "too messy". My trailing left-hand smudged it as I wrote before the ink had time to dry. At least these days I instead get to use computers with a GUI mouse device or touch-pad designed to be used by right-handed people. Oh, hang on a second... [Return to article]

interesting article, you are right there seems to be more left-handers may be they're not being forced like they used to be, to use their right-hand in schools.

You make a number of good observations about journalism there =D

who ******* cares. most left-handed people do not feel persecuted, picked upon, nor do they feel harrassed (i have many cackhanded friends). Most people have a minor 'physical difference' from the mythical majority: red hair, small penis, overweight, stutter, dark skin, white skin, loads of freckles, extra nipple, ... left handedness is similar in importance and is not even bloody visible. Grow up, cackhanders, you're really not special because you are left handed, and you are certainly not a part of some picked upon minority (unless idiots like this guy decide it is an issue).

Yeah Stavros, **** me and my stupid ideas about feeling picked upon because none of my schools had left-handed sports equipment I could use, and marked me down for smudging my hand-writing when I first started writing in ink. I should have just sucked it up, grown up, and followed the example of someone like you, going around trolling on topics where I seem very over-excited and abusive about proving they are not worth getting excited about.

Way to go setting the record straight as far as us lefties are concerened...

Indeed; as a left-handed person, I am just glad that we live in an era where they don't try to "retrain" us into being righties... Lefties of the world unite!!