The recent announcement that Apple (computers) and Apple (Beatles music) have settled their trademark differences has prompted a great deal of speculation that the Beatles catalogue will finally become legally available on digital music download stores.

There has also been speculation that when (rather than if) this happens, thanks to the new chart rules, the Beatles could clog up the UK singles charts as people rush to download tracks from one of Britain's most successful musical exports. James Masterton has a pretty good line in rebutting this - citing the re-release of Beatles 7"s during the seventies, and pointing out that contrary to the hype, there have been plenty of ways to get The Beatles music onto your iPod or mp3 player by purchasing the physical CDs, or using allofmp3, or illegal sources of music distributon.

This isn't the first time that The Beatles have been late to a new technological distribution of music - it wasn't until 1986 that their albums were made available on CD. That release was also stoked with controversy. They retailed at full price, which for albums like "Please Please Me" or "With The Beatles" meant the customer shelling out the same amount as for a new release CD for barely 30 minutes worth of music from over twenty years ago.

Equally, fans were unimpressed that there was no choice available between mono and stereo mixes of the records. On albums like "Revolver" and "Sgt Pepper" the differences between the mixes can be quite significant. And the level of care and attention was different when they were made as well - the mono mix of "Sgt Pepper" was done with the band present - the stereo version that was released on CD was completed without them.

This time around though, The Beatles have an incentive to get their music into digital distribution channels sooner rather than later - which is the ticking time-bomb for them of copyright laws in the UK. In six years time, the first year of their recorded catalogue comes out of copyright, and they and Apple Corps will no longer be able to control the distribution of their early work. 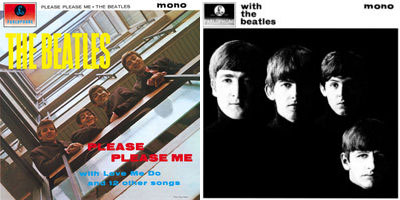 Which brings me back to an idea I have mooted before. Having the copyright on your recordings expire in the age of digital distribution ought to be an opportunity for artists, not a disaster. Artists who have been campaigning for an extension of copyright law in order to protect their income could instead be reclaiming their material for themselves.

I imagine a music download site run as a co-operative by artists from 195n onwards. They can sell their original recordings which have become copyright free on their own terms. They could use the site to additionally market their current activities, adding adverts for their current reunion tours, gauge demand for their music, and sell their merchandise. They can even, if they want, use it to cross-promote any tracks that are available through the digital stores on which the major labels still have a stranglehold.

For years, artists who made recordings in the fifties and early sixties have earned a fraction of the money generated by their recordings, whilst the majority of that money has been raked in by multi-national music conglomerates who often take the bare minimum effort in remastering and repackaging the back catalogues they have acquired, and reap the financial benefit.

With my suggestion, each month, as the 50 year copyright limitation takes effect, the site could add new artists and new material. Songs coming out of copyright could become the driver for what is promoted and what is new on the site. The little guy taking on the big industry angle of the story would be guaranteed to generate press coverage.

The Beatles themselves were the victims of not fully controlling their recorded output in the early days of their career, as material recorded when they were Tony Sheridan's backing band got repeatedly re-released on various labels with "The Beatles" name as the main attraction.

Of all the recording artists from the 50s and 60s who could make a system like this work, they are surely the best placed. Maybe they can afford to hold out for another six years and finally take full end-to-end control of the distribution of their own music?

You refer to the Beatles as one of Britains greatest musical exports. This is so but it implies others are of equal. Not so. The Beatles are the BIGGEST, nobody else is even close. Do some research.

Hi, Martin. I am very interested in what happens once their copyrights expire in four years time and your thoughts on this matter. McCartney has recently been quoted as saying his copyrights revert back to him soon anyway so he no longer pursues buying them back from ATV. I know little about copyright law and am confused by the way McCartney seems to be confident of ownership yet you claim he will have no control over them. How can this be? What am I missing here?

As I understand it, on the U.S. federal level, the entire Beatles oeuvre has been in the public domain since day 1, since sound recordings could not be copyrighted in the United States until 1972.

Of course, there was a patchwork of state laws that the 1972 copyright act eliminated, and I'm sure the Beatles' attorneys could keep you in court for a long time suing on a state by state basis