The BBC gains an International Homepage at bbc.co.uk

Today the BBC launched an International homepage at bbc.co.uk. From the UK you can see it by selecting the international version using the (frankly non-standard behaving) radio buttons at the top of the homepage. Outside the UK you should now be seeing it by default anyway. The project to launch it has been my main body of work over the last few months - and one of those frustrating projects that I didn't feel I could write about on currybetdotnet until it was out and open in the wild.

If I had been writing about it for the last six month, you would have noticed a distinct change in attitude from me over that time. I can honestly say I went into my first meeting about the project thinking "What are they thinking of? Why on earth do we need a different homepage? Why are these people trying to take away my audience?", but over the course of the project I have completely changed my mind.

In part that change of mind was to do with the audience reaction we got to our special Dalek homepage. There was a lot of research about the needs of our international audience, but I initially felt some of it wasn't particularly useful. As you can imagine, if you ask someone whether they would prefer the content of a website to be relavent and local to them, nobody is going to say no. However at the time of the Dalek special there was one particular email from Singapore that stuck in mind. It said something to the effect of:

Does the BBC really think the most important thing going on in the world is what is on the TV in the UK tonight?

That one email alone was an epiphany that convinced me that we were indeed failing our international audience with the sole UK focus of the homepage.

As well as the new homepage, we also launched new portal pages for international TV and Radio, and a new World Weather homepage. [You'll need to select the international edition from either News, Sport or the homepage to view these pages]. 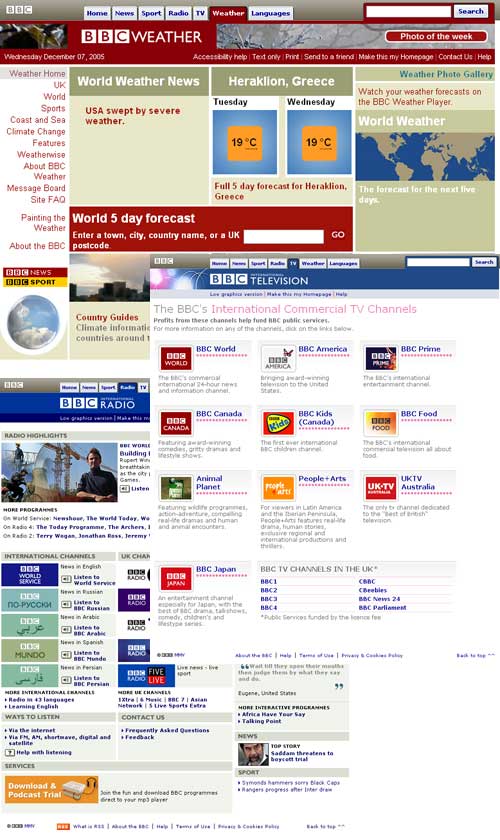 It was quite a complicated launch process today, with the project as a whole involving six different BBC divisions, and today's roll-out involving not just the four portal pages, but changing all of the banners on News and Sport, changing search templates, and changing the UK facing toolbar across the whole of the site. And the help pages. And the Privacy Policy and Cookie details page. And we even enlisted the public to spot typos for us! However I am happy to confirm that the space age has really finally arrived at my house. I actually made the the most significant changes to the BBC homepage for two years from my laptop at home. 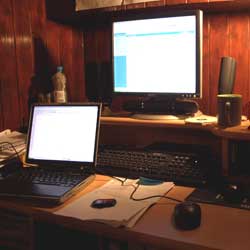 This is probably only affecting me, because I use the BBC News World edition (it being better on world news, amazingly, and less full of the entertainment crap that passes for "news" in the UK).

Sadly, they've now crapped up more of the website to take notice of this, so now the weather page is telling me about severe weather in the US, and the TV pages are suggesting I might want to get my cable company to offer BBC America.

Look, dingbats, I'm in the bloody UK! I even say "bloody", you bollock-heads! And "bollocks"! Don't take my choice of news page as something more than it is, OK?

I have to say this is one issue that we discussed a lot within the project team. The problem comes down to whether the inconvenience to people who want a world cut of the news but want UK for everything else outweighs the inconvenience to people who want to change their default edition for everything having to explicitly request it on seven separate sites (News, Sport, World Service, Radio, TV, Weather and homepage). I know this is one area where the project team will be looking particularly closely at the feedback we get. Rather like the old quote about democracy, I think the approach we have taken is flawed, but it is less flawed than the alternatives.

In fact there are all sorts of odd user journeys if you stray from the international edition pages to content that only has a UK edition, like the Radio 4 site. We also had a real issue of how to provide as consistent as possible experience for someone who refuses cookies (or has them disallowed for them or regularly cleared for them in a corporate environment) and has javascript disabled but wants an edition different from the one their IP address is telling us to serve. In fact we often got ourselves in quite a tangle discussing all the myriad edge-cases, when we know from experience that only around 5% of the audience ever changes edition.

On a personal note today has been quite momentous. For the last few months the International Facing Homepage project has been my main piece of personal project work. Up until today I have simply been focussed on getting it launched. Today, with the thank you emails sent and (except for a couple of inevitable minor snags) the project put to bed, I finally really feel like I am leaving the BBC at the end of Friday.

Mind you the whole thing nearly never happened at all today. Literally as I made the amended UK homepage live, a bleeping alarm went off in my house. I traced it to our electricity key meter over the stairs, where I found out I was 28p worth of usage away from having no electricity in the house, and therefore no computer to make the changes happen. Now that would surely have been one of the most bizarre delays to a BBC project ever.

Interesting that the international version contains a substantially nicer design and the intergration of tabs into the lower content works much better than the existing UK version. IS there any change on the horizon to do the same thing with the UK version..?

Radio button used as tab selectors, without a 'submit' button?? Very definately 'non-standard behaving', and I'm sure Neilsen would have a fit...

>> IS there any change on the horizon to do the same thing with the UK version..?

Not planned as far as I am aware. I think the new coloured tabs have worked well in testing, but I have to say I would rather we had this style of tab across the whole of the site, or not at all

>> Radio button used as tab selectors, without a 'submit' button?? Very definately 'non-standard behaving', and I'm sure Neilsen would have a fit...

We user tested them and they worked very well indeed - nobody seemed to have any problem with it. The designers were keen for the switching mechanism also to act as a signal about what 'state' the page was in. Myself I find I click on the text anyway - we've made these regular anchor links through to the pages to assist people who have difficulty getting a precise control on a mouse