Well it must be coming up to Christmas, as we are beginning to see the end of year frenzy to rate events, give awards, and generally reflect on the previous 12 months. Currently on bbc.co.uk my team are managing the collating the results on three very different votes, all of which are what we call 'TX critical', meaning that the result will shape or impact upon broadcast programming.

First up is the annual vote on the BBC Scotland Celtic Roots site for the Scots Trad Music Awards. There are quite a few categories to vote in, and it is split across three pages. I have to confess that due to my ignorance of the subject matter I haven't submitted a vote on this site. 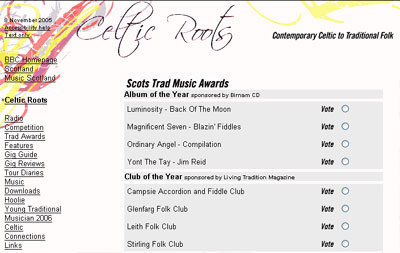 I have, though, cast my vote on the TV Moments site. This is a vote to determine people's favourite moments from television in the last twelve months. Interestingly you can view clips of the programmes, regardless of whether they were originally on the BBC or not - the rights clearance for that must have been a nightmare to negotiate.

2005 TV Moments is asking you to vote for your favourite television nuggets from 2005.

From historical moments, like this year's Live 8 concert; thrilling moments, like England's momentous victory in the second Ashes Test; or just plain funny moments, like Les Dennis' Mavis impression in Extras - we'll be asking you to vote for your favourite clip in bi-monthly categories. Click here to view the clips and cast your votes.

The year is broken up into 6 chunks, and you can vote for an option in each. The team have come up with a really nice way of allowing the user to vote in the sections individually, and the sections are then hidden from view so that the user can go on to vote for another clip from another timeframe.

I didn't have a hand in the nominations myself, otherwise it would have just been a poll of which was the best Doctor Who episode, plus a token nod to Lost, Arrested Development and The Thick Of It for balance ;-)

The final vote of the three isn't so much a poll of the year as a poll of the years, as Simon Mayo on BBC Radio Two seeks to find out which was the best single year for music from "a British prospective", taking its cue from the 50th anniversary of the birth of rock'n'roll. It seems a slightly odd choice for a vote to me though - after all, for every great year of music you can point at the equivalent of the Vengaboys, Birdie Song, Pipkins or Cliff Richard Christmas single that scarred the musical landscape of the year.

The team building the site, though, have done a really good job of unearthing lots of multimedia content to go with it though - and it is interesting to see the extent to which the online extension of a radio programme is inviting the audience to watch accompanying material. 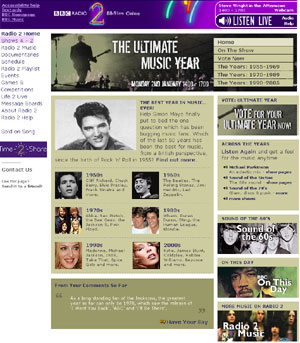 My vote went to 1981. Whilst history currently frowns on the taste of the 1980's (although they'll be ultra-fashionable again once the nineties start looking really poor quality) I was ten and just beginning to tape stuff off the radio and follow bands.

Still, with all this high profile voting activity it was actually something tucked away on the CBBC site that made me happiest today on the voting front. On the cartoons page of CBBC they are running a little vote for fun to see who comes up with the best ideas - Dennis the Menace, Stuart Little or Mona. It may not be the most earth-shatteringly important question in the world, but it is the first time that our new online voting system has been used publicly.

We are at the first stage of rolling out an application that I have been working on the product development of for around two years. It will allow production staff a much easier way of embedding votes into their bbc.co.uk pages, whichever content production system they use. The templates are more flexible (being controlled mostly by CSS alone), and the back-end scalability and security of the system is a vast improvement on our current application. Gathering and distilling the requirements from the whole of the BBC into one application that could handle the diversity of the requirements, present the entire flexibility of the system in an administration interface, and still be easy to use has been one of the most difficult projects I have worked on at the BBC.

I also severely doubted it would go live before I left, so today I am one very happy bunny.

It's funny how I haven't seen you for more than a year, and yet your television bests almost exactly match mine... However, for completeness I would have to add Deadwood and Carnivale from HBO.