Things Our Neighbours Have Thrown Into Our Garden

Our house used to be pretty quiet when we first moved in. On one side was a young family with a polite chatty 3 year-old, and on the other side an old lady who only bothered us if she thought our drain was overflowing into her garden, or if she we thought we were cooking "that indian food" because she used oxygen and "that indian food" affected her breathing.

When she died a year-and-a-half ago she was replaced by our present next-door neighbours. And that is where it all went wrong.

It isn't simply the inane chart R'n'B music leaking through our walls, although that doesn't help. If my iPod updated the play count every time I heard something from any source, my most listened to tune in the last two years would be "Fuck It (I Don't Want You Back)" by Eamonn, which was on a constant loop in their house for around four months last summer.

Most Sundays we are woken at 8am by a screaming match between them. We know everything about their sex life (or lack of it) thanks to a two hour stand-up row which took place with him outside the back-door locked out of the house by her. That culminated in him kicking in the front door to get himself back in.

Despite not having as much sex as he would like, they have managed to breed on three occasions. The three kids include a new born, a two-and-a-half year old, and a 9-10 year old daughter. Their idea of childcare for the two-and-a-half year old seems to be putting him out in the garden for hours on end left to his own devices shouting "Mum, mum, mum" at the top of his voice. The best conversation I have had no choice but to overhear because it took place outside our kitchen window was between the mum and her friend, contemplating whether the elder daughter should call "it" her "minge" or her "baby-hole". They are so noisy that we now rarely open our doors or windows unless they are out.

Still the really low-level attrition is the fact that they use our garden as a rubbish dump. When they first moved in we gave them the benefit of the doubt. The foxes might have bought the stuff into the garden. Or their dog might have got in. I know I risk sounding like some kind of Victor Meldrew character here, but it is sometimes literally crap they throw into our garden - dog shit and dirty nappies.

I once saw one of their friend's children throwing stuff over our fence whilst I was at the kitchen window. I went out and said "Do you mind your kids not throwing stuff into our garden?". The reaction was first to say "What stuff?" even as the child stood there dropping things over the fence, and then ask "What's with your attitude?".

You can't really argue with that. Sigh.

Anyway, I figured I could either get myself wound up and keep delivering rants like the one above, or I could at least try and get something humourous out of the situation. I've opted for the latter, and so I am pleased to present my latest Flickr set - Things Our Neighbours Have Thrown Into Our Garden. This weekend we have three-quarters of a frisbee, some electronic kind of antenna (should have probably plugged it into my Theremin and used it as a 'found sound'), a plastic sea anemone, and a chewed up racquet. 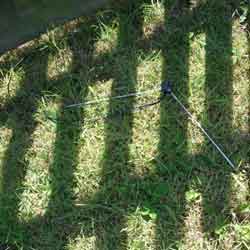 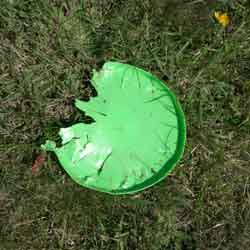 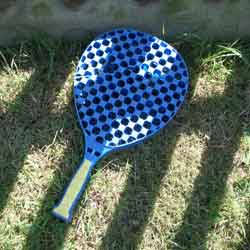 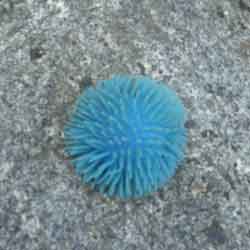 No doubt there will be more soon...

Martin,
I just had a quick browse around your website, quite entertaining and informative! I pity you with regard to your neighbours, hopefully they won't stay too long, maybe they'll get their house repossessed. Do you return their lost objects?

>> Do you return their lost objects?

No, but we are thinking that when we move, anything we haven't sold or put in storage may end up on their side of the fence ;-)

This is so so funny and im really glad to see people choosing good humour over aggression! Well done you!!