Last year I had the good fortune last year to get a guided tour around the BBC's Film Archives at Windmill Road. The numbers of items stored by the BBC's Information & Archives department is staggering - I noted down numbers like "26 million newspaper cuttings, 3 million still photographs, 4½ million pieces of sheet music", and that was just a fraction of the statistics quoted at me. The film archive has been at its present location since 1968, and now consists of a huge collection of bar-coded items with data on their transmission date, producers and contributors. 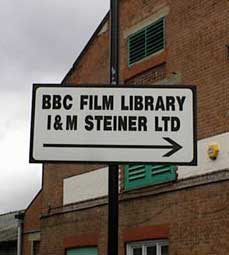 We got to see some of the work of preserving the material - including a glimpse of one of the BBC's original Quad 2" VT machines. They had been invented at the behest of the U.S. Military (who wanted the bandwidth to record all of their radio transmissions) and Bing Crosby, who was tired of performing the same show twice for the benefit of the East and West Coast time zone differences in the USA. They were incredibly expensive to use - the tapes cost the same as a Mini car back in the 60s, which goes some way to explaining why they were frequently wiped and re-used.

As a Doctor Who fan I'm very sensitive on the issue of the BBC junking its archive material, and the archive still has an active policy of wiping material, destroying 30,000-40,000 items a year. In fairness, the space and cost of storing everything is simply insurmountable. They have a policy of keeping all drama, news and sport, but for long running low re-use value programmes like games shows or quizzes they keep only example episodes. The archive even retains the untransmitted news items that have been dropped at the last minute due to developments in other stories - imagine that, rows and rows of footage of dead donkeys. Judging which ones to keep isn't a job I would fancy. Imagine being the person who sanctioned the deletion of a "low re-use" value programme that turned out to be the appearance on The Weakest Link of a future z-list celebrity / pop star / serial killer / politician.

They are also destroying their archive of purchased film - it is unlikely that the BBC would ever now transmit a feature length film from a print, and it is virtually impossible that the BBC would have the last surviving copy of major studio output.

The conservation process is ongoing. Much of the older stock deemed worth keeping was converted to the digital D3 tape format during the 1990s. However, Panasonic have announced that they are no longer going to manufacture the players for the format - which leaves the BBC with the task of buying up as many machines and spare parts as it can, and then to look for a format to convert the D3 tapes into. A real problem is that at the outset you can't tell how well a format will last - until it has been around for 10-15 years you don't know which kind of controlled conditions it needs to be kept in, or how easy it is to keep the equipment running. In many ways digital tape storage has made the problem worse. You can get partial recovery from a damaged analogue tape with a loss in quality - if you can't unscramble the zeroes and ones from a digital source all you have is a collection of zeroes and ones.

We were allowed into a room where audio preservation takes places, which included a machine for playing 16" records, as apparently early radio shows were transcribed live onto 16" vinyl discs. To my fascination they also have a machine for making digital copies of old wax cylinders - and it was demonstrated by playing a wax cylinder from 1910. I have never actually seen a cylinder played before, so I have to confess to being a bit over-excited by that. Last year the Radio 4 programme Gramophones and Grooves was playing out some of the material that I guess was recovered and archived on either that equipment or equipment like it.

Of course, sometimes the demand for archive material can be urgent, and Windmill Road is equipped with an uplink that allows them to retrieve a tape from the archive and have it available in the transmission chain within ten minutes. As a child of the cold war 80's I always imagined the end of my life would be due to some nuclear conflagration in London. It was reassuring to now think that if the main broadcast playout centres were ever destroyed, Windmill Road should be far enough out to survive, and at least the nation could then still be fed a diet of comforting repeat material direct from the archives.

The thrust of the tour was really to explain how the old fashioned archivist was on their way out, to be replaced by the "media manager". The concept is that by strategically placing people within the BBC in the right departments with the right skills, hopefully a lot of the documentation can be done upstream. There was a great example in the introductory video of how annotating material can go wrong, with the story of the BBC's record library in the 1960s being a card indexed affair, where due to a typo you could obtain records by "The Bench Boys". It is a skill that is increasingly vital as the BBC aims to move towards all digital production on the desktop. The seemingly trivial minutiae of the office, like the naming conventions you use for saving digital files, become the only equivalent of the big felt-tipped writing that was used to identify 2" tape reels. In the future nobody is going to rescue a canister of film from destruction because they notice a moth-eaten label that says Doctor Who and The Daleks on it, they are going to be looking at a hard-drive with filenames, which hopefully with the correct training at the right time will be more descriptive than early_rushes_episode_7.format!

fascinating! how can the general public tour this facility?

your comment that the "old fashioned archivist [is] to be replaced by the media manager" doesn't exactly inspire confidence. in my opinion, replacing professional archivists and librarians with filename conventions and metadata will not exactly work very well in the long run.

Fascinating, humbling, exciting, a treasure for the ages. The library at Alexander. Marvelous.

its no wonder things go missing and have been wiped here the place is staffed by morons who are not interested in the material and there are plenty of wacky backy smokers on site, at least 1 female admit they cant face the place straight! the management don't care either its just a job near a pub to them.

Hoping you are not getting rid of to many Good Shows.As your Director General said for the first time there is a Easy and Affordable way of making this Treasure Trove of BBC.Content Available to all.Free to Download and Save.This alone will help the BBC.Many Many People out there want these Programes Back to Watch and Keep.How can we let them Down.They are our Public.We have the Biggest Library in the World for our Public to look at.And Download what ever they like.So please when you are ready with the List of Radio and Television.Programes from the Past.Please let me know.or give me a email address I could keep in contact with you, Dont know how much this means to Many Many People.Thank you Again