Was the Guardian right to open comments on their Vauxhall helicopter crash live blog?

The Guardian’s website has been no stranger to controversy over the last couple of weeks, and yesterday was no exception, with the decision to have comments open on the live blog of the unfolding reporting of the helicopter crash in London.

A lot of comments questioned why comments were enabled on the story, some calling it “electronic rubber necking”:

“Seems a bit wrong to have comments/idle speculation turned on for a fatal incident that is just unfolding.” - Polymorph

“If you want to reign in speculation why not switch off the comments on this piece — utterly inappropriate. Sometimes the Grauniad’s web folks really beggar belief.” - WitNit

Another issue was users posting comments in poor taste, and a lot of comments were moderated off.

I have some sympathy with news organisations here.

If I build a wall, and someone comes along and spray-paints something offensive over it, and someone else pisses up it, is it my fault for building the wall? Or their personal responsibility not to behave anti-sociably? Nobody compels people to go on to a breaking news story that involved people being killed and try and be funny. They do that because they personally have a lack of empathy.

Some people posting comments were aggravated at the Guardian reporting it via a live blog:

“The Wall Street Journal have a salient take on the accident and even the owners. Anyone wanting some decent journalism can find it here…Oh yes, not a single fucking hashtag or twitter comment to be found.” - andyljus

“I just don't understand The Guardian’s incessant need to do these blow-by-blow live accounts of things like this.” - Britcominghome

“I for one am glad that there is live text on this incident. I wouldn’t be able to think straight without regular updates every minute. It is certainly a vast improvement over the days when one just read detailed and comprehensively thought-through news reports some time after the incident.” - TheRealElPolloDiablo

I still personally think that there are two problems here. No news organisation has yet seemed to have cracked the design problem of conveying to users that “this is the live blog of a developing situation — the 500 word write-up will be along later as usual.”

As one commenter put it, to someone complaining about the live blog format: “Yeah but I’m not sure if I’d be that interested in reading a detailed report about it the day after tomorrow.”

The label “live blog” itself is still problematic, in my opinion. I’d like to see news organisations try labels like “Unfolding story” or “Reporting in progress”, giving a stronger sign-post that incrementally updating a breaking news story as information arrives is not the same as sitting down in front of the X-Factor on a Saturday night to write a simultaneous TV review. 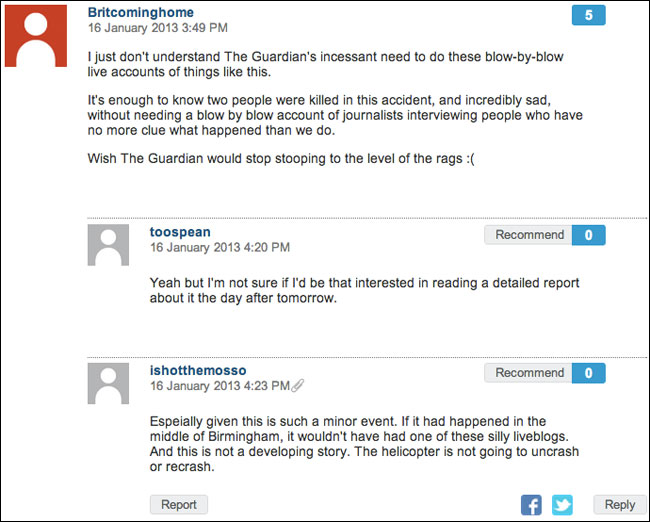 However, there was a very good journalistic reason for opening comments. With the incident happening in a densely populated part of the capital, there was a good chance of capturing a lot of eyewitness accounts in the comments. Other websites like the BBC achieve this with an email form, but the comment system underneath live blogs is a direct way of getting content in front of other users straight away. With a guiding hand from a community host — in this case James Walsh — flagging up that kind of content, it added colour and vibrancy to the story-telling.

Direct interaction with the journalists

Having comments open also provided a direct feedback loop with the journalists reporting on the story. When users pointed out that reporters had seemed carelessly excited about getting some “excellent” stories, Alexandra Topping was able to jump straight into the comment thread with an apology and point out that a correction had made.

The Guardian learnt a hard lesson when it was severely criticised for having comments open on a live blog whilst the 2011 Cumbrian shooting spree was still in progress. I think the difference here was that the incident itself was over, it was the details that were coming through, whereas during the shooting the criticism was that people were speculating about the whereabouts of a gunman still on the loose.

The gathering of additional eye-witness accounts and some corrective information about the location and buildings involved added to the newsgathering process. Moderators were very swiftly deleting inappropriate comments, and both journalists and community staff were on-hand in the threads to reply directly with users. On balance, I think the Guardian’s newsroom and community teams made the right call yesterday.

Full disclosure: I previously worked at the Guardian, and used to design elements of both the live blog and the commenting system.

It's a bit like rolling TV news: you have the news as it breaks, then the 3 minute package on the hour. But there's maybe a similarity to the stick Kay Burley gets for turning up at a disaster and asking people difficult questions.

I wonder what would have happened at all key points in human history if the media of the day had allowed people to share what they think. It's only this generation of publishers that is finding out.

I tend to agree with you on balance but were you referring to the commenters only in regard to 'rubber necking' or the journalists too? The 'excellent' comment was innocent but people's reaction to it shows that we don't want our news outlets to be guilty of rubber-necking any more than the readers and the word did smack of that without another context.