A miserable afternoon with the EDL in Walthamstow

At the weekend I watched the EDL march through my hometown. It wasn’t an edifying sight. 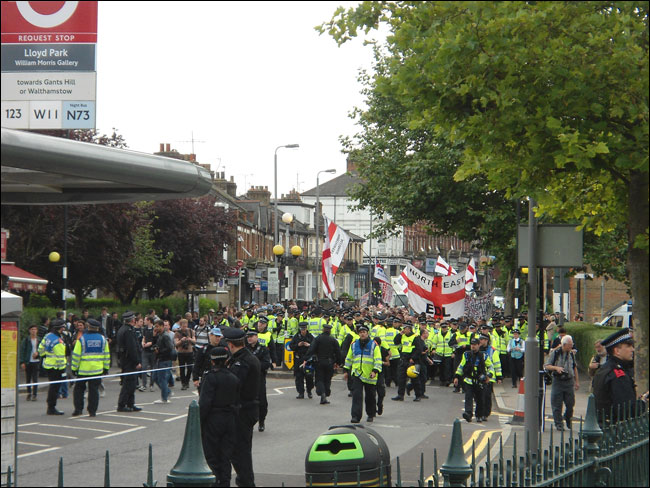 The EDL march through Walthamstow

Leading up to the demo their own website had appealed to members not to sing racist or “inappropriate” songs. On the stretch I watched them on they were singing a song abusing Muslim coppers, and “Allah? Allah? Who the fuck is Allah?”

I’d hate to see what is on their inappropriate list if those two are deemed OK.

I watched a couple of EDL supporters sitting in the gutter because they were too drunk to carry on with the main group. And on the other side the more aggressive and violent of the anti-EDL protesters undermined the good efforts of the Waltham Forest community to provide a spirited and cheerful opposition.

The EDL chose Walthamstow because, they claim, it is “the heartland of Islamic Extremism.”

By which they mean that there is an equally tiny and deluded minority of young men with nothing better to do who stick posters up declaring Shariah Law for all. The kind of people who disrupt election meetings and promise hellfire if you vote. They are just as unwelcome to the vast majority of Waltham Forest.

Those countering the protest on Saturday were culturally diverse, and generally good humoured. I think my favourite bit was when a group of young Asian lads moved through the crowd on the street to get further along the route, laughing about how “We are the reason they are here. We deserve to get to shout at them first.”

On the whole though it was a pretty depressing affair, and two things really struck me about the day. 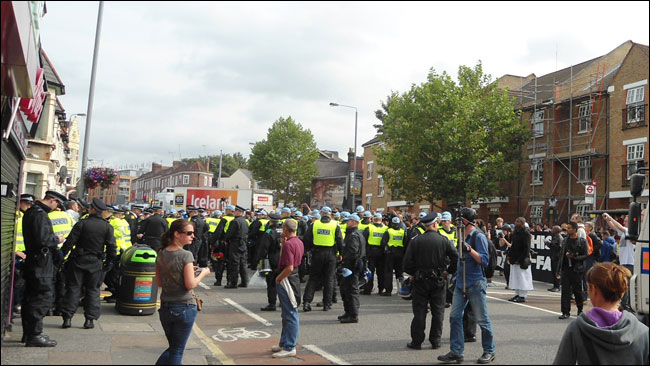 We make our own news reality

Watching the reporting of the demo unfold on Twitter and elsewhere on the web has been eye-opening in terms of the way that people simply select the news that they want to hear. Depending on where you read about it, the march was a triumph for the EDL, a demoralising defeat which might destroy the organisation, a triumph for this particular group or that particular group of anti-fascists, or a bloody riot on the streets.

An army of keyboard warriors who couldn’t be bothered to get to the march took up the EDL cause online, wildly boasting of 800 EDL members “smashing socialism” in E17. A couple of these Twitter “heroes” had a go at me online for tweeting about the march - using the typical tactic of quoting stuff they could find out about me to abuse me, whilst remaining bravely anonymous themselves. Formidable stuff.

Of all the reports I’ve read of the day, Vice’s comes closest to capturing the spirit of it - an ugly mess.

The EDL were trying to exercise their right to peacefully protest. As much as I disagree with their views, I’ve no problem with that, providing they stay within the law. And I was exercising my right to peacefully oppose them, and let them know that I find them obnoxious and unwelcome in my community. Up to that point we are equals in the eyes of the law.

What I found disappointing on Saturday, though, was the way that the police and security operation moved heaven and earth to allow the EDL march to continue. When Bell Corner was blocked, the police re-routed the march through some residential streets - which hadn’t expected to be the scene of the demo - so that they got close to their intended rallying point. Meanwhile, as I resident of the borough, I ended up stuck between police lines, unable to get back to my house. The EDL’s right to protest had trumped my right to peacefully walk my own streets.

And there was I thinking the whole point of the EDL was that they hated it when people from outside the area barged in and started getting special treatment...

Should we just ignore them?

One final piece of food for thought. I spoke to quite a few police officers during the course of the afternoon, and something one of them said keeps coming back to my mind.

“They only do this for the attention,” he said. “If you lot stopped turning out to give it to them, they’d stop doing it. The whole thing would fizzle out in two weeks.”

I can’t ignore it though.

And if the EDL should decide they want to show their sorry faces back near my home again, I’ll be back on the streets to show them that I’m English, and they don’t speak for me.