This quote from Julian Barnes was used on the front page of the Guardian on Saturday to trail a lengthy essay of his: “My life as a bibliophile”. 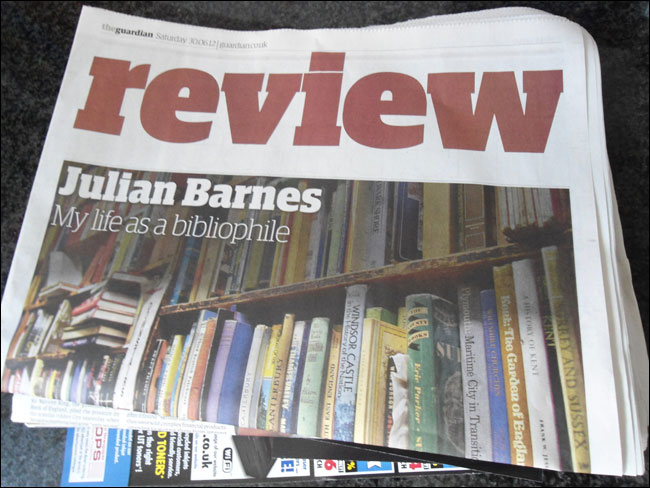 The quote is a brittle reduction of the print vs. digital argument. One could just as easily write:

“Reading Julian’s article digitally was a revelation. When he referenced John Cowper Powys's death-mask, I could follow a link to explore more about it. His mention of a particular book shop in Salisbury links through to a photograph of it as it was in the 1970s. His every word was a breathless starting point for exploring his story further. By bookmarking it I was able to save it for ever, calling it back to life instantly across a range of devices. I shared it instantaneously with a network of people I know. Later in the day I picked up a physical copy of Review in print - and what a dull comparison it made. The article was isolated, static, unconnected. I cut it out of the paper to share it with a friend, but I could only send it to one person, and once posted, I no longer possessed it myself.”

“Reading Julian’s article in The Review was a revelation. As he spoke of his nostalgia for the early first editions he collected, I could feel the ink smearing on my fingers, the weight of the paper indicating the seriousness of the topic. The article was beautifully laid out, fitting the page to perfection. Later in the day I stumbled across the article on the web - and what a dull comparison it made. The cover image reduced to a tiny picture at the top of the page - the text rendered in one long column with awkward line breaks and uniformly spaced text, the blue colour indicating hyperlinks distorting emphasis within the text. Buttons and adverts and wretched interactivity distracting me from the matter at hand.” 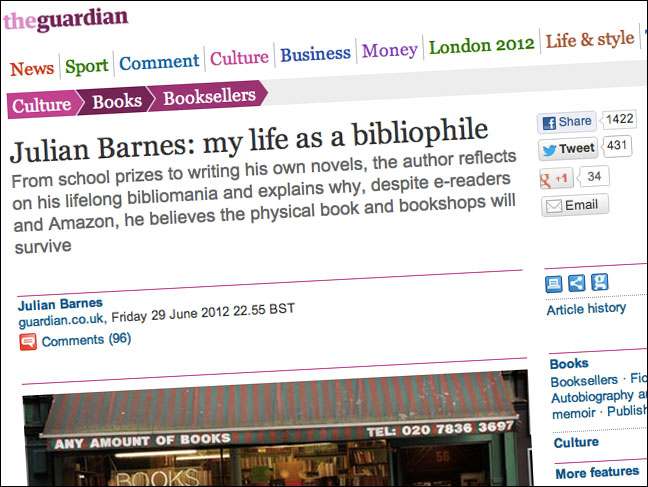 Julian’s essay is, of course, not as black and white as that trail text I quoted implies - nor as one-sided as my comparisons of the experience of his writing in the paper and on the website. His prose is more devoted to a life time of collecting books rather than denigrating the future, but he does make one factual assertion along the way that I very much disagree with:

The uniqueness of print artefacts is not always an advantage. Entire academic careers have been built on trying to decipher which of the variations of printing error in the surviving folios of Shakespeare’s work represent his true intentions. Furthermore, I’d argue that it is only every poorly and lazily designed Kindle download that feels and looks exactly the same.

Considerable thought is being given to the design of ebooks, as this fantastic essay, “Hack the cover” by Craig Mod illustrates. The new features that Amazon have introduced in the Kindle Format 8 publishing mark-up to support the Fire device are a far cry from the black and white prose of the first generation of ebook readers. Experiments in colour electronic ink that can support video playback promise new ways for authors of fiction and non-fiction alike to allow their stories to unfold in front of the reader.

Julian’s piece coincides with Independent bookseller week - a cause which, despite my obvious love of technology, I wholeheartedly support. Go and buy books. The music industry has gone through a similar transition to digital, and Record Store Day is now one of the highlights of the musical calendar - when artists great and small produce special recordings in exclusive formats to rekindle the fanboy collector in me.

Music retailers reinvented themselves as places to buy merchandise and music accessories alongside their dwindling stocks of physical products. Book retailers need to discover how they are to avoid just being remote warehouses for Amazon and their ilk, simply being reduced to places where customers can flick through the wares and then effortlessly scan the barcode with their phones to get a better digital deal elsewhere. Reading clubs, author signings, community events for parents, acting as a filter through the noise of self-publishing, these are all possibilities when trying to shift a bookstore from being a physical retail space to being a physical space that enables book-related services.

Physical books are not purely an end in themselves, they are a tool to enable story-telling which has served us well for hundreds of years.

Maybe it is the beginning of the end of the era of physical books, but rather than simply mourn their passing, we should also look forward to what promises to be a golden era of digitally-enabled story-telling.

The problem with these book sniffer pieces, is the presumption that ebooks stay like this - dark grey, grainy, badly set type on a grey milk. Like 1995 era websites, of course they are rubbish. They won't stay that way.