“Sweat the 1%” - what newspapers could learn from Facebook Marketing London

Today I was talking at Facebook Marketing London 2012 about the Guardian’s Facebook app. I’ve put together a collection of things I’ve previously written about the app and Adam Tinworth has blogged about my session. Here are some of my notes from what I saw on the rest of the day, and what I think they should mean for news organisations.

Facebook’s Andy Pang opened the conference with a keynote that was all about driving home the message that Facebook advertising represented good value for money for companies. He explained that when you target a campaign to a particular demographic, the Facebook system can automatically withhold 1%-2% of that audience as a “control group”. After the campaign has been running for a couple of days, they can then survey people exposed to the campaign, and those who weren’t, and actually demonstrate the difference the activity has made. This struck me as a really smart way of using a feature of the Facebook platform that the people who put adverts up on bus shelters simply can’t emulate.

Andy said they had run this kind of test across around 500 campaigns, and the delta across them was a brand awareness uplift of 14%. He claimed even higher uplifts if brands could associate their material with the activity of friends. The same ad copy, he said, got 50% more recall if users had seen it associated directly with the name or face of a friend. This is, he said, “proving the value of that social endorsement” in advertising, although it remains unclear what the value was to the person’s face who aided that recall.

The other message Andy was keen to push was that the traditional method of measuring the success of an ad campaign - clickthroughs - didn’t really apply in the Facebook space. They are much keener on the new Nielsen Online Campaign Ratings methodology being adopted as a standard currency for web advertising.

There were a lot of numbers. Tom Smith and Brett Petersen from GlobalWebIndex looked at Facebook penetration around the globe. The UK has one of the highest, and they had a useful stat that 65% of UK Facebook users visit the site monthly. That is roughly twice the percentage of people who are active UK monthly users of Twitter, Pinterest and LinkedIn, and three times that of Google+. Whatever magic sauce it is that Facebook has for us Brits, it is one that has left a lot less infrequent and dormant accounts in their database.

Tom & Brett also had a warning though - Facebook penetration seems to be dipping slightly in the US, and they are observing a move towards more specialist and niche networks.

What can you give to them...

This tweet from Russell Oakley appealed to me: “Redbull Social Media Strategy: ‘50% of people go on social media just to waste time, so let’s give them something cool to look at!’”

Ask the Facebook audience themselves, and it is clear that the three main things people want from brands on social channels is discounts, customer service and competitions. How many news organisations provide those on the platform?

Kathryn Corrick singled out some good uses of Timeline by brands, especially Spotify and M&S. She was particularly impressed that M&S appear to be using their Facebook presence to also do internal comms to staff about what is on the shop floor. Given that most of them do not spend their day sitting in front of a computer at work, Facebook is a good way to reach them.

Richard Ayers talked about Manchester City’s use of Timeline and how they had built up a record of their lengthy history. It reminded me of one of my favourite exchanges of working directly with Facebook. “Timeline can now go back to 1905” someone excitedly told me. “Hmmm, I still need 1821 for the formation of the Guardian. Sorry.”

Richard explained how City use prominent players almost as sub-brands - fully aware that at some point they are liable to leave. There is a clear parallel here with news organisations fretting about building up the personal brands of individual journalists in case they move to another job. Manchester City are committed to not worrying about the inevitable “transfer request”, and just make great use of the human assets they have to hand. Richard had by far the best screenshot of the day - the fantastic Timeline cover of Vincent Kompany’s Facebook page. 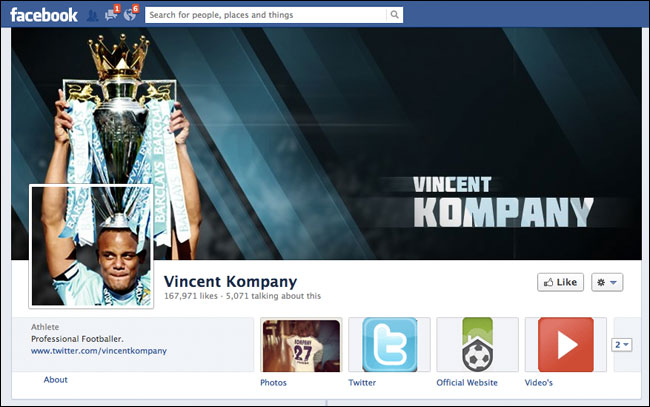 Manchester City also had the lovely concept of the FanCam - an ultra-high density 360° picture of the crowd at a home game, which users could zoom in on, find themselves if they’d been at the match, and then share on Facebook.

What does this mean for news?

Whenever I’m at these events I’m now trained, Pavlov dog style, to automatically think “Well, that is all very well and good for you lot, but what does it mean for digital news organisations?”

And again I’m struck by thinking about how little most organisations do to actively promote stories, and actively react to engagement on platforms like Facebook. Richard Ayers talked about the “bad old days” of social media at Manchester City, where they published a story on their website, the Facebook monkey posted a link to it on Facebook, and that was that. How many news organisations have Facebook pages and presences where that is still the case?

Your competition for attention within Facebook is not the traditional titles you fought for physical circulation with. Your competition is Heinz and Manchester City and M&S doing interesting things that eat into the time your audience has to spend on consuming news. You know the marketing people at events like today’s have eyeballs glued like hawks to their Facebook Insights page and as many metrics as they can glean about performance, working out how they can squeeze just that extra 1% ROI on their campaign.

There was a fascinating interview in ITV4’s Tour de France coverage this week, when the journalist was essentially trying to get a cyclist to say he was suspicious of the dominance of Team Sky. His answer was that if the bike is 1% better, and the aerodynamics of the team uniform 1% better, and the training regime 1% better, and the diet 1% better, then all those individual 1% differences start to add up to a big advantage.

Who is learning from the reaction to content within Facebook in your newsroom to avoid repeating mistakes and to reach a bigger audience next time?

Who is sweating in your newsroom to get that extra 1% out of every story you publish?