Google’s “Search, plus Your World” launch has started a round of people exclaiming that SEO is dead.

I’m trying to find out exactly when the fatality took place.

Jeremy Schoemaker posted on 10 December 2005 with the title “SEO is dead”, but if you look in the text he says it was actually Jason Calcanis who told him, during a panel session at SES in San Jose in August 2005. 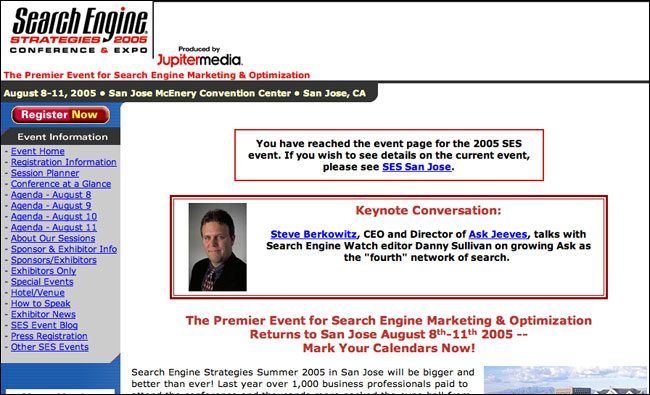 I’ve tracked down an earlier reference to it. This post by Seth Godin has a trackback to a blog with the title “SEO is dead - It's about creating compelling content constantly on a Web 2.0 site” from Bryght, at 5:32 PM on 9 March, 2005. Sadly the destination page doesn’t exist anymore.

Anybody got any earlier reports of the death of SEO demise they can point to?

Update: On Twitter John Stirzaker has pointed out to me this blog post from August 1999 declaring that “In-Site SEO is dead” is one of seven SEO myths - but Ben Griffiths spotted that it references AdWords, which wasn’t launched until October 2000, so it can’t really date from then.

Whilst you are pondering that, you might be interested in reading how Chris Moran and Mary Hamilton do SEO at the Guardian, and how I used to do SEO at the BBC.

Reference to it in Feb. 2004. href="//www.webpronews.com/is-organic-seo-dead-2004-02">Is Organic SEO Dead?! Can't find original post.
I see even keyword optimization is dead. Cool. I guess we can just copy and paste recipes from food network and rank for "make money online"?

Thanks Zack - on Twitter @johnstez has found an even earlier reference - August 1999!

Afraid not Jeremy, although Google throws that page up, if you eventually reach the article itself, it mentions "social networking" - not a common web phrase in 1998 - and WordPress, which didn’t launch until 2003.