“Trying to opt out of the social web is like saying ‘I don’t like talking to people, can I opt out of having friends’” - Paul Adams at #UPA2011

Paul Adams opened the UPA conference in Atlanta with a keynote talk that looked at how the web is being rebuilt around people. With a liberal dose of Facebook’s “Social by design” mantra, he explored the nature of our offline social networks as humans, and the differences between strong, weak and temporary ties between friends and people.

He said that worrying “What is our social strategy?” was starting from the wrong place. Since humans are social every day, social should just be “assumed” during the design process, in the same way that electricity is. Social is not “a bolt-on”.

He argued that the marketing obsession with finding “influencers” who could blog or tweet about a product and instantly make it popular was misguided, as it didn’t take into account the “influencability” of the people they were talking to. 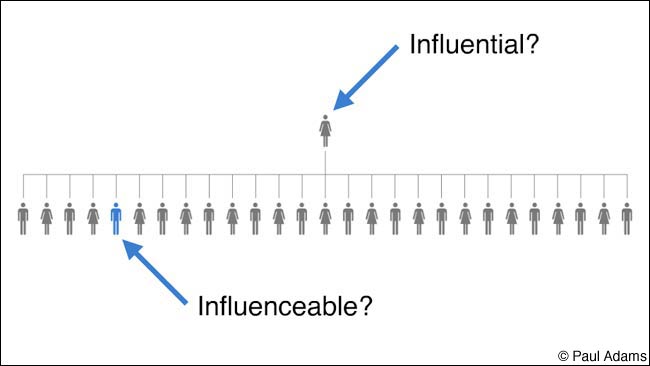 He also suggested that the way history gets re-written, that key people have influenced thousands or millions is wrong. He argued that the people on the streets in Egypt were there not because of the influence of one or two people, but because of the influence of their closest friends. He drew diagrams showing that overlapping networks of friends from different life stages and locations were almost certainly only linked by one “node”. Suggesting that any one of these “node” people was inherently more influential than any other was, in his opinion, wrong. 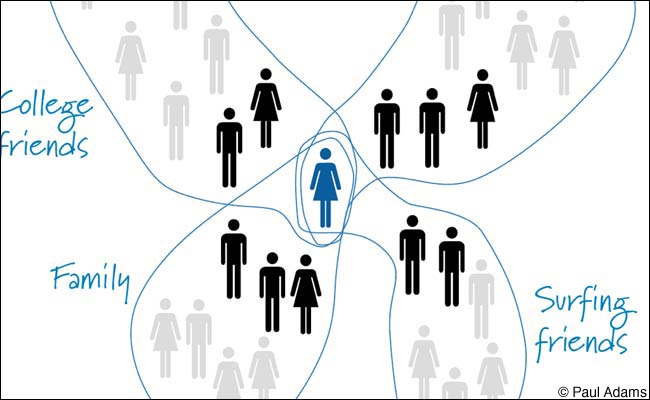 Paul’s talk featured diagrams showing we are usually the unique connection between the different groups of friends in our lives.

Paul’s view of the role of social networking in Egypt is somewhat contradicted though by the experience Guardian Readers’ Editor Chris Elliot had when he was in Cairo. He found that people very much ascribed the success of the revolution to Facebook and Twitter.

One of Paul’s key points was that people care about people, not about features. He showed a spreadsheet that the product managers of Facebook Photos had compiled as part of a competitor analysis exercise. Other services beat Facebook hands down in terms of megapixels and file sizes and photo metadata. But Facebook had people, and the killer ability to tag your friends in a photo so that they could be notified that it was there.

Adams predicted that we were in for three to five years of massive disruption for industries like music and film, and presumably news, where consumption has always been social, but where the web doesn’t currently architect around that social element. My initial thought was “Again?”. It seems that since I started working in record shops in the 90s, I’ve always worked in industries that are being constantly disrupted by networked digital technology. Luckily, I rather enjoy wrestling with that.

The theme of vertical industries being disrupted was continued in one of the other sessions on the first morning of the conference. Dan Sorvik and Elsa Plumley were presenting some innovative work by Foolproof to use Facebook to recruit user-testing participants.

With one of their offices based in Norwich, they had used targeted advertising on Facebook to find local people who were willing to take part in research, in a location where traditional subject recruitment practices were not cost effective. They were also presenting a project where Direct Line had used a Facebook app to research their design options for an iPhone app. It had given them a very rich set of data to work with.

Elsa pointed out that these kinds of social research techniques and applications are likely to disrupt the usability profession itself over the next couple of years, as in-house market research teams increasingly find ways to do direct user testing with their audience without having to involve agencies.

As Paul Adams put it during his keynote: “If you don't reorient your business around people, somebody else will”.