Today's events in Cumbria have tested some of the ways that rolling live coverage works for newspapers online. At The Guardian we closed the comments section on our live blog after complaints from users. Other papers have taken a different approach - The Sun and The Telegraph have always had comments off, but the Mail and The Times (both old and new versions) are allowing readers to comment.

One thing that has become very clear from the Express site is the problem of applying Facebook's "Like" button to all of your content.

No thanks, I don't want to become the first of my friends to 'like' a story headlined "RESIDENTS TELL OF GUNMAN HORROR", which feature as its main image "Police stand next to a body covered by a blanket after a shooting in Whitehaven". 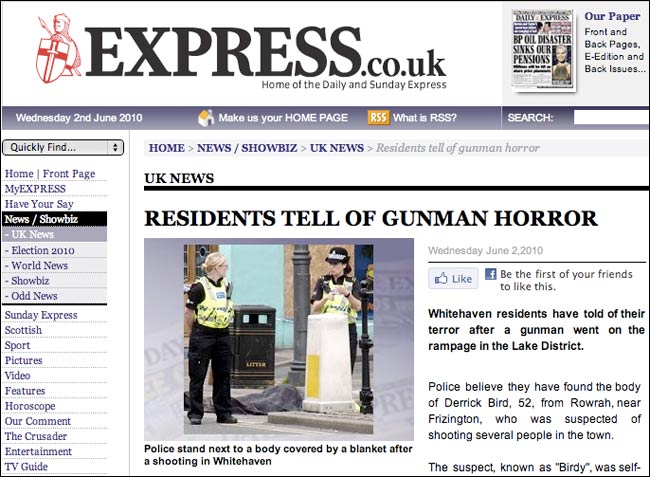 I can certainly understand your logic Martin. I think news publishers could use a bit of common sense in stories like this. Using 'Like' tends to give the impression of having gotten enjoyment from it, even if it's tragic. Almost as if it's light entertainment. I've tried to think, in these instances, of another name of button to be used, but can't, really... even the word 'Interesting' sounds slightly wrong, though I guess the very word is why we read at all...

I particularly like the 'thumbs up' icon; it's a nice touch.

It makes me think of Buddy Jesus

Mike, as soon as I posted it, I realised that there is no way in my templates to remove the Google ad block currently just under the screenshot of the Express. It will be guaranteed to have something inappropriate now just to prove my point about needing to be flexible about the furniture you put around a story.

It would be better if Facebook had chosen a more neutral term like 'recommend' or similar, for flagging up news stories.

CNN.com uses "Recommend" instead of "Like" for this reason.

The button comes with an option over the verb choice. You can choose to let it say 'Recommend' instead of 'Like'.

Funny I have experienced the exact same phenomenon in the last 24 hours. If one of my friends posts on facebook that something terrible has happened, you can't exactly click "like". And "recommend" doesn't always work either.
Maybe "I'm with you"... hmm, still doesn't sound right. Maybe a heart symbol that says "appreciate" or something like that?