A thank you to London Underground staff...no thanks to abusive National Express East Anglia

My family had a dreadful experience at the weekend at the hands of abusive National Express East Anglia staff at Liverpool Street, and an unhelpful colleague of theirs at Walthamstow Central. My reason for blogging about it isn't just to tell the story of their atrocious behaviour, but to also thank a member of London Underground staff who helped us out, and point out a great bit of user experience on the TFL website.

Because of a glitch in the Oystercard system, National Express East Anglia inspectors wouldn't let my wife through the ticket barriers at Liverpool Street after we travelled from Walthamstow Central. Rather than try to help her, they bullied and intimidated her into tears, leaving her stranded on the opposite side of the barrier to me and our 7 month old daughter. My wife ended up having to hand food over the ticket barrier so that I could feed Emma, whilst two aggressive guys crowded round her and insisted she travel back to Walthamstow to sort the problem out with staff there, otherwise they would call the police. Needless to say, when we were reunited and returned to Walthamstow, the National Express member of staff there said the problem was nothing to do with him, leaving our family day out ruined and my wife unable to travel.

When we went to the Tube bit of Walthamstow Central, he couldn't have behaved more differently from the thuggery of the men at Liverpool Street.

Seeing that my wife was obviously still distressed, he left the ticket barrier to come to an Oyster machine to check the status of her card with her. He then opened up the closed ticket office so he could fix the issue with the card. He was so helpful, kind and sympathetic, and outraged that the National Rail bit of London's transport had behaved so badly.

On Monday I asked Twitter for suggestions of how I could get a thank you message to Claude. Obviously writing this blog post is one thing, and other people suggested sending letters to the Standard and the local paper, or to the station.

But TFL have made it easier than that. 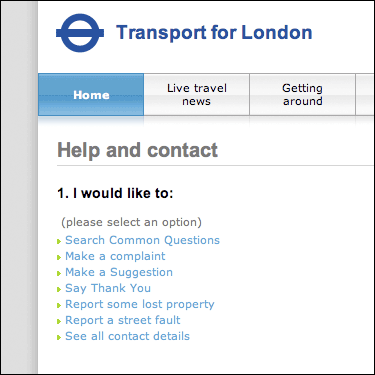 I think it is a lovely service design and user experience touch. It takes no effort to add it into the form, yet it has fulfilled a real user need for me. So thank you Claude, and thank you TFL for letting me send a message through.

As for National Express...obviously I've sent in a complaint about the way my wife was treated, but I don't see how we can get any kind of satisfactory result. As I put it at the end of my letter:

"I'm not interested in an apology. Our family day out was ruined and there is nothing you can do or say to put that right.

But I want to ask a question.

How can your corporate culture have gone so wrong that when faced with a glitch in the Oystercard system, three of your staff would rather bully and intimidate a young mother travelling with a 7 month old baby into tears, instead of trying to help her?"

Do you have the names of the guys at Liverpool Street? As well as giving Claude praise, you should shame the jobsworths who ruined your day (but I bet they hid behind official blank expressions).

I'd just have let them call the police when they threatened to... can't imagine they'd have sided with the staff.

NEXIA are institutionally opposed the Oyster PAYG system, which they appear to feel has been "imposed" on them by Transport for London, which they are not part of, and appear to cooperate with only grudgingly.

I think that due to this private company's management's cold war with the government (they have been threatened with renationalisation) and Mayor's office, staff are deliberately not trained in Oyster issues. Most NEXIA staff refuse to have anything to do with any TFL ticketing problem, Oyster or otherwise.

I have also encountered problems which are symptomatic of this overall grudging to provide a useful service. As an example: when Oyster originally came in, you could only get new annual TFL travel cards on an Oyster. They were not available in any other format. As NEXIA were not part of the Oyster scheme at this time, staff were not issued with readers, and there were not readers at stations. This meant that enforcement staff did not have the equipment to check my (valid) ticket, which I could not have purchased in any other format. So, because the management were not providing the staff with the equipment and training they needed to effectively do their job, I was regularly threatened with a fine.

Don't even get me started on the off-peak ticket lady at my local station, and the abuse she gave my mother for not psychically understanding the London ticketing system.

So let's get this right. Their only procedure, in the case of an card or barrier failure (I assume the former, given you got through yourself Martin), is to tell the passenger to make a return journey to the station they came from?

How much further from Walthamstow would you have had to have come before they realised how stupid that was?

Also - isn't this situation not meant to happen with Oyster? i.e. failure to touch in or out simply costs you the maximum fare of £6.50, which (I hope) you can then appeal, or is waived if there's something wrong with the card. Did they not make any effort to scan or verify it?

The way the Oyster system works, if you don't get a green light when you touch in (I'm assuming whatever problem you had would cause you not to), you shouldn't travel. If you do travel, you'll be treated as if you travelled without a ticket at all and will be treated as a fare dodger at the other end.

I'm not defending this system, but that's the mindset that leads to these incidents. The staff could have issued her with a penalty fare, so their suggestion of travelling back to Walthamstow might be what they consider the lenient option.

I'm not a fan of PAYG. I like the idea, but TfL have adopted a deliberate policy of keeping important details about how it works unpublicised (or even completely secret). The importance of checking that you've actually touched in (without errors) is one of these.

That's dreadful but not altogether unsurprising. I suggest you send a copy of your complaint to your MP who will routinely forward it to the Department for Transport who will reply to your MP within 2 weeks. The letter will be signed by a minister but actual written by people working on either the team looking after the particular frachise or after ticketing issues. One way or another it is likely the issue will be raised with the train company management, though there's no guarantee you'll get to hear about that bit.
You could also write to Passenger Focus who are the official body representing the rights of rail passengers. However, I seem to recall that their remit means that where a particular complaint is concerned, they can only step in on your behalf after you've received a response from the train company that you deem to be unsatisfactory.

yours is not a unique case. this is happening all over the world. in the name of security and crime prevention, these morons are harrasing law abiding citizens. there is no use of complaining about i. they will just say that "we are sorry but you must understand that it is a necessary evil"

I have also completed their feedback form and asked them to commend Claude, giving your web address. Hope that's okay but I think he deserves all the thanks he can get. As for the bullies, let's hope some action is taken against them.

I had a similar experience with Northern rail. I boarded a train with one part of my young persons rail card, the ticket inspector on the train sold me a young persons ticket after I had told him that I was missing one part of my card, he said he trusted me so he'd let me have the discount. I got off the train in Manchester and got man handled by grunts and my rail card confiscated. A few months later I got a letter from debt collectors asking me for the £10 I owed for the fair. I replied with a letter telling them what had happened and got a call telling me they would not be chasing the fee anymore as the rail company was at fault... I still haven't been given my rail card back though.

Witnessed the same scenne in Paris underground last month: a women was intimidated into tears by three RATP agents (still only one was shouting) for not having ticket. But no sign of knight in shiny armor to rescue her...

That is very unfair they sometimes you just have to trust people but it seems that some of these people in authority that it goes to their head.
Try your best to get a thank you message over to Claude i am in a similar line of work and if someone goes out of their way to thank you it can make your day and make you want to do something nice for other people.
Have you thought about sending a thank you card to his work and addressing it to him? It’s not a common name.

I read with interest your blog article about National Express staff at Liverpool Street.

Some friends of my wife had a somewhat similar experience at exactly the same ticket barrier. They had arrived one Sunday morning in June 2008 on the overnight flight from Hong Kong and were trying to get to Chingford. They had bought all zones paper travelcards at Heathrow. The staff at Liverpool Street insisted that they weren’t valid on the Chingford line and made them buy two single tickets. My letter of complaint to National Express mysteriously disappeared. It was only when I telephoned and threatened to report the company for fraud that they did anything about it.

Equally, I would agree that the behaviour of London Underground staff is usually extremely good and that the help you received from Claude well deserved praise.

Sounds similar to an experience I had at Cannon Street yesterday. I've a sneaking feeling NR staff simply don't want anything to do with Oyster.

Agreed with the general high quality of Tube staff too - such a difference in their corporate cultures.

@Numpty Even if you did let them call ... what next?

Sounds similar to an experience I had at Cannon Street yesterday. I've a sneaking feeling NR staff simply don't want anything to do with Oyster.
Agreed with the general high quality of Tube staff too - such a difference in their corporate cultures.