Some services - like water and electricity - you have to deal with when moving houses. Others are optional, and when we moved recently we decided to get Sky Television. Whilst I am loathe to subsidise the wages of Titus Bramble, the fact is that with a young baby in the house, spending nearly all weekend, every weekend down the pub on the grounds that 'this game is really important and we don't have Sky' was simply not going to cut it.

I placed the order for Sky's TV service online on August 20th, and the interface showed one of the pitfalls of supplying jaunty optimistic copy alongside some wen-based tasks. As the page promised me that 'Choosing the first available date will get your new equipment installed in time for a great summer of Sky programmes', the fact that they couldn't provide the service for another 17 working days, which took us into mid-October, did not make me feel very summery. 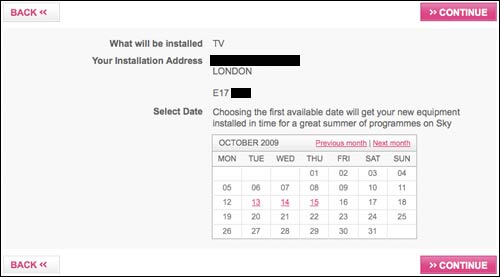 That wasn't the last online user interface woe or service design issue I encountered. When the engineers did come, the installation was a nightmare. The viewing card Sky had sent us wasn't the one intended for us, the engineers hooked the box up to our phone line in such a way that it disconnected our broadband, and they left a huge great hole in our wall having started to drill and then deciding to change tactic and location. 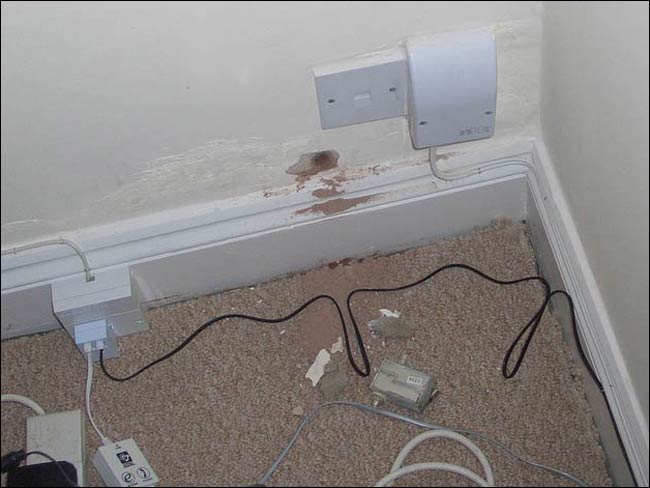 18 minutes on the phone to Sky did little to resolve the situation. After supplying security details by punching numbers into the handset and then giving a machine my postcode and date of birth, once I got to speak to a human I had to resupply all the security credentials. Then, when I couldn't make them understand what the problem was, and was transferred to a supervisor, I had to resupply all the credentials again. The conversation typically went something like this:

I decided to take my complaint online, which is where I endured another very poor user experience. To log in to our Sky account you need a username and a password. The site then asked me to set-up a secret question / answer pairing. Once I moved to the section where I could make a complaint I had to fill in a form which asked for my name, home address, email address, home phone number, another phone number, viewing card number, Sky account number, and tick whether I was an existing subscriber. So, I had to wonder, what was the purpose of logging in? The 'logged in' status did not appear to supply any credentials to the site.

Having filled in all of my details, I selected that I wanted to make a 'complaint' from a drop-down menu, about 'Sky TV' from a second drop-down menu, and then had to classify it as 'other'. I pasted into the form the letter I had written detailing all the issues with the installation, scrolled down and pressed submit.

Nothing appeared to happen.

When I scrolled back up the page in curiosity, I found the following message underneath my lengthy description of the problem - 'Please enter description'. 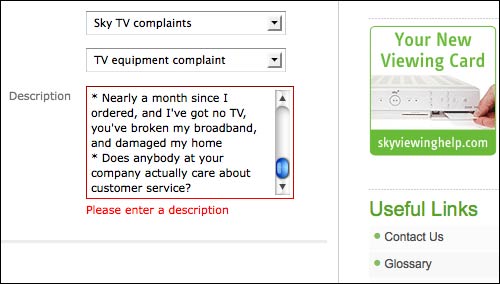 With a bit of trial and error I in fact established that the problem was that the form only accepted a certain number of unspecified characters. There was no indication in the UI about this, and the error message given was nonsensical - having entered 'too much' description requires a very different corrective action from the user than having entered nothing at all.

In the end I had to break the complaint into three separate parts, and submit the form three times. Each time I had to enter the full range of personal information despite being logged in, and I only received one message of confirmation from the system that a message had been delivered. I had no way of knowing whether two of the messages were rejected, or if so, why.

And so it went on. Eventually, after about a week and a half of phone calls and emails, Sky finally activated our box with the viewing card they had sent us, rather than with the mythical other viewing card that they thought we should have. They promised on several occasions that this second viewing card had been posted to us, but funnily enough, we never ever received it. And don't get me started on the fact that we had the wrong regional variations, many channels were missing from our package, we've never been able to set up the remote record function and our remote control died within a few weeks...

After that epic moan - which does have some serious points about user experience in amongst the ranting - in the final part of this series I'll turn my attention to some of the good customer service and user experiences that I received during the course of the move.

Sorry to hear about your bad experiences with the cable company. Here in the states they are just as bad. A year ago or so someone posted a video on YouTube of a Verizon repairmen falling asleep on his couch!

When I moved to my new address sky kept sending bills to the previous tenant. It was a small nuisance but I thought the "nice" thing to do would be to let them know of their error.

"but you send bills to me at the same address, surely by definition your system is wrong"

"??? So even though your system tells you someone else lives here you're still going to send the old tennant mail, knowing full well you will never get a response?"

I think it takes a "special" type of person to work for sky.