In the last few days a couple of products that I've worked on this year at The Guardian have launched - a new design for the Guardian Jobs homepage, and The Guardian's iPhone application.

It isn't that long ago I remember that to actively seek feedback on a new digital product launch meant setting up an email address, trawling through messageboards, processing all the information to arrive at some common themes, and then providing some public visibility of what had been said.

With the drive towards the real-time web, we are now getting almost instantaneous public real-time product feedback, and during the course of yesterday people were able to get in touch directly with the product manager of the Guardian iPhone app via Twitter. 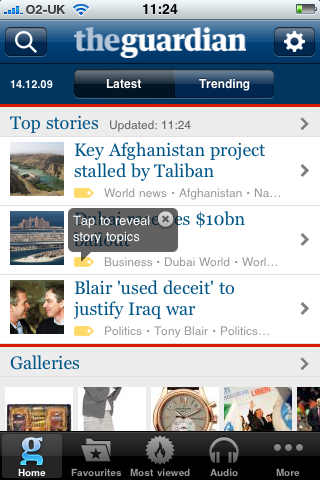 It isn't just Twitter - other microblogging and status update services are available - but Twitter is a big part of it. iPhone users love their iPhones. And Guardian loyalists love The Guardian. And lots of Guardian staff are on Twitter. So putting the three together was always going to be a recipe for volume. More than one person was vexed by the level of #guardianapp noise on Twitter, but I don't think that can be helped.

When you have people like @johnhenry and @moorej who did the bulk of designing and delivering the app for The Guardian on there, alongside people like myself who had a much smaller role in the project, plus the people who commission and drive the development of The Guardian's digital services, and any number of digitally minded guardian.co.uk writers, then there is obviously going to be a lot of tweeting. There is no centrally imposed social media quota system at The Guardian.

There was quite a bit of immediate feedback on the "paid for" business model part of the app, whether it was people saying they'd probably never buy the paper again, were happy to sacrifice a latte for it, thought the app would eventually move to a subscription model, or couldn't see the point when they could free news apps elsewhere.

As Emily Bell pointed out, there was something delightfully ironic about seeing The Guardian at the head of the "paid for" news apps on iTunes, whilst Sky News topped the free apps. Chris Thorpe, who works at The Guardian but hadn't worked on the app, suggested it was the start of a move towards paying for utility, not paying for content.

"At a very basic level the utility the app provides is that you can just get the news and read it on the tube on a small portable device but in my view the it goes a bit deeper than that."

What I'm most pleased with is that we ran our own user testing sessions at Kings Place during the development process, and, recognising that the UX was the key to a successful app on this platform, really took a lot of time getting the detail and nuance of the user experience and design right.

As @ngscheurich put it on Twitter: "The Guardian's brilliant iPhone app has officially set the bar for mobile news". 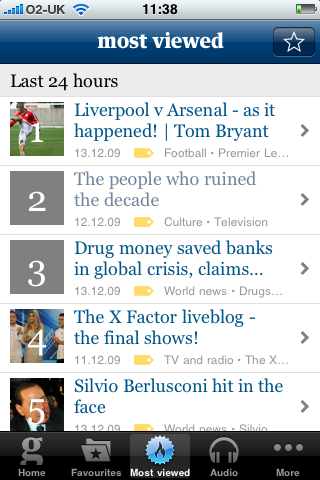 The iPhone is truly amazing. I have been bummed to the core for the past 2 years, because the company I work for, who also supplies it's employees with company phones, is on the Verizon network. I feel like I'm in an AT&T commercial. I'm just about ready shell out the cash for the iPhone. I would definitely add the Guardian app.

Chad, I think being "bummed to the core" has a slightly different meaning this side of the Atlantic!

Will be interesting to see how the market model develops. Def of the opinion that probably won't buy the folding stuff again, but interested to see how the "paid for" versus "the free" apps market will develop and how that will impact content. "Bummed to the core" comment, very funny, maybe a Freudian slip!

Wow, this is an amazing step forward for news. I was already surprised when I saw that GQ Magazine was offering up their content for $2.99 on the App store. It's such a great idea to save the old style content industry.

I really feel Apple's next move with their tablet is going to revolve around magazine distribution and books. It could be a serious competitor for the kindle. I think all the news, book and magazine apps we're seeing is a foreshadowing of things to come with the tablet.

I'm looking forward to getting my hands on some apps of the being built for Google's Nexus One phone. A number of UK newspapers are building andriod applications that will work on the Google Nexus One.