"My first term" - a seventies pull-out in a noughties local paper?

I'm the kind of person who still buys a local paper, and this week in the Waltham Forest Guardian I noticed a feature I found distinctly odd. "My First Term" is an 8 page pull-out compiling school classroom pictures from a variety of nearby local authorities. The geographical range covered is quite wide, including Walthamstow, Woodford Green, Loughton and Waltham Abbey.

Initially, I couldn't help but be surprised that, in these days of media paedosteria, the paper was trying to sell extra copies on the premise that you could buy lots of pictures of other people's children. 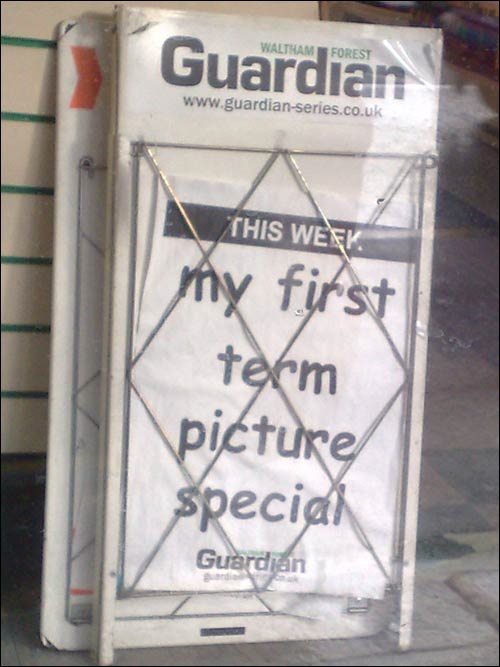 And I really couldn't fathom how the business case might work in 2009.

It seemed to me that a pull-out like that might have generated revenue in several different ways, giving the paper the ability to:

All those seem to me to have been perfectly reasonable at some point, but I wondered about the viability today. The supplement would have cost money to produce, whether it was sourcing the images, to getting rights clearance (and I'm very interested in the extent to which parents consented to wider publication of the images) to publishing the extra pages. There were only 8 small panels of advertising included in the supplement though, and I'm personally unconvinced about any uplift effect on sales. 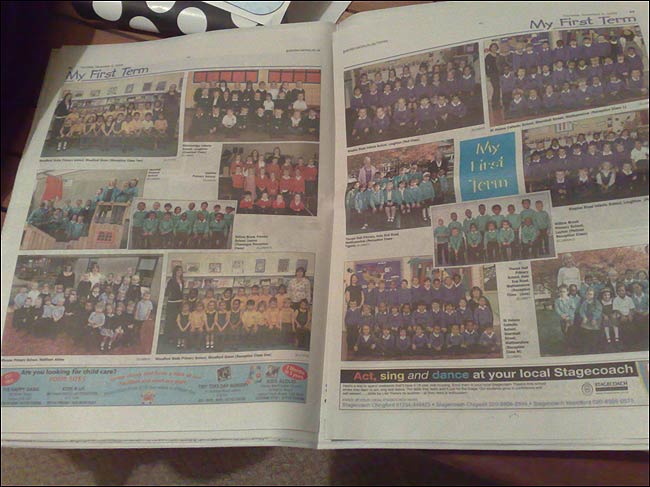 The proliferation of mobile phones with cameras, and digital imaging technology in general, means that we are long way away from the days when few parents could afford to distribute lots of pictures of their family. The formal school photograph still has a place of course, but in the context of people uploading tons and tons of content to the web every second, it is a very different proposition to the photographs that I posed for.

I was at an SLA Europe event last week where I saw Andrew Hughes of the NLA say he was fed up of armchair pundits and aggregators telling newspapers how to run their businesses when they don't have access to the full financial picture of the companies involved.

So I'm not going to do that.

What I will say, though, is that we know that if you were setting up a local news business from scratch in 2009, there are lots of things you would do differently to the structures that exist today. I'm not sure that souvenir school photo pull-outs are the first thing I'd think off as either a public service offering or a money-spinner.

Feels like a play on the brand equity of the paper itself to me - selling parents something they've gotta believe: "Look! My child is special important, she's in the paper!"

It's wrong of these newspapers to publish school children like this. In the world of today it's definitely not something that I would personally endorse.

I don't know that it is wrong per se, David. Providing the parents signed consent forms that said the picture would be published more widely, I don't have a problem with that. What I don't fully understand is where it is providing value to the paper, either financially or in terms of the brand.

I generally don't buy newspapers at all. I have only ever bought the local paper 3 times in the 9 years we have lived in the area. But when my eldest son's first class photo was in the paper I bought it. I don't remember being offered a copy of this photo by the school, and I thought my son would like to have it when he grows up.

Andrew, It's just a keepsake, every child in the school area is in it, so I don't think it's playing into any misconceptions about a particular child being 'special'. I think that does exist in this bizarre celebrity obsessed culture, but I don't think it's a factor here for most parents.

David, I think to suggest it's wrong to publish children's photos at all is just buying into the Newspaper driven frenzy suggesting a paedophile is on every corner waiting to grab our children. Yes, it happens, and yes we should be vigilant, but when children are hurt the perpetrator is usually a neighbour, a relative, a friend, a trusted adult, rarely a complete stranger.

So, I don't know how much the circulation of a paper goes up but it is certainly the only reason I bought it. Maybe it is just a selling point to their advertisers, although I couldn't comment on how many more advertisers they had on that issue compared to others.

On the brand, I would think that for a local paper, it would be about keeping a connection to the community. As national newspaper sales decline, I think it's possible that local papers may survive longer because of that connection. It would be interesting to see what the figures are on that.

Sorry for such a long post - just got me thinking

It's just a keepsake, every child in the school area is in it, so I don't think it's playing into any misconceptions about a particular child being 'special'. I think that does exist in this bizarre celebrity obsessed culture, but I don't think it's a factor here for most parents.

Yeah, I overstated my case there - I was aiming for something much more subtle.

All kids are special, obviously! Especially to their family. What I was meaning is that local papers still have a position where they seem more trusted and more solemn than printing out photos from a website would; it's more of a big deal, and raising kids is a huge deal, so there's some degree of psychological reinforcement there which local papers can get leverage from.

Appreciate the last part of the post stating that newspapers should be left to newspaper people. Surely the publisher knows what it is doing.

However, to add my opinion, there may be that nostalgic feel for one's (or in this case family) picture in the paper. I could see this only being enhanced by the digital age, when a photo is placed in a periodical it is legitimacy. In digital format a photo is pedestrian.

Martin, it wouldn't have occurred to me to question the traditional first class supplement until I read this, partly because not unusual. All the papers in my region have done one this year and the ones I know of elsewhere that DON'T do first class do a nativity supplement instead.

As a rule the school doesn't provide the pictures - newspapers take them, and so if a parent wants one, they have to buy it from the paper.

And everywhere I've worked, sales of the paper were always up on the day the supplement is published, and the parents always buy a lot of pictures.

I don't know the figures either - and there's maybe a case that it's too labour intensive for the return - but we don't have enough staff to waste our time with it if we didn't get something out of it.

I also think it's a function of a community newspaper that's worth keeping.

We know parents appreciate it because of the number of calls we get if the supplement is late appearing, or a school gets missed out.

It's a service they expect from us as their local newspaper. How long that will last, who knows.

(in terms of the consent issue, by the way, these days parents are usually told when the photographer is coming, that the photo will be printed and available to buy online, and if they don't want their children in the picture, they don't have to be.)