Comments are free...to inform and to entertain, as well as infuriate

"As a blogger I'm not afraid of the comment box, unlike many journalists of whom we shall not speak..." - Zoe Margolis

The 'outing' of Belle de Jour, like that of Night Jack and Girl With a One Track Mind before it, has raised some interesting debates around the issues of anonymity and privacy when blogging. Zoe Margolis, the one-track minded sex blogger, wrote a piece for The Guardian on the issue, and immediately set about playing a very active and aggressive role in the comments thread below it.

I linked to it on Twitter, suggesting she was very much giving as good as she was getting. Not everybody felt the same. Anne Wollenberg said in reponse.

"Totally disagree. Think she needs to stop rising to it. Readers on the Guardian site will always hack people to shreds and responding to every criticism = red rag."

What interested me here was that I think it illustrates something about the respective culture of 'blogger' versus 'journalist who has comments enabled at the bottom of their articles'. There is one view that says adding comments to the foot of every newspaper article online is just an opportunity for 'green ink' letter writers to scribble all over your work in public. "I can't believe you get paid to write this rubbish" never seems to be too far away in any newspaper comment thread.

You seldom see a journalist come out fighting their corner in a comment thread like Zoe does here. And rightly so. For one thing they don't have the time, and for another, it would be a distraction from having an impartial authorial voice when needed. However, on a contributor's guest comment piece it struck me as a really entertaining read - and surely the point of UGC is not just to let people 'have their say', but also to entertain and make the overall web offering more compelling for everybody? [see comments for clarification]

There is another interaction role in the comments on The Guardian though, and that is to be useful and helpful. We recently changed the back-end implementation of the system, and Meg Pickard, our head of social media development, used a blog post and comment thread to collect bugs.

One of our developers, Roberto Tyley, also blogged about the changes on the site. 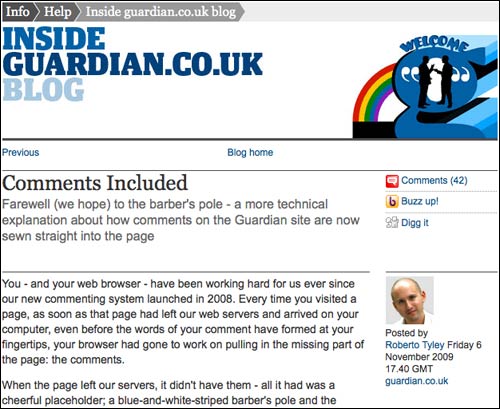 He outlined very clearly the reasons that the system had been implemented in this way, and was open and candid about some of the technical issues the team had encountered. Like Zoe, Roberto also got stuck into the comments thread. Not, in this case, to defend a position, but to help people with the questions they had about the system, and to discuss things like 'cache-invalidation message failure' which had been causing some bugs in the first couple of days. I think it is one of the best examples of a tech team engaging with the audience over changes to a site that I've seen.

Implementing comments on newspaper sites has always been viewed as risky. It opens editorial content to instant and public criticism, may alienate advertisers, and moderating user-generated content is time-consuming and expensive for an industry that is concerned about future financial viability. However, I think examples like the two above show how the potential value of the entertainment and audience dialogue they generate make it well worth taking those risks.

Read other recent posts about: Media, Newspapers, The Guardian, Web

"You seldom see a journalist come out fighting their corner in a comment thread like Zoe does here. And rightly so. For one thing they don't have the time, and for another, it would be a distraction from having an impartial authorial voice when needed."

Sorry, Martin, but I think you're wrong on this. Journalists should get involved in the comments on their articles much more often to address criticism, clarify their points, discuss contrary evidence, etc. It is not a distraction from impartiality, but an opportunity to discuss the facts of the matter with readers.

Having the writers of a piece be involved in the conversation it spawns also helps to keep that conversation more civil. You'll note that Zoe's comments do result in a number of people being very civil and supportive - something I doubt would have happened if she had not shown up to participate.

Too often, journalists and columnists act like they are just chucking a handgrenade into a crowded pub when writing for sites that have comments - their aim is to provoke reaction and create dissent which they can then either watch from afar or ignore totally. They want to create conflict, because it means more page views as commenters continue to reload and re-comment over and again. That is incredibly poor behaviour, and if they actually had to take part in the comments perhaps they might consider taking a less provocative line.

Good points Suw, and you are quite right - I think it is great when journalists engage in comment threads, and there are plenty examples of journalists who do just that, and do it very well. On The Guardian site both Marina Hyde and Barry Glendenning are really good at engaging with the users on the sports section. By 'aggressive' though I didn't so much mean Zoe's tone - she is certainly very humourous in the thread at times - as the volume of comments she leaves. When the page loads almost a quarter of the comments are from her. That is pretty unusual, and I'd suggest, would be unsustainable for most journos with the current production pressures.

comments are by far the most popular tool in the hands of the website owners that allow them to see and use the public opinion. While on a select few sections of the sites comments are not always welcome many sites are now using the commenting system to build up a good and loyal customer base for their sites in particular.

I believe journalists can be pompous and talk down to us regular folk, but there are a few kind journalistic souls who take their blog comments on the chin with dignity and respect so Kudos to them.

Enjoyed the article and really appreciate journalists that are nice even though they probably have a hard time listening to all the comments of people.

"Literary incest". Now does that not put an end to all discussion on the matter !

Brilliant ! Wish I had thought that one up !

Doesn't criticise the actual article, but questions the wisdom of journalists, commentators, bloggers etc. entering into any form of interaction with readers.

I think even Zoe herself has acknowledged the overwhelming significance of this simple but devastating 'comment' on her right of response to 'commenters'.

I guess journalist are trained to be objective and highly critical with people on a whole. It has become their second nature to have common judgements of others.

@Suw has described this post as 'uncharacteristically harsh', and @girlonetrack tweeted: "I didn't realise my responding to commenters on my Guardian piece would be so controversial". I obviously didn't convey what I intended to with this post at all. It was a very rare occasion when I decided what I was going to write about on the tube on the way into work, and hammered it out in the cafe to post straight away. The bullet points I had in my head when I sat down to write were:

* Zoe responds to the comments on CiF like a blogger would on their own blog
* It is great, fun and entertaining to read.
* You seldom see journalists wade into a comment thread with a volume of response anything like that - 25% of the first 50 comments are replies from Zoe
* If all journalists did that though it might drain scarce newsroom resources
* Some people still think comments on articles just encourage 'green ink' in public. They are wrong. Comments can be entertaining and useful and add value to a news site user experience.
* Roberto's blog post and comment thread contributions about server-side Pluck were cool and I haven't had a chance to mention that on currybet yet so I'm going to shoehorn that into this post

Somehow, between the bullet points and pressing publish, I seem to have mangled it into saying "I hate journalists. I hate bloggers. I hate comments. I hate people who leave comments. I hate anyone who is going to leave a comment on my comment about comments. Roberto's thing was still pretty cool though".

I think I'll have to put it down to too much caffeine and not enough sleep...

Thanks for the update and clarifying things. I didn't interpret this post as that harsh, so don't worry!

When I mentioned my responses on the CiF site as being seen as "controversial", I wasn't solely referring to this post: many people commented about it on CiF itself, as well as dozens tweeting and emailing me to say "well done for tackling it head on". I suppose that is what strikes me as odd, not the fact that I answered back.

Saying that, though, yes, I was very vocal 'below the line' on the piece I wrote, and this was partly because - within MINUTES of it going live on the site - I felt people were attacking me. I wanted to limit the impact their negative comments had, as well as clarify (as you have done here) why I wrote the piece. So I decided to dedicate a little time to responding to the more aggressive comments (alongside working on the copyedits of my book: thankfully I don't work in a newsroom, so I can work flexi-time).

Because I began my writing career as a blogger, responding to comments underneath a post is normal for me: I've spent almost six years doing so in my own comment box. So naturally, when I write something as a journalist - whether it's for a newspaper's print edition or online - if there's a comment box underneath it, I'll always make the point of interacting there. To my mind, blogs and blogging are about conversations, not just opinion.

Maybe this is where I differ from other, more traditional journalists, and yes, it was those I was having a dig at. The Internet has meant the broadcast and press medium has moved on into a more interactive sphere, whether old-school hacks like it or not; newsroom time-commitments aside, I do think this needs to be embraced, rather than looked down upon by them.

Right, back to my book!

Every article should have a comment thread. This would force journalists to own up to what they write. Many times you will see biased commentary mixed in with reporting or a misrepresentation of facts. This allows the consumer to keep the media in check.