"Breakfast with the Voicebot"

On Tuesday morning I visited Sidekick Studios near London Bridge to have 'Breakfast with the Voicebot'. 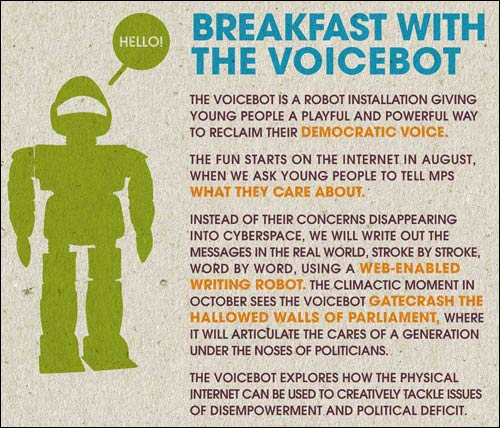 The robot looked somewhat less human than the illustration on the invite. To be honest, it didn't look like it was capable of wrenching itself free from its base and going on a strangling and mangling rampage, which I always find slightly disappointing when I've been promised a robot. 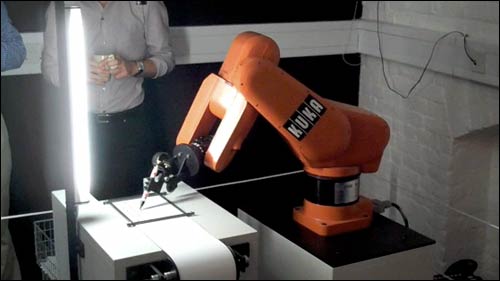 It is the type of machine usually used on car production lines to perform menial tasks like tightening screws, but this one has been programmed to write. It receives messages via the internet, and then delicately writes them out with a felt-tip pen onto a card, which it then cuts. 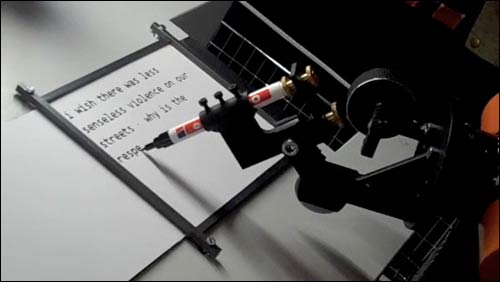 The idea is to get young people in touch with politicians. Sidekick Studios have built the robot for V, the national youth volunteering organization, and it will be moved to Westminster as an installation for politicians to see the messages that have been sent in. Before the people at the demo got hold of it and started making it write silly things, the serious issues young people were concerned with included the war in Afghanistan, knife crime, and body image. All of the data is available on the Voicebox website. 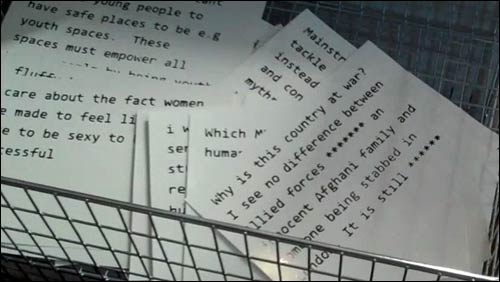 You can watch the robot in action in this video clip I made whilst I was there.

"Breakfast with the Voicebot" from Martin Belam on Vimeo.

Read other recent posts about: Children and Teenagers, Events, Politics

hey man, thanks for sharing this. and thanks for popping by. i like your video. we're going to put it up on the blog. it's saved me having to go buy a camera to shoot a similar film. if you're interested in the politics of it, we wrote a little blog post on it, would love to know what you think.

Seems like an overly elaborate gimmick to utilize a robot. Would not a printer suffice just the same?

Chuck Sinclair,
I am sure it will not be the same - of course a printer can print words and phrases, but the idea of a writing robot attracts the audience, and makes the idea more popular.

Martin, At first glance I was rather disappointed too! Surely theres a trade description issue here lol? The robot looks nothing like the advertising that goes along with it... and yes indeed looks like it was plucked from the local car production line! Something more space age I think would have been much more elegant!

At first I did wonder how such a thing will make any political impression since surely a printer would achieve the same... but as Paul comments its more about the fact that its something different which maybe will attract attention. I hope those in power will take note of voice it represents.