No SOS needed for newspaper RSS

Last week Malcolm Coles wrote a blog post entitled 'Newspapers: turn off your RSS feeds'. It was a provocative title, and it certainly gained a lot of attention. Whilst Malcolm was right to point out that subscriber numbers to many national newspaper RSS feeds are low, his interpretation that this made them worthless was wholly wrong.

At the time, Malcolm, myself, Ian Douglas from The Telegraph and Charles Arthur from The Guardian had a debate about newspaper RSS feeds on Twitter - although I think all that we managed to prove was that Twitter is a bad medium for a 4-way conversation.

After enduring a torrid time in the comments here, here and here, Malcolm has since recanted.

I did still particularly want to pick up on one point Malcolm made about The Guardian's range of RSS feeds:

"[W]hile the Guardian has a couple of RSS feeds with decent numbers (partly because Google recommends it in its news bundle), it has more feeds than there are people in the UK..."

Our feeds are simply generated as a function of publishing. If you take any 'front' like Sport or keyword page like Roger Federer on The Guardian site, and add /rss to the end of it - you will get the contents in RSS format. 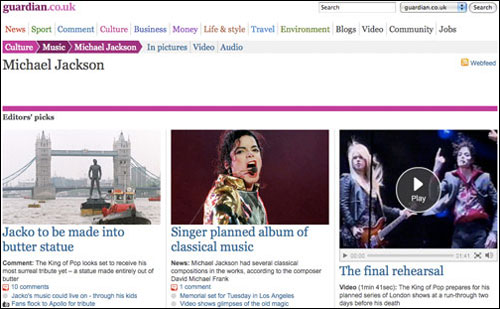 Thus http://www.guardian.co.uk/music/michaeljackson will give you all the content on the site tagged 'Michael Jackson', and http://www.guardian.co.uk/music/michaeljackson/rss will give you that content in a machine readable way. As far as I can tell there are only 4 subscribers to that particular feed in Google Reader - but that isn't really the point.

The point is that as a publishing platform all these feeds come for free, but only when they are requested. Nobody at The Guardian sat up all night specifying a zillion different RSS feeds, and the R2 platform is only pumping out the ones that people actually request.

On The Guardian site you can also build 'combiner' URLs, that slice the content by keyword and content-type. http://www.guardian.co.uk/music/michaeljackson+content/video will give you all of the video content on the site about Michael Jackson. Again, /rss added that to URL instantly makes it machine readable. Now, what that means is that there is an almost infinite number of ways to combine The Guardian's tags, to make pages or RSS feeds that are rendered on demand.

Direct consumer subscriber numbers might be low, but making content available in a machine readable format is all about being part of the platform of the web, rather than just being in browsers.

Plus, the average keyword page on The Guardian site renders at over something like 3.8m pixels. The webfeed logo takes up 910 of those. It seems churlish to suggest that is taking up too much real estate.

Now, there aren't many things you can do on in the digital media space as a news organisation where you aren't competing with the BBC. Video? The BBC does that. News-based podcasts? The BBC is in that space. Mobile phone site? The BBC is in that area too - and running advertising campaigns for their service on their rival's platforms. Compilation of funny clips from YouTube? The BBC even does that these days.

RSS is one area though, where the UK's commercial news operators can chose between offering 'full fat' and 'skinny' feeds, in the knowledge that providing 'full fat' means they are doing something where they have a distinctive offering over and above what the BBC provides. Of course, on the downside, full text feeds makes it easier for people to scrape content, but it also makes for a more attractive feed for application developers, a more satisfying experience in a feed reader, and it gives advertising engines more context to serve adverts.

So, speaking personally, at the moment I'm more than happy for the BBC to only offer a cut-down and unsatisfactory headlines and snippet service over RSS, leaving at least one new media field open for other news organisations to experiment and innovate.

When you said you had 'Coles RSS' on your to-do list (as opposed to, say, the friendlier-sounding 'Malcolm RSS' on there), I thought you were going to be ruder than this...!

Anyway, the only point I'm going to make is that I do think the Guardian's RSS platform is amazing, as I originally said. But you don't exactly promote it. I'm subscribed to the Inside guardian RSS feed (ahem) and I've seen it mentioned there, but nowhere else ... Maybe I missed it.

910 pixels to explain something that allows you to subscribe to exactly the content you want doesn't sound very many - and while the webfeeds logo is on the 'index' / keyword pages, it's NOT on individual stories.

Couldn't you add a box about it under the keyword links in the middle column? Or with the share / print icons at the end of each story? Or possibly in that big white space under the 'Digg it' button?

I thought you were going to be ruder than this...!

The weekend interlude and the fact that you published a post changing your mind mellowed me. When I wrote 'Coles RSS' on my to do list, only the fact that I was in the middle of Activate 09 spared you an instant savaging ;-)

"Compilation of funny clips from YouTube? The BBC even does that these days."

I feel that the BCC could better spend their money elsewhere then working on funny youtube videos. Leave that to the amateurs who have unique footage.