Now, I haven't complained on currybetdotnet about the Royal Mail since August 2004, but in the last couple of weeks they have produced a couple of absolute corkers.

The other Thursday we got a bill. Somebody else's bill. Sent to an entirely different address.

OK, to be fair, it was to the same house number, but on a different street.

But the real added bonus?

The free gift of some used chewing gum stuck to it. 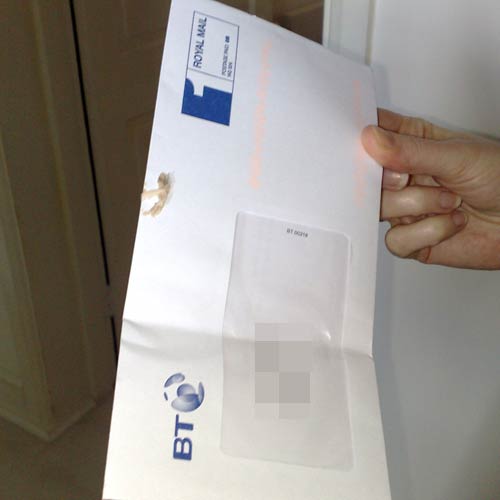 And yet they say that their business is in trouble?

To ape 'Look Around You', "Thanks Royal Mail, #thail".

And then they went one step better...

Yesterday I was expecting some important documents which had been sent recorded delivery. You know that service, where they track your letter with a barcode and you have to sign for it on delivery?

It was just shoved through the door - no signature required, even though I was in. 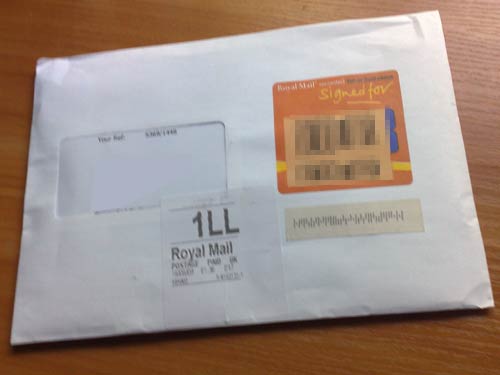 So I was wondering, armed with the barcode number, do you think I should phone them up and see if they can work out what they've actually done with this letter I haven't signed for? Their online tracking system just tells me that there is 'a problem' with my reference number. You bet there is.

Complain and they'll send you six stamps in compensation...

Claim the package as not received (well, technically, it wasn't received as a Signed For item as there was no signature taken...). Figure out how much it'll cost the sender to compose the documents (i.e. their material value) and make a claim.

I've had a Recorded Delivery item received myself that they didn't bother getting a signature from. And they charge a premium for it as well!

Quite often we don't get any post of Tuesdays. More seems to come on Wednesday to compensate.

@Andrew: ah, but are they for small or large letters - and how do you tell? (seemed to take them ages to realise the stamps would need to be labelled in some way.)

In fairness to Royal Mail, I have found when sending mail the Online Postage facility is excellent - although it seems few are using it. Its nice that although you *can* prepay, you don't have to, and they will process a single 30p transaction without charging you extra (curiously, that's with a credit card, the minimum debit card transaction is £2.50 - surely taking into account fees etc. it should be the other way around. Also I was under the impression that for some time you could only use debit cards in post offices..) Also, its very easy to claim a refund - which you can if you decide not to send the item, for example. On the downside, they are hopeless at answering customer support questions by email - and you're paying for your own labels + printing.

Finally, if anyone is considering the 'Door to Door Opt Outs' then I'd suggest you'll find it a waste of time. The signup process is cumbersome (you write to them, then they send a letter back, which you have to sign) and you have to renew it after two years (Royal Mail will not remind you.)

It takes up to 6 weeks to activate (not great for a company providing a delivery service) and when it was, my postman mostly chose to ignore it - if anything, I started to get paranoid he was putting more leaflets through out of spite. One day another postman came with a parcel and was about to hand me something and then said, 'ah, you'd don't get that do you' and put it back, so clearly there was *some* sort of list.

My suspicions were confirmed a few weeks later when the regular postman accidentally posted the Door to Door 'card' through the letterbox (which is supposed to be inserted in the correct place in the pile of letters as a reminder the householder has opted out.)

Contrast that with the fact that whenever I buy anything from the Apple store, an *incredibly* friendly UPS courier turns up (in a proper brown van and everything). Admittedly its always the same guy, I don't know if all their staff are like that.

(is that enough for you?)

I had our postie drop through a signed for package the other day. I'm really glad I paid the extra to get signed for!

William T - I got the stamps before they introduced the large parcel prices so I don't know!

I actually complained about the fact my postman had left £100 worth of Amazon purchases on my doorstep. As it happens I live in an area of London where you can actually leave things on the doorstep without someone pilfering it but even so...

What i got back was a bog pretty standard, multi purpose "Sorry, here's some stamps as compensation" letter so I presume they send stamps to anyone who complains!

They never ask for a signature here so I always tell people that it is a waste of time using the recorded delivery option. Deliveries in general are a joke. Normal deliveries can arrive any time between 1 pm and 4.30 pm. If our regular postie is on holiday or off sick, then we might get a delivery every other day. And the "temp" often dumps the rest of our terrace's post in our or next door's letter box because they can't be bothered to do the remaining 6 houses. We once came back from a 3 week holiday in India to find everyone's BT phone bills on the door mat plus all the red reminders!

If a signature is not obtained, the sender is entitled to a refund of the recorded delivery fee (around 80 pence).

Personally I am happy if my postman posts a recorded letter through my letterbox as it makes life a lot easier.