MPs expenses, The Telegraph, The Guardian, and the 'open' and 'closed' models of 21st century journalism

The MPs expenses scandal has been the defining political story of the year, and with the final publication of the information by the House Of Commons we can now see another potentially defining battle emerge for the future of news - that between the cheque book, bunker and 'traditional' journalism, and an alternative path of open crowd-sourced data-driven journalism.

I want to start by saying hats off to The Telegraph. I think what they have achieved with their coverage of MPs expenses has been absolutely phenomenal, and unlike anything else I can remember in my lifetime. They have led the news agenda for a couple of months, put on sales, piled on extra electronic users, and have had the established political order on the run. Indeed, you could argue that The Telegraph aided UKIP and the BNP to their European Election success, although, personally, I think the Labour Government had been doing a good enough job of imploding on their own anyway.

Yet as I said at MTM London's "Do online newspapers have a future in a Digital Britain" event, there was something I found a bit unsavoury about the way the paper tackled the data, that smacked not of transparency and accountability, but of good old-fashioned patronage. 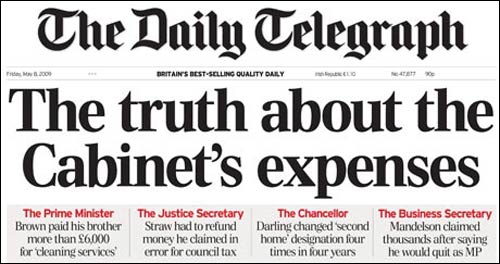 Of course it was right for the Telegraph to concentrate their fire first on the Government of the day, but by the time they turned their attention to the Conservatives, the divorce of Peter Andre and Katie Price had effectively removed direct reporting of the scandal from the front pages of the most popular papers in the UK.

Now, unfortunately, as has been pointed out to me, this rather sounds like I'm in agreement with maverick MP Nadine Dorries, which I can't imagine is a comfortable position for anyone.

However, the point I was making at the event was that whilst this professional and diligent exposure of the data was telling, and needed the amplified voice of the mainstream media to gain traction, releasing the data into the open is also a powerful tool. It was The Guardian that assembled a spreadsheet from the data published by The Telegraph, which allowed third party hacks like Tony Hirst's maps and charts. 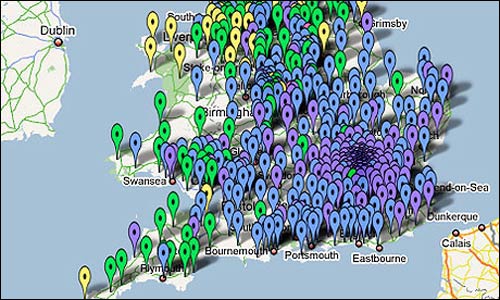 And there was, I believe, a further significant moment this week.

The Government released the MP expenses files in difficult to parse hand-scanned PDF format, and there are hundreds of thousands of pages to wade through. Within hours, The Guardian had launched a crowd-sourcing application, inviting users to help collaborate with journalists in sifting through this massive pile of information. 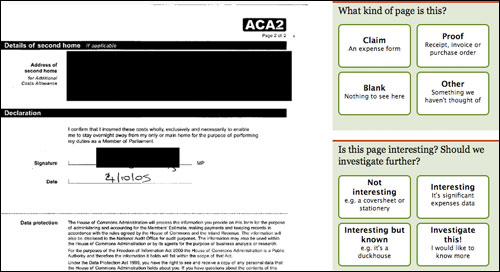 The application allows users to point out whether an individual page from the PDFs is interesting and worth further scrutiny, and to transcribe the line item figures on the page in a glorified version of the reCAPTCHA project.

I think the Telegraph's bunkered attitude to their scoop, and their insistence that they alone determined what was 'in the public interest' from the documents is a marked contrast to the approach taken by The Guardian. The Telegraph are physically publishing a selection of their data on Saturday, but there is, as yet, no sign of it being made online in machine readable format. [1]

Both are news organisations passionately committed to what they do, and both have a strategy that they believe will deliver their digital future. As I say, I have a massive admiration for the scoop that The Telegraph pulled off, and I'm a strong believer in media plurality. As we endlessly debate 'the future of news™' I think both approaches have a role to play in our media landscape. I don't expect this to be the last time we end up debating the pros and cons of the 'closed' and 'open' approaches to data driven journalism

Please note, this is a personal blog. The views expressed on currybetdotnet are my own, and do not reflect the views of Guardian News and Media Limited, or any current or former employers or clients.

Read other recent posts about: Daily Telegraph, Media, Politics, Post of the moment, The Guardian, Web

The logical follow-on from your excellent piece, Martin, is the two different approaches impact on the monetisation of this journalism.

The Telegraph's bonus is in a short term boost to readership; The Guardian's rests in the longer-term value added to its brand by interacting with the larger web community. It's easy to see how the former translates so readily into cash in hand; it's harder to appreciate the latter in financial terms - but that doesn't make it less credible.

Had the Telegraph been as clever with the data online as the Guardian in the first place, or if the Guardian had been the ones who got hold of the data first, this "defining political story of the year" could have turned into a defining moment for how the old and new worlds of journalism can truly work in harmony.

I think you and Hodgers are right. I asked (via twitter) when we would get the spreadsheet online. Not that I expected a reply but it did seem an obvious thing to do. Even if they published it at the same time as the special suppliment.

I don't think that we should underestimate the 'value' of the kind of thing the Guardian is doing. Part of the problem for many print orgs is that they were late to the game and missed the chance to build brand in the medium that could reinforce failing revenue.

The telegraph had a cast iron opportunity to leap forward, reclaim some ground and they blew it.

I think you're missing the fundamental difference in source material. No publisher would have released the completely unredacted scans for crowdsourced investigation, there was far too much on there that could never be considered as being in the public interest and could be damaging to private individuals (contact details of people who work for the MPs, for example, or suppliers). The Guardian, good as their project is, is working solely with government-approved information.

Perhaps you'll change your mind when you see the cabinet expenses in full on the Telegraph website today, and other resources to come.

I agree with Ian, there is no chance that had the Guardian had the full material from the start that they would have released the information in the way they have now. The opportunity to steer the news agenda for a month would have outweighed any other thoughts.

What has also become clear, is how much work has gone into deciphering, interpreting, researching and checking before publishing by the Telegraph team. Hats off to them.

Finally, why do you assume it's "25 middle class white guys in suits" rather presumptuous and disingenuous I think.

Yes Ian, and as I say, I genuinely think you've done a brilliant job with this story. I'm looking forward to the supplement and I've got no doubt you will also do some great stuff online with it as well. I think what strikes me is that what The Telegraph has done is great, and what The Guardian would have done would also have been great, but also probably different. I think that is down to cultural differences in the organisations and the way we are both pursuing different approaches to digital. For me the nearest recent equivalent would have been The Guardian's Tax Gap series, something where the website published enough of the damning whistle-blowing source material to get judges up in the middle of the night.

Always good to be called 'disingenuous' by someone who signs themselves as 'Gordon Brown' when it doesn't match their email address ;-)

The figure of 25 journalists working on the story has been widely reported elsewhere - I'm sure at times it was higher and at other times it was less. As for the demographic make-up of them, well, I don't know for sure, but if you extrapolate the class and gender of the majority of business, political and financial journalists in the UK, I reckon my error for margin is quite small.

What about the cost of these files? No newspaper could spend perhaps £100,000 on documents just to put them into the public domain.

This was an investment, one that I understand other papers turned down.

That the Guardian are crowd sourcing the redacted expenses is great, but that is information which is already in the public domain. If they had paid for it they would do their best to get a return on their investment, naturally, which would probably mean bunker journalism, perhaps with a few more of the Guardian's fantastic digital bells and whistles.

Just to clarify, especially after being name checked by journalism.co.uk in this!

When I said I didn't excpect a reply I didn't mean that I was expecting to be ignored. I wasn't. There is no reason they needed to give me one. Ian deserved the lie down in a dark room.

In terms of the revelations - I'm sure there is more to come and as good as we are promised. But I agree with Martin that there may be a way to bridge the gaps between the print reveals.

It is interesting the way in which open collaboration with the public can serve to work against the forces of patronage and bias. It is even more interesting to note that forms of citizen journalism (blogs and the like) are generally accused (and often rightly so) of being themselves biased and susceptible to political influence. Seems balance is the rule here. There are some great interviews with both traditional and citizen journalists about these, and other, issues effecting the future of journalism here.

I should add to this that The Telegraph has now made available a searchable database of MPs expenses information - a very good little application by the looks of it.