A Google-eye view of the European Elections

A lot of people do their primary research these days using Google as their only gateway to the Internet, and I wondered what they would be finding if they were looking for information on the parties standing for Thursday's European Elections in London.

All of the mainstream party listings in Google are pretty similar. The initial homepage metadata in all cases stresses the name of the party leader. Who says personality politics is dead? 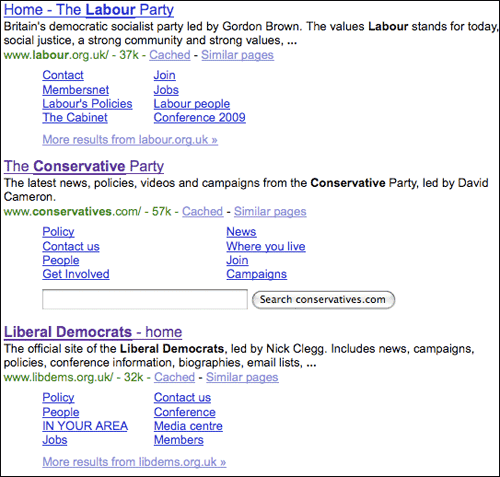 The second listing from Google in all cases for the mainstream parties is a 'policy' page, outlining the party's platform. There are varied degrees of success here. The Google snippet from Labour is pushing a specific policy, whereas for the Liberal Democrats it is mostly pushing the fact that they are using Amazon for hosting.

Few of the party webmasters seem to have thought of using their metadata space to specifically address the European Election. Not so the Green Party, who have changed their title tag to the slogan 'Vote Green Party on June 4', buying themselves some free online campaigning.

Likewise The Jury Team have a site description that seems to have been changing, giving news in the lead-up to the June 4th vote.

"With just days to go, the Jury Team's fifty-nine candidates are all completing their campaigns in Euro constituencies across the country..."

UKIP and the BNP

Google's algorithm specialises in picking out the most important pages on a website. For the mainstream parties the second listing was given over to a page dedicated to the party's policies. For the BNP, however, Google's second listing concentrates on a page from their site asking "Is the BNP racist?"

UKIP, as I mentioned before in my brief guide to the parties, stress that they are non-racist in their metadata.

Although, let's be honest here, if the very second word you use in your own choice of description tries to define what you are not, you've got a communications issue. 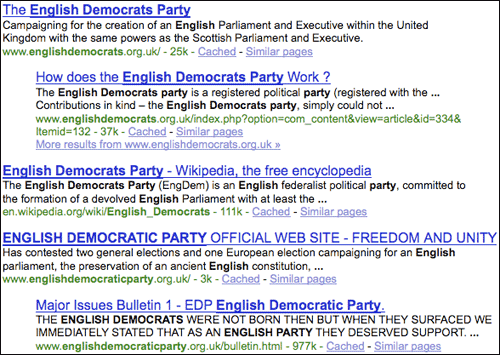 My strong impression that the Socialist Labour Party is just a vanity vehicle for Arthur Scargill is reinforced on Google. The party's metadata is all about Arthur, and Google has picked his biography out as one of the 8 mini site links listed.

"Union leader Arthur Scargill led this left-wing split from the Labour Party after its abandonment of Clause 4 which committed Labour to the nationalisation..."

The other 'socialist' party standing for European Election is the much more established Socialist Party of Great Britain. Their metadata on Google proclaims them to be a:

"Party made up of people who have joined together because they want to get rid of the profit system and establish real socialism."

I also noted from the Google results that they have nominated their MySpace page to be 100 years old and female.

Two of the parties looked like they need a bit of SEO reputation management done on their Google rankings. No2EU rank #1 for their party name, but at #3, and well above the fold on most monitors, is this blog post from Shiraz Socialist:

"NO2EU: desperate, useless and reactionary
NO2EU is much nastier and more dangerous than the inoffensive Peoples' Charter and should be actively opposed. Apart from being, in reality,..." 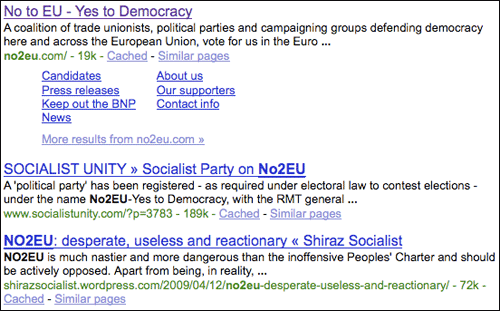 Libertas.eu have a more alarming case on their hands. A search for 'Libertas' turns them up at #2, the top slot being occupied by a shop specialising in adult products and literature for lesbians...

It could be argued that No2EU and Libertas are at the mercy of Google forces beyond their control. The Christian Party's downfall, however, is of their own making. It is worrying to think that people might put their faith in a party that can't spell their own name correctly on their website...

UKIP's "we're not racist, honest" comment reminds me of whomever pointed out that any country whose name starts with "Democratic" or "People's Republic" is highly unlikely to be either.

There was an assumption that the smaller parties would exploit the free nature of the WWW to try to equalise their standing and try and punch above their weight. I note the English Democrats use Facebook a lot, though few have open profiles (mmm good idea or bad idea - jury out on that one). But overall what you note here is that the largest parties are doing best but on the whole, still, few parties really seem to be taking the Internet seriously as a communication or campaign tool. Maybe things will be different next year...

The Conservative site used to have 'Skip to get involved [accesskey' as its bottom left sitelink.

They have fixed it now, sadly - I thought there was a certain truthfulness in ordering us to ignore its site to take part in politics.

(It also means I need to save up some more examples for my never-actually-going-to-get-finished post on lame meta descriptions.)