This week the Newspaper Society is promoting 'Local Newspaper Week'. The aim is to highlight the valuable links that our UK regional press provide with their communities. I've been collecting some clippings and screen-shots from several regional papers in print and online over the last few months, and so it seemed an appropriate week to start blogging about them.

Welcome to your new local...

I came back to London in October last year, and, being a newspaper kind of guy, started picking up the local papers in the new area I'd moved to. I'd previously lived in Waltham Forest and grown up with the Waltham Forest Guardian there. In N10, I had two papers to get acquainted with - The Muswell Hill Journal, and the Ham & High Broadway. Both are weeklies, both published on Thursdays. 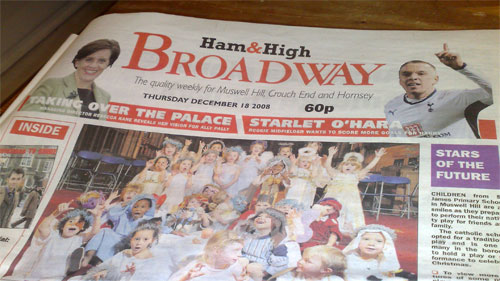 That actually seemed a little bit odd to me at first.

Both titles are owned by Archant, and it strikes me that if one was published on a Monday, and one on a Thursday, then there is a chance that I might buy both papers during the week. As it is, on a Thursday (or more usually Friday) morning, I generally make an either/or purchasing decision.

I'm probably a bit abnormal in my news junkie behaviour though, and, of course, the titles are clearly aimed at different market sectors, and have a different heritage. In fact, The Ham & High makes a point of their quality credentials, perhaps to justify their higher cover price - 60p as opposed to the Journal's 45p. 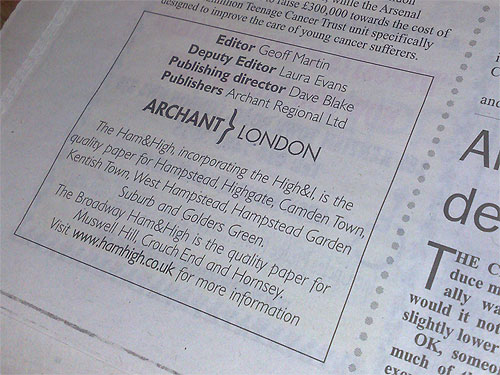 As a sector, regional newspapers have been shrinking, and are probably under more pressure than any other area of our industry. I should imagine that the workload in getting the paper out every week is intense, even more so when you can visibly see what looks like the impact of the credit crunch on the paper. The Muswell Hill Journals's four featured writers back in January have recently been reduced to the Muswell Hill three. 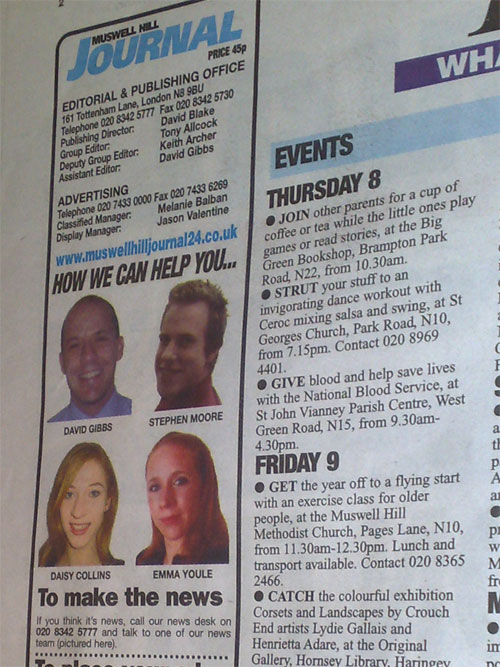 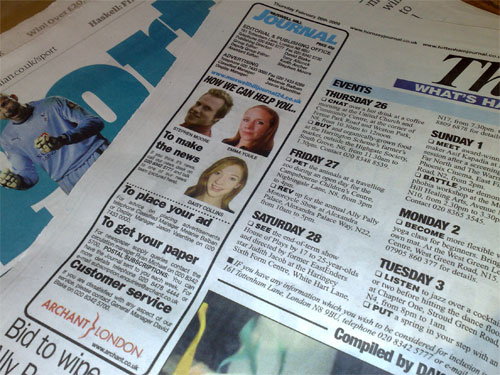 Actually, it isn't that long since the area supported an additional local paper. My barber has proudly been open for over 100 years, and in his window he has a clipping celebrating the centenary of the shop. It is from the now defunct Muswell Hill & Crouch End Times title. The issue is from February 2006, and the masthead advertises the fact that before the paper's demise it had moved into digital with the web address muswellhilltimes.co.uk. 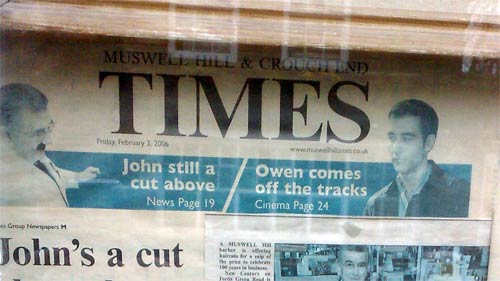 The web address now re-directs to the site for the Haringey Independent, a title which, in the six months I have been living there, has not once managed to attract my attention on the newsagent's stands.

UPDATED: Which is because the Haringey Independent is a free weekly, doesn't appear in newsagents, and I didn't do my research properly...

Over the course of the next few days I'll be looking at some of the things I've noticed in my local press about the areas where they are most under pressure and where there is most debate - advertising, covering local democracy, and adapting to the impact of the Internet.

So what did you think of these papers, were they useful, good, interesting, relevant? I lived in East Finchley/Muswell Hill for two and a half years, a long time to live somewhere for me, knew most of the "tradespeople" (local butcher, fish monger, dry cleaner ++) well and had a stronger sense of community than most other places I lived. This was also a period of my life when I read a lot newspapers, but I can't recall reading any of these papers. I did pick of a local paper a few times, and it would have been at the news agent on the East Finchley side on the way to the tube, probably Haringey Independent, Camden Journal I think - but whichever local papers I picked up they didn't become a habit. Had there been a good news site covering local news about restaurants, schools, new developments, deaths etc I might have added it to my online reading list now though.