This week it is the Newspaper Society's 'Local Newspaper Week'. I'm writing a series of blog posts looking at some of the things I've noticed about my local newspapers over the last few months, in print and online. Today I wanted to look a little at the advertising in my local press.

One of the traditional areas of revenue generation for the local newspaper was the 'announcements' page, where people paid to publicly announce births, deaths and marriages. This is a business model that is under a great deal of pressure from online social networking.

At first glance it seems like the page in the Muswell Hill Journal is still thriving despite the online competition. 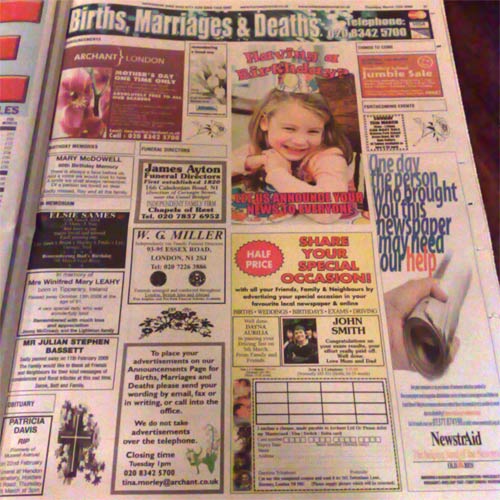 A closer look, however, reveals that much of the inventory on the page is taken up with various ad spots self-promoting the service. 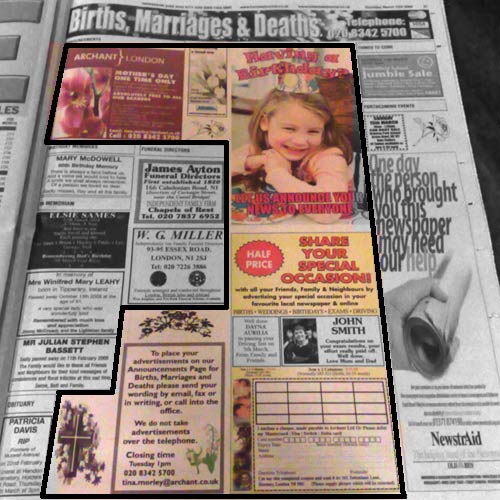 I mentioned on Twitter and on Facebook this week that my wife is expecting our first child. When it arrives, I'm simply unsure why would I pay Archant to announce the birth of a child to everyone who happened to buy the paper that week, when I can use Facebook, Twitter et al to announce it personally to my friends and colleagues for free?

This isn't just a function of the arrival of the Internet though. The announcements model is an old one in newspapers that are closely rooted to their communities. However, we have to ask ourselves how close these roots are anymore. To announce the birth of our child to my friends and family, I'd need to be placing adverts in Muswell Hill, Walthamstow, Leeds, Crete, Salzburg, China and Australia.

Asking my family, they could dimly recall placing an announcement of the funeral of one of my grandfathers in the local press at the tail-end of the 70s. This was because they were unsure of how to contact his old work colleagues, and he had moved away from the area where they'd worked together. From Walthamstow to Chingford.

One of the conundrums of the local press is the editorial disconnect between the message and the advertising. One of the biggest local issues in my area over the last couple of months has been plans for a lap-dancing club to be licensed in a residential area near a school. Residents have been campaigning against it, and the local press have been backing them. 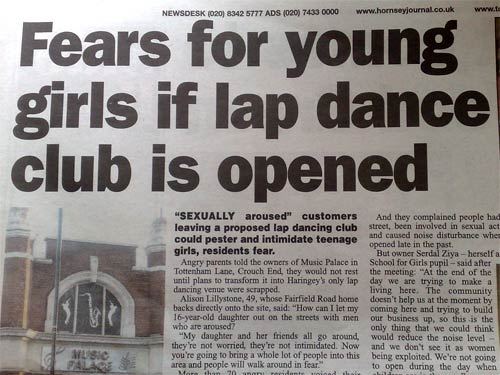 Whilst at the same time taking the money for pages of illustrated classified ads for local 'massage' services.

However, despite the current downturn in display advertising, there is no doubt that regional newspaper advertising still has a role to play in generating a vibrant local economy.

Despite the existence of national and hyper-local business listings online, I remain unconvinced that all of this business will migrate away from print, in the same way that not all estate agency advertising migrated to their own self-produced magazines. In terms of getting timely advertising out to local customers, few mediums can be as well targeted as the local newspaper.

Advertising initiatives can work for the benefit of both local businesses and the newspaper. Plenty of the eateries near me still display branding for the local newspaper having been nominated for awards, even years ago, a constant reminder of the link between local services and the paper that serves the area. 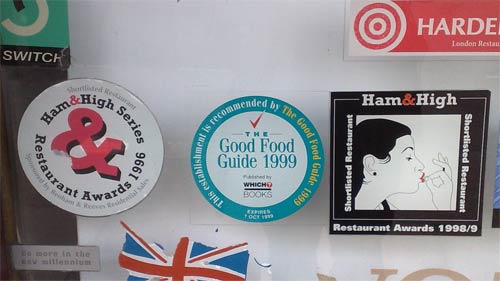 In the next part of this series I'll be looking at how some of the issues of ensuring transparency in local democracy have unfolded in the local Muswell Hill press over the last 6 months.

On the subject of sex adverts, some local newspapers have taken a stand against this, despite the hit they will take to their bottom line.

The Croydon Guardian is running such a campaign, and is using it to bash the local competition on a moral basis. Of course, its parent company Newsquest is now firing a load of staff...

Of course, its parent company Newsquest is now firing a load of staff...

They are certainly not alone there...

Jon Slattery has more on the local press and sex trade ads here. And what is the betting I end up with some fruity AdSense adverts on this page making me look like a hypocrite :-(

I must be more old-fashioned than I thought. I'd definitely put in an ad for b/d/m in my local paper. Possibly because I've lived here my entire life and so have most of my family. We always read them as well, my dad is miserable as people he went to school with keep dropping dead over the past few years. And its a way of keeping up with family who don't see the need to keep in touch anymore, but still live around here.

But I'd be posting it online as well.