It isn't in the too dim and distant past that if you wanted to get some newsworthy video footage published in the UK, you only had a choice of taking it to the BBC, ITN, or Sky. Now the majority of serious newspaper websites have the ability to embed video on the web, and some, like The Guardian, Telegraph and The Sun have made multimedia studios an essential part of their newsroom set-up.

Last week one of the biggest news stories was the emergence of footage that showed the interaction between the police at the G20 demonstrations and Ian Tomlinson, who subsequently died. This video-led story first appeared exclusively on The Guardian's website. 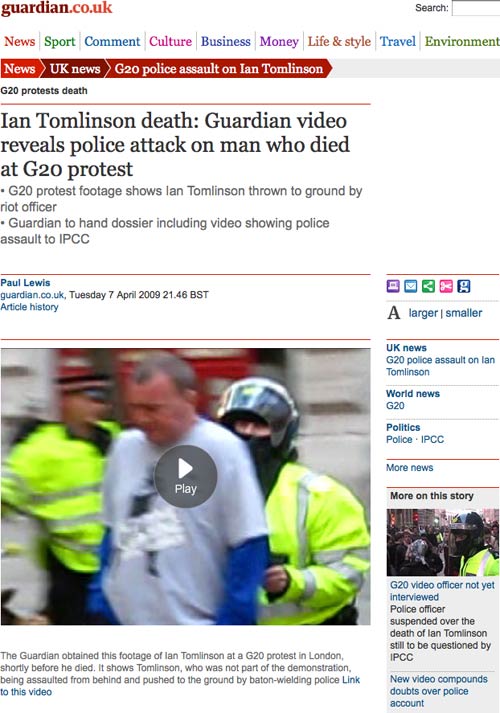 The way The Guardian handled the story was a sign of the digital times. Not too long ago this would most likely have been held back from the web, so that the crucial still images could be splashed as a front page exclusive in the morning, scooping all rivals to the story.

Instead, the site led with the video in the evening, ensuring that the visually strong content had to have a presence in the print editions of all the next day's papers.

Having The Guardian's logo burned into the video footage meant that many other online news publications had to display images which advertised the fact that they had not been the first paper to get access to this content. They approached reproducing the images and crediting The Guardian in a variety of ways both in print and online.

The Daily Express, for example, had The Guardian logo in an ITN produced video package on their video channel, and several stills online, with Guardian branding clearly visible. 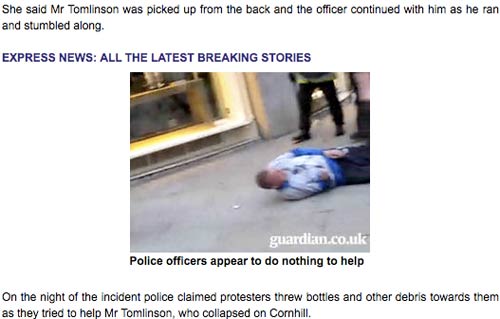 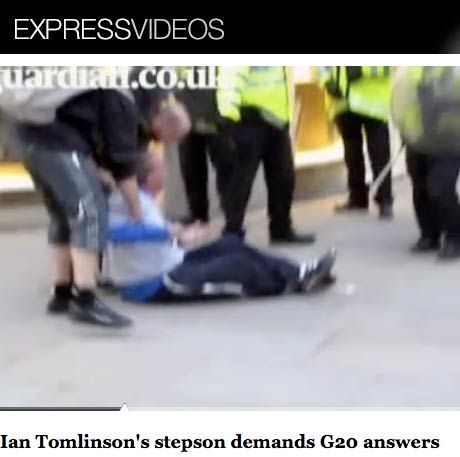 The Daily Mail also used several stills, but cropped them to avoid using The Guardian logo, and instead placed a copyright credit in the bottom left-hand corner.

The Mail also embedded The Guardian clip, via the version that had been uploaded to YouTube 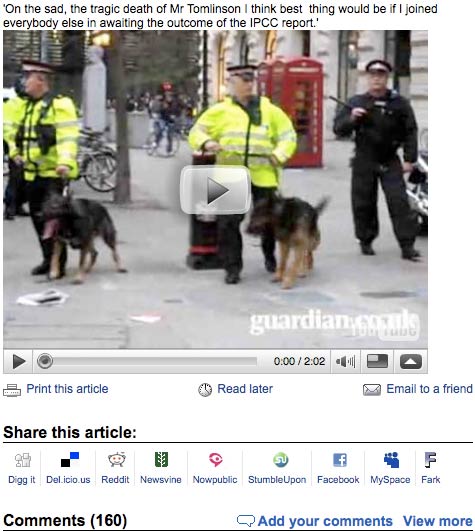 The Telegraph produced their own video package of the story using the clip, but they also linked out directly to the original Guardian hosted copy. This was done both as a 'related external link', and as an inline link within the story. 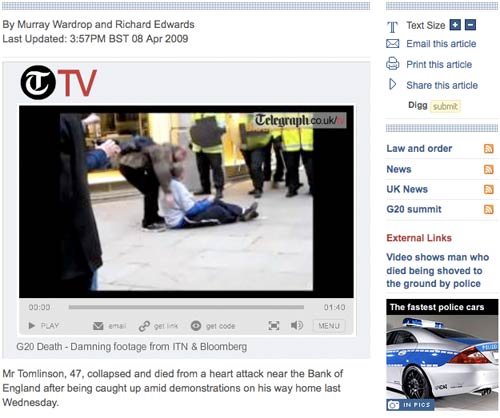 Christopher Hope also linked directly out to The Guardian clip on his Telegraph blog.

The Times carried a very prominent link directly to The Guardian to view the original video, as well as their own Sky News provided package. This displayed The Guardian's logo, and gave an additional credit overlay during the sequence. 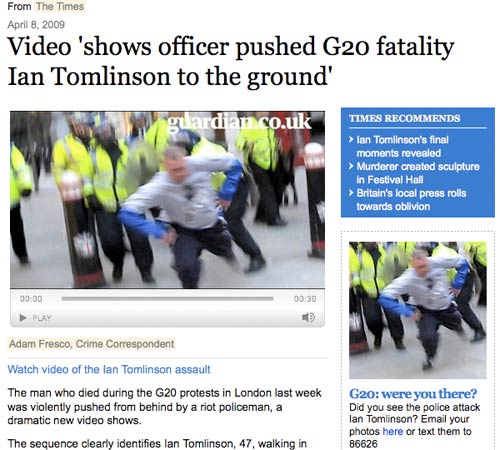 The Guardian's logo placement did not work in all places. Copies of the video were uploaded to YouTube, and I noticed that where this version was embedded on the web, the YouTube logo overlay and Guardian logo overlapped. 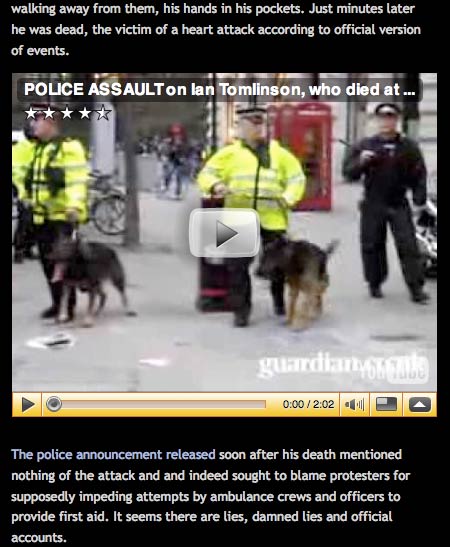 This is clearly an evolving art - you need the logo to be in a place that can't easily be cropped out by other news organisations, but you don't want it to either obscure the action, or be obscured by video-player overlays.

For TV there is an accepted standard of a safe area for what will appear when video broadcast in the 16:9 aspect ratio is being viewed in 4:3. DOGs fall into this area, and within the UK, the channels have a (pretty much) standard DOG position, which means that a director should be able to frame the action so that it isn't obscured. We don't yet have that standard for placing video in multiple places on the web.

The story was slightly different in print, where the vast majority of the press cropped the images so as not to show The Guardian's logo.

The Daily Mail mentioned that the video had been obtained by The Guardian in their article, but had succeeded in cropping out the watermark from the images. 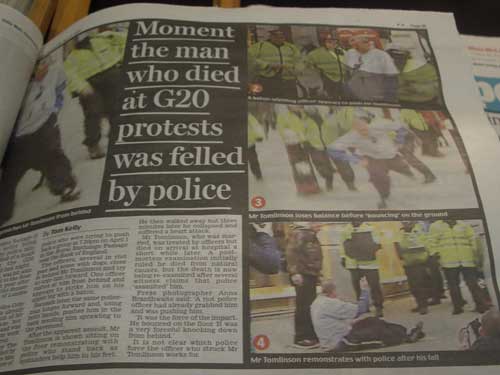 The Evening Standard ran with a full page showing stills from the video, with The Guardian logo cropped out. Instead a small vertical photo credit was applied to the edge of one of the pictures. 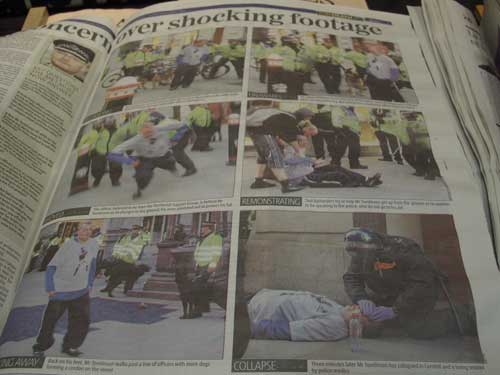 Although on the web The Telegraph had been happy to deep-link to The Guardian's story, in print only a very small picture credit was given at the top of the images, with no logo on display. 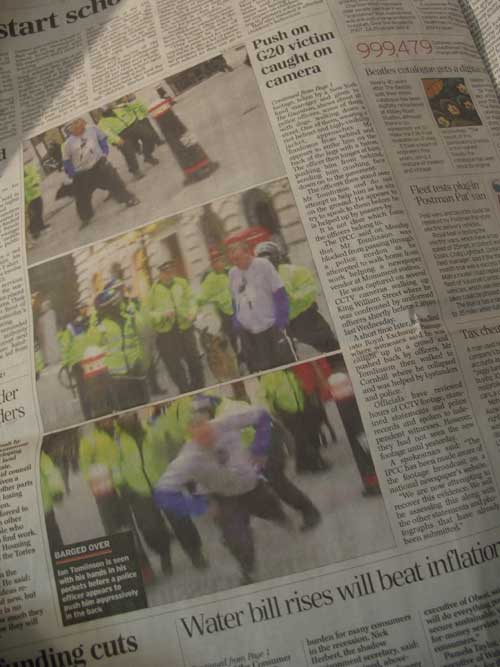 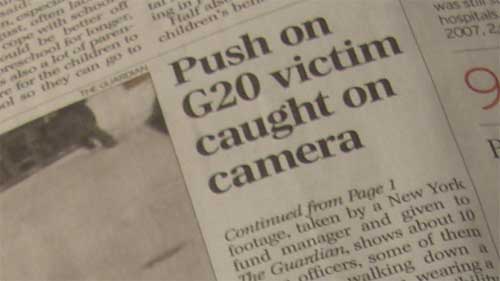 The Daily Express had a small credit next to the images, and The Independent opted to use a still from a Sky News broadcast, which neither fully shows the Sky News logo, or the on-screen picture credit they gave to the paper. 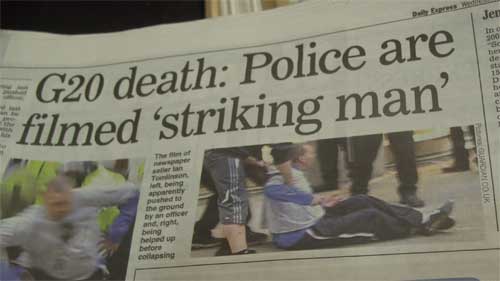 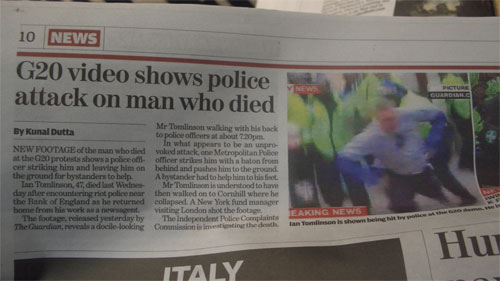 The Times probably had the most visible placements of the guardian.co.uk logo in print. Indeed it looked like they overlaid the logo themselves as a credit on all of their crops. 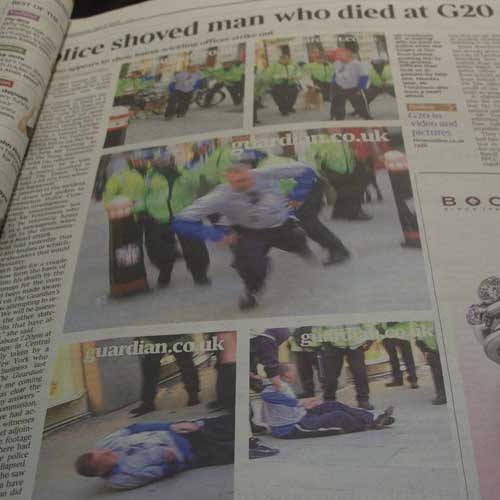 By contrast, in print, The Sun managed to publish images from the video, and quotes from the victim's son which had first appeared in The Guardian, with no mention whatsoever of the newspaper, or any copyright credit on the photograph. 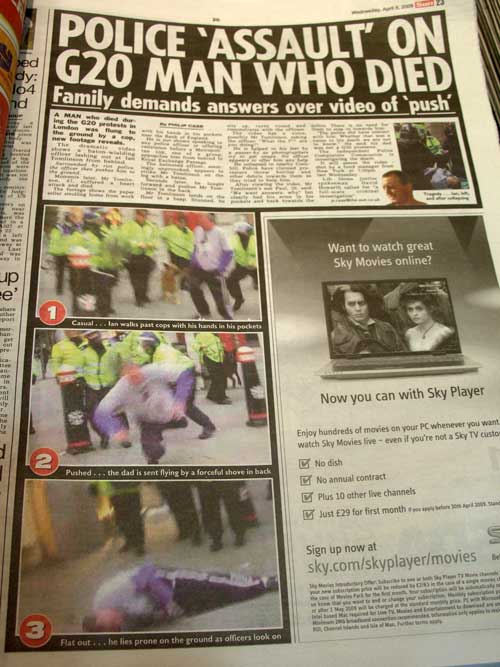 So the interesting question is why there is such a big difference in the approach taken online and in print. Online the majority of the serious papers were unstinting in linking to and crediting The Guardian, whereas in print there was a much greater reluctance.

Partly it is the nature of the medium. Users on the web are much more promiscuous with their news viewing habits, and know that there are a range of different sites out there. Furthermore, to not link to the original source of a story is considered bad manners on the web, and net-savvy journalists and production staff will tend to link out as a 'digital native' instinct.

I also think it is a cultural output of being in a traditional media business. In print, you don't really want to give your readers any excuse to alter their purchasing choice. Especially not by pointing out that a rival had a massive scoop, even as you are required to follow their setting of the day's news agenda.

It's really interesting to see how something can spread, and also how to get the benefits of that content being passed around.

And I concur with the conclusion - it's definitely a cultural and medium-led difference between online linking and print denial!

I'm quite interested in the copyright side of this. Obviously the video is the copyright of the original cameraman (the New York fund manager) but he may have sold/given the rights to The Guardian. Therefore aren't the other newspapers actually breaching copyright law by reproducing these images (or, if they have copyright permission from the NYFM or Guardian, then why didn't then ensure the "original source: guardian.co.uk" tagline is specified in the copyright/reproduction agreement).

Or is this a case of newspapers going "it's fine for _us_ to "steal" content and copyrighted materials - but if you try to "steal" anything from us it's another matter..."

The ethical side of using online content is an ever evolving and always intriguing one. I've long been a believer in the CreativeCommons.org concept, but stuff that's clearly labeled with a "Bug" (media entity logo) does seem to require up and up treatment. Can't imagine the Guardian being a "free to use, share, distribute" type of company.

I'm still looking for a definitive use policy for stuff that pops up on YouTube, Google Video, etc. I do tend to use relevant clips, but always try to cite/credit back to the original source.

I'm here in Florida, but believe international copyright use rules do apply.

This post is a great resource for anyone who wants to start a discussion on the issue. Will be posting it to my social networks for sure!

Can't imagine the Guardian being a 'free to use, share, distribute' type of company.

Actually Kevin, with the Open Platform API The Guardian are moving more in that direction, although notably the re-distribution has to comply with the legal T&Cs, and multimedia content isn't included in the platform yet

This is a great piece of investigative journalism.

I love your insight into new media trends, as well as your lateral approach to using many of the new technologies (like your earlier street view post).

It's interesting to see just how badly many 'old media' organisations behave when crediting the references for their stories.

Bloggers acting similarly would soon have a backlash and a loss of respect.

Actually, I used the Youtube version as I couldn't embed the video directly from the Guardian site.

I wouldn't underestimate the role of Twitter in spreading the story as well. The #g20 and #iantomlinson hash tags are still going strong and many users linked to the Guardian video.

It's all branding isn't it? You can see that they are imprinting their brand in your mind so that if your regular brand is something else and the shop is out of stock then you are likely to pick up The Guardian instead. Maybe you'll like it so much you'll end up switching.

Thanks for the insight into media trends. We tend to look at the media for trends without actually analysing the media itself!

My website actually focuses on videos and I really appreciate all the advancements we've seen with internet connections and free flash players. Branding is important and I tried having people upload their videos directly to my website, but it ended up being ineffective. Youtube simply took over and took more than half of my traffic with it. People now upload their videos to Youtube rather than my site. It's quite frustrating because my site was far more successful before Youtube. I actually allowed people to show off their soccer skills by uploading videos on my site. Anyways, I've had to change my strategy so now I allow people to embed their videos on my website. It takes away from the unique content but it helps me brand my site on Youtube.

This cornered credit to Guardian.co.uk just for name sake is a worst case scenario. People should be given due credit when you get some help from them. Some start-ups fail because of the lack of good business ethics.