I spotted another electronic signage oddity on the Victoria Line the other day, to go with the recent 'No message' I saw at Walthamstow Central. This time it was at Finsbury Park. 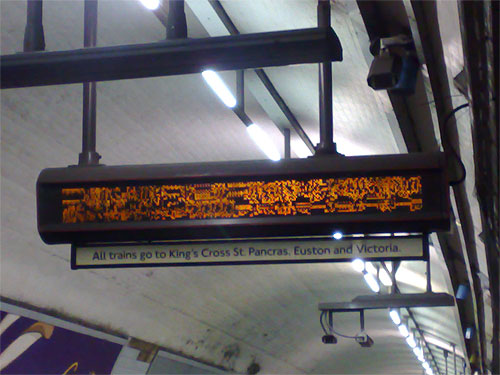 Now, I know that it is just a random scramble of pixels, but there looks to be something a bit Arabic about the writing. Given their propensity to publish anti-Islamic terrorism scaremongering at the drop of a hat, even if it is completely unfounded, I'm surprised this hasn't already appeared in The Sun as evidence that Osama Bin Laden is using the Victoria Line to send coded electronic messages to 'underground' British Al-Qaeda sleeper cells.

If you stare very hard and relax your focus, you can just make out the image of a train arriving on time ...

I think you're just seeing things - the Tube's digital indicators are so old I doubt they can print anything more than ASCII, let alone Unicode.

I'm sure I read somewhere that they had to use eBay to source spare parts for them now because the system is so old - but Chris, I think you are under-estimating the power of these pernicious terrorist organisations to hack into the system and patch in Unicode support without TFL noticing.