Yesterday, The Mirror was reporting a further development in the story of the 13 year old boy named as a father. The initial coverage of this story was a significant factor in boosting The Sun from #5 to #1 in the UK newspaper online charts.

Today, The Mirror has pulled the story from their site. It is an interesting test case of whether legal deletions should also cover SEO-orientated keyword stuffed URLs. They might have pulled the story, but I can still read the headline on the resulting 404 page. 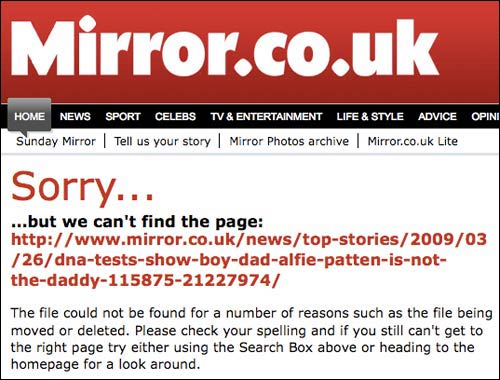 They have also had it removed from Google's cache. 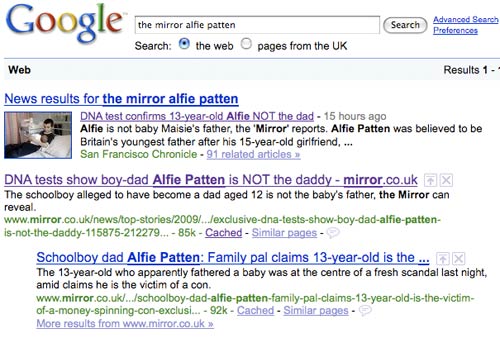 However, if, following the Barclays / Guardian tax spat you wanted further evidence that our court procedures over the press are a bit broken in the digital era, you only need to pop the name of the boy into Google News UK.

Although the British press are maintaining a court-enforced discrete silence on the issue, Google, at the time of writing, had 91 articles from around the globe repeating what The Mirror has said.

The San Francisco Chronicle's 'Mommy Files' blog, for example, has a big chunk of verbatim text from the article, and is still able to publish pictures of the lad and the baby at the centre of the story.

Still, as I observed on Twitter yesterday, luckily for The Sun, neither DNA tests or court orders can retrospectively take away record page impressions.

You might also be interested in:
Why it is OK for Daily Mail readers to call a 13 year old girl a slut - February 2009
Protecting the identity of Baby P's killers: The courts vs the people vs the Internet - November 2008

You can put whatever headline you want into the Mirror URL and get a 404 page though: http://www.mirror.co.uk/news/top-stories/2009/03/26/Currybet-Press-silence-on-Alfie-Patten-DNA-test-result-broken-byGoogle-News

True, but unlike the original example, you can't get that spoof URL from the top result of a Google search!

ah, thanks for this. fascinating - i knew when the mirror story broke that the gag order might be a problem, presumably they figured that risk into the upside of worldwide hits.

I can't help wondering whether making The Sun and David Cameron look a bit stupid might have come into the equation as well ;-)

I wonder how long it'll be before this page becomes a 404 as well...

After reading the Mirror story in print yesterday, I published a blog post about the dodgy media coverage of Alfie Patten. Then I realised no mainstream British media outlet was touching the story, got nervous and took it down.

I'd be keen to find out what's going on at the Mirror. How come they published it in the morning and then pulled it in the afternoon? Is it a big mess-up, or did they do it deliberately to try and embarrass the Sun?

It's ludicrous that anyone can type "Alfie Patten" into Google and read exactly what no newspaper (or UK-hosted website) is allowed to report.

Great post. To follow it up, there seem to be two UK sites - one of Walt Disney's and Haymarket's Brand Republic - still reporting the Mirror's story.

Hope their lawyers are working weekends and can check the terms of the reporting restrictions.

Unfortunately, it's exactly these kind of issues which the Government will use to justify censoring the internet.

At the moment, it wouldn't play well to censor parts of the web just because they are critical of politicians.

But if politicians can spin an arguement that the courts - and by extension the public - are being wilfully defied online, then there could be some public support for 'partial' censorship.

The question is why has this been kept out of the UK media?

There was such a media circus and as you mention, this was enough to boost the Sun's readership.

Is there suspected criminality here? A deliberate plan? Investigation into the conduct of the Sun and payments made?

Or is it just Max Clifford pulling strings with hacks?

It is appalling the way the media creates a story and a media circus and then just dumps the story and moves on to the next sensationalist rubbish when that turns out to be false.

The first time that I am reading this blog - stumbled while searching for the Alfie Patten story - Must say you're a brave blogger.

I really didn't know that even UK internet is being sersored. I guess thats pretty idiotic since you can easily censor the BIG foes like Mirror but what about the thousands and thousands of bloga and websites the British govt. has no control over? What the point then?

Anyways You should thank God that you're not in Asia, at least people don't get sentenced for raising issues there!

what is the importance of this post?? If the point is that Google has defied Court in revealing the story, then the post has something in it. But if your story is meant to highlight a boy who had sex with a girl at the age of 12 then we are glorifying something that is not morally right.

That's the beauty (and the problem) with the age of digital distribution. You can censor the originator but someone else (weather it be a blog post, a tweet or an article) will pop up in their place if you know how to search. Censorship is becoming increasingly difficult to enforce, and I can see both positives and a few worrying negatives with this fact.

I wonder what a company has to do to get Google to remove a page from its cache - I can't even get a call in to them.