If you've ever played the game "Shadow Of The Colossus" you'll know that it features a small warrior fighting creatures much larger than himself. Each of the creatures is beautifully designed and rendered, made out of organic and natural material, and they seem mostly harmless. When our brave warrior attacks, the monsters end up stumbling and crashing around, unable to pick themselves up and defend themselves properly. At that point, strategically aimed blows can destroy the creature. 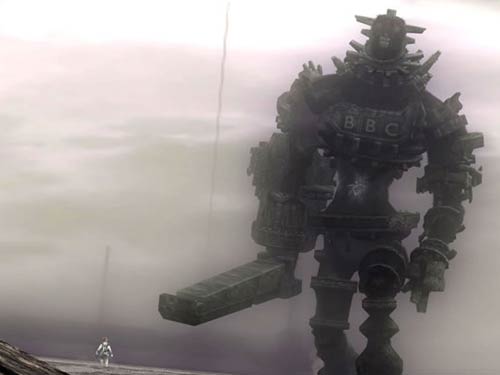 At the moment, the BBC seems to me from the outside to resemble one of those creatures. Having stumbled once, it now seems to be lurching uncontrollably from crisis to crisis, unable to find its feet long enough to stand still and stabalise itself.

This weekend should have been all about some lame media attempts to stir up more controversy about Jonathan Ross - instead of which the BBC has become embroiled in a political and media storm around the decision not to broadcast a DEC appeal for Gaza.

Not that the BBC has totally suppressed the information. Tony Benn has given the details out on the Today programme, and there is a box-out on most of the BBC News website stories about it. 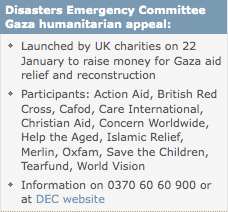 Without wanting to get dragged into the rights and wrongs of the position that the BBC has taken, it must be said that no single topic is so divisive when it comes to BBC coverage. Depending on where you stand, the BBC decision over the DEC appeal is either a fig-leaf to cover a previous lack of impartiality, evidence that the BBC will do absolutely anything to appease their Israeli masters, or a cunning ruse to to gain even more publicity for the appeal than merely broadcasting it ever would have done.

The vitriol that used to be sent into the BBC during every inflamed period of conflict from both sides was astonishing. You can get a flavour of it on the Have Your Say message board on the topic or the comments left in reply to Director-General Mark Thompson's blog post about it, although the worst stuff won't have been published.

To this day I still get occasional personal emails and comments left on this site accusing me of all manner of heinous thoughtcrime against one side or other, because of things written here and my association with the BBC.

And there is another tell-tale sign of how personal and racially charged this debate is.

At the moment the most popular archive page on this site is 'Mark Thompson survives online Telegraph grilling'. It is currently seeing a lot of traffic because it is ranking highly on Google when people are searching for keyword combinations like 'mark thompson jew' and 'is mark thompson jewish?', to see whether the Director-General's personal religion has been a factor in the decision. 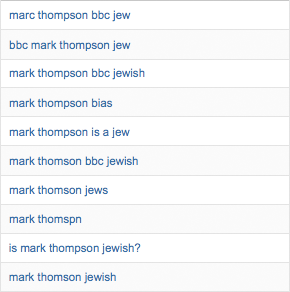 Read other recent posts about: BBC, Politics, Popular, Post of the moment

You only have to look at some of the comments made during the broadcast of the Diary of Anne Frank (which included from "It shouldn't have been shown because of Gaza", "This is pro-Israeli propaganda" and the flip side of "This is anti-Israeli propaganda") to know that the BBC's forever going to be stuck between a rock and a hard place on this one.

you should see what's happening on talk.gateway - lots of discussion with a distinct tinge of bias, and a reference to MT's religious background and family

Perhaps this will help with the Mark Thompson question