In the lull between Christmas and the New Year, I got to visit a couple of the more obscure corners of Alexandra Palace, thanks to open days put on by local enthusiasts. One of the venues which is otherwise seldom open to the public that you could visit was the Victorian Theatre. 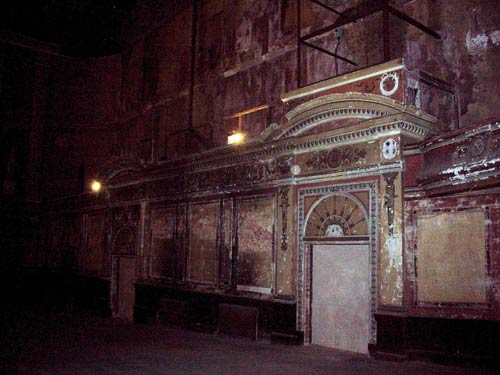 The Victorian Theatre can be found at the eastern end of Alexandra Palace, alongside the ice rink. This was added as part of the rebuilding following the disastrous fire of 1873 which gutted the original Palace, just 16 days after it had opened.

Despite being in a wretched state of repair, the building retains a couple of unique historical features. The theatre area has the original Victorian mechanised timber stage. It was also frequently utilised as a cinema, and at the rear of the balcony is a 1900s projection box that is one of the oldest still existing in London. 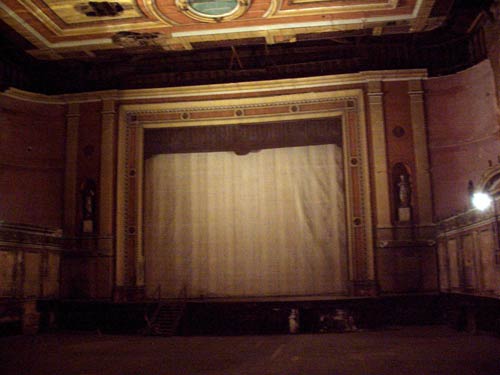 The decoration that can be seen today is the result of a refurbishment in the 1920s, although the centre-piece of the ceiling retains traces of the original Victorian decor. 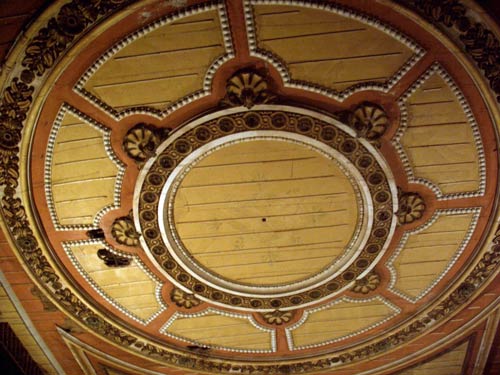 Alexandra Palace was used as an internment camp for refugees and prisoners of war during the First World War. Reparations payments from Germany were used to fund the redecoration. A plaque outside the building stands as testimony to the wartime use of the palace. 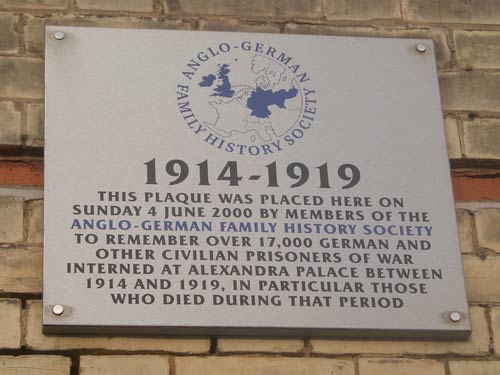 As it stands now the theatre is very dimly lit, and access to most of it is restricted to those wearing hard hats. Productions and organ recitals are still occasionally put on, and the care of this part of the building is in the hands of the 'Friends of Alexandra Palace Theatre'.

By the late 1930s the east end of the Palace was leased by the BBC, and the theatre was relegated to being used as a prop store for the television programmes being broadcast from the studio next door. Tomorrow I'll be posting about my visit to those studios, from where the world's first regular high definition TV service started.

l understood that there was a lien on a lease of the Theatre in favour of the Mountview Theatre School/Theatre Academy....Haringey purchased the Palace for £1.00 from the GLC in 1980 as l recall...and always carried the maintenance liability from the Haringey Rates and Taxes. Are there renovation plans in mind? christine jaritz

Looking at the local paper this week Christine, it seems there are still all sorts of complications left over from the financing of the Alexandra Palace in the 1980s

Dear Martin
Thank you for your observations arising from your visit to the Alexandra Palace Theatre.
The Friends are meeting tomorrow night to decide on a fund raising strategy so that the theatre will be able to return to full use.
I am not sure about Christine's comment re Mountview, but I am sure we would work with any other theatre.
Best wishes
Colin Richell
Publicity Officer Friends of the AP Theatre

i too visited the abandoned theatre within Ally Pally and was dumbfounded to find that it had been left for dead. i would love to do something to let people know about it, support some kind of action, so ive started a Facebook page dedicated to the theatre. i took some pictures when i visited and cannot find them on my memory cards..? still searching..would you mind if i used one of your pics until i find mine? Save Alexandra Palace theatre is the group..i can display your name and your website link if you like?

Please feel free to use the images Jess

Dear Jess
I am not sure whether I did respond to your message, but we do have a meeting tonight, and I though you might like an update, although not good news.
The audotorium is closed because the ceiling is unsafe, and we are unable to access the foyer because the ice rink is being rebuilt, and will be finished in January.
The Trustees are talking to English Heritage in the hope that we can obtain further funding over and above that provided for the restoration for some of the unique stage machinery,
The Friends are willing to fundraise on behalf of The Trustees, if EH are unable to assist.
The Friends continue to meet on a regular basis and we are determined that the theatre will NOT be left unused for another 40 years.
Before the closure the BBC recorded a programme on the life of Dame Margo Fonteyne in the theatre.
I would be happy to keep you informed of any developments.
With best wishes
Colin Richell
Publicity Officer Friends Of The Alexandra Palace Theatre.