Navigating newspapers: Part 1 - We are what we label

The names, language and labels that we use to describe things unwittingly tells people a lot about our attitudes and beliefs. The order in which we describe things helps communicate the relative importance and interest we place in them. So I thought it would be interesting to look across the UK newspaper website landscape and look at the way the papers sign-post their content to the user. In short, how do they label their navigation?

I looked at 9 national newspapers, and noted down every first and second level link in their primary web navigation. By top level I mean, for example, the strip that reads ''News | Sport | Comment | Culture etc etc' across the top of The Guardian site.

By second level, I mean links nested under those major sections, for example the links to 'Forces' and 'Royals' in the left-hand navigation when you visit the 'News' section of The Sun's site.

The nine papers I looked at were the Daily Express, Daily Mail, Daily Mirror, Daily Star, The Guardian, The Independent, The Sun, The Telegraph and The Times. [1]

I was interested to see to what extent the labels might be homogenous amongst the newspapers. I wanted to see if they all referred to certain topics in the same way, and if they used similar broad schemes of navigation.

In total I looked at 834 navigation labels from the 9 different national UK newspapers.

Amongst these there were 457 different terms or phrases used. 387 of the labels were unique in only being used once, in one place, by one newspaper. This table gives an overview of the number of first and second level navigational links on each newspaper's website.

The following table illustrates the 25-or-so labels most used across the newspapers. I aggregated multiple appearances of the same label on the same site, which explains firstly why 'Columnists' appears more than 9 times, and why 'Star Videos' also features. The Daily Star has appended this navigation element to each of the secondary menus across their site, making seven appearances in total. 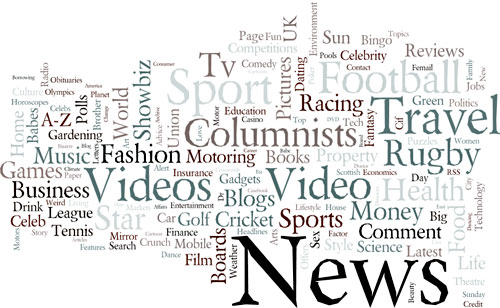 In the next part of this series, I'll be looking more closely at how the top level navigation labels of the UK's newspapers map together.

[1] I did not include the Financial Times in this study as I felt the navigation on the site was likely to contain a much higher proportion of specialist terminology than you would expect from a mainstream newspaper. [Return to article]

Interesting article, will you cover UGC in one of your articles? I did some XML CMS work with Metro (European version) newspapers a few years ago and I know they spent sometime on this subject to make navigation easier for their readers/visitors. Will await your next article. - Mike