I had the opportunity to be at NESTA this morning to see Channel 4's Andy Duncan give a keynote speech about the future of the creative industries in 'Digital Britain'. The speech contained a very strong call for UK regulation of the Internet. 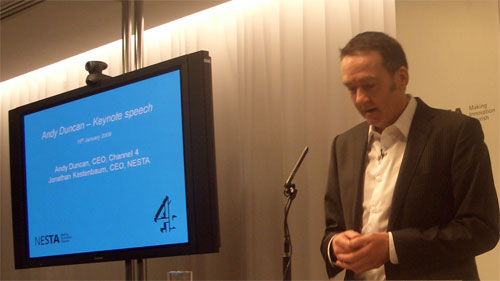 He described it as "bonkers" that the broadcast world was regulated, and the broadband world wasn't, when to his children they were indistinguishable. He fingered Google and ISPs as companies who were making huge amounts of money in this sphere whilst "ducking" their responsibilities. He thought self-regulation of the Internet would be the way to go, citing the success of self-regulation in the advertising industry as a comparison. Of course, as a geek it is always hard not to equate Internet regulation with Internet censorship, but Andy Duncan warned us of the dangers of complacency. These businesses, he suggested, knew more about each one of us than East Germany's Stasi could ever have hoped to find out.

He also put up a robust defence of Channel 4's unique position in Britain's media landscape, citing rising audiences, rising ad market share, global award recognition, and claiming that the company's hybrid private-public model was truly "the best of all worlds". He was full of praise for the "enlightened" regulation of the television broadcast model which had served audiences "brilliantly" for 50 years. However, he feared the system was at the point of imminent collapse. He felt that at a time when government was being called upon to nationalise banks, to be still debating whether to put a few more computers in libraries didn't cut it as a strategy to deal with the digital divide and the broadcasting funding crisis.

I was heartened to hear one of the major figures in our media industry really spell out the situation we face with the online globalisation of the advertising market. In June last year I wrote that:

"What increasingly worries me is that we seem to be spending so much time and effort in the UK arguing about whether our playing field is level, that we haven't noticed that Google has already run off with our ball."

Andy Duncan had the figures in his talk to bear out this analogy.

"Earlier this decade the television advertising market in the UK peaked at over £3.5 billion. The majority of that was re-invested in new content, overwhelmingly by the commercial public service broadcasters. This year the value of that market is likely to be less than £3 billion; in other words, while the economy has grown, it has shrunk. Ten years ago the online advertising market barely existed. Today it is worth about the same as the TV market, almost £3 billion. In the new online world the bulk of the ad revenues - over £2 billion of that £3 billion - goes straight back to the US and very little of the entire sum finds its way into UK content production."

It still strikes me as incredible that to promote competition in the UK, a project like Kangaroo is strangled at birth by regulation, whilst YouTube, MySpace and Flickr are left with a completely free hand to develop UK market dominant video-over-IP services.

The news-gathering parts of our media ecosystem barely got a look in, however he mentioned the theory of the user generated 'fifth estate' rising up to hold those in power accountable in the way that the 'fourth estate' has done so for the last 150 years. This might compliment the failing fortunes of our press industry. To that end, Andy Duncan saw public service tools like 4IP as a vital part of Britain's future digital society. He described it as a "digital machine tool factory - helping equip Britain with tools for 21st century living." 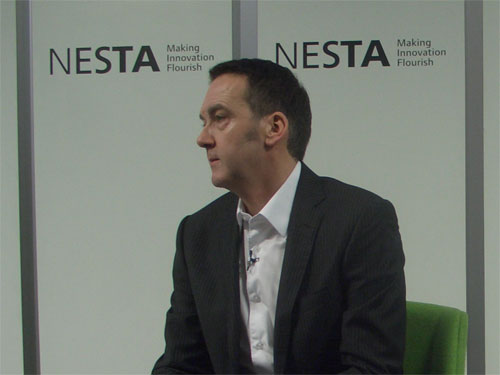 For me he did strike one wrong note in the Q&A session that followed the scripted speech. Asked whether Andy Burnham's idea of age ratings for websites was a good one, Duncan appeared to say that "it might work". I have to assume he was just trying to be polite in public about an idea from the Culture Secretary which is patently unworkable, especially given the rest of Andy's views on the globalisation of the online world.

The other thing that came out very clearly in the Q&A session was that even as he was appealing for the industry to put aside vested interests, people still just wanted to know the nitty-gritty of what he thought about a potential merger with Five or about the BBC's partnership offers.

Andy Duncan cautioned that without a focus on the bigger picture, there is a risk that the media industry could miss a real moment of opportunity. He stressed that whilst politicians care more about jobs going in the car industry than the creative industries, in truth, it was the creative industry that was more valuable to Britain, was a place where the country was more globally competitive, and was an industry that would ultimately form the cornerstone of our future culture and society.

The full text of Andy Duncan's speech can be downloaded from the Channel 4 site.

I am far from convinced about Mr Duncan. I think the error is to compare the Broadcast Industry with the web. They are not the same and never will be. Any attempt to regulate the web will fail.

Very interesting thanks Martin. I reckon that the creative industries are going to become a central part of Lord Snow's Digital Britain paper at the end of the month, judging by the way he was talking at yesterday's eForum on Digital Britain.

It's a bit disappointing to hear Andy compare TV with the Internet, given the fact that they are completely different mediums. It's clearly far more easy for a 2-way medium to self-regulate, compared with a 1-way medium like TV.

Advertising is self-regulated? So there's no need for trading standards etc?

The BBC should be regulated - we're forced to pay for it. As for the other channels - let a hundred flowers bloom.

Well, why not equip individuals with tools to bypass or avoid or redress the balance of power between them and "these businesses" that know more about "each one of us than East Germany's Stasi could ever have hoped to find out". I don't like that situation any more than Mr Duncan but I wouldn't be foolish enough to suppose regulation will remedy that!

Regulation will only distort what is arguably the most dynamic and innovative space in history of mankind. So put down that regulation and keep away from it!