I had a hectic day on Tuesday, as after speaking at the FreePint stand at Online Information I then headed into central London for the last Chinwag Live event of the year. Entitled 'Xmas futures, crystal balls?' it asked a panel of experts, chaired by the BBC's Richard Titus, to gaze 5 years into the future and imagine the mobile and new media landscape in 2013.

Certainly the person on the panel with the most intriguing sounding job was Jonathan Mitchener, BT's futurologist. As well as a neat line in quips about the role ('Well, of course, 2013 is far too short term for me') he had an interesting take on privacy.

He suggested that people worry about ID cards, but that nobody loses sleep over the data Tesco holds on them, because in the case of the latter they perceive a benefit.

He illustrated the point with an anecdote about attending a conference with 'active' delegate badges.

Using RFID technology, the organisers were able to message him by making something appear on the badge of the person he was talking to, and at the end of the conference he could get a list of everyone he had spoken to. He'd given up the privacy to be able to wander around the venue at will, but in return had got something useful.

Ewan MacLeod was another lively contributor to the panel, with some delightfully outspoken views on the mobile industry, typified by this sort of outburst:

"I see Nokia have announced another $%!t phone today (the N97). Please don't bother to buy it, it only encourages them"

Ewan was scathing of the telco's current business models. He hoped by 2013 that we would be in a position where the consumer chose what software could run on their device, not the network. He'd also like to see a situation where cross-network calling tariffs weren't nearly as expensive as 'calling Luscious Linda'.

Simon Collister made one particularly telling point for the promotions and advertising industry, when he said never mind the future, this year one of the leading trade mag's big tip for 2009 was....wait for it...'digital'.

One of the things raised by Jamie Coomber was the potential generation gap exposed by the number of simultaneous sources of information we could monitor. She finds that at work she is paying 'continuous partial attention' to Facebook, email, Twitter and her actual work, and comes home knackered. 7 year olds, by contrast, seem to take that level of digital information over-loading in their stride.

A couple of questions from the floor tried to get the panel to address issues they had omitted in their initial answers. One of those was the 'G' word, and whether Google's commitment to an open development platform with Android had changed the game. Neville Hobson antagonized a large proportion of the audience with a dismissive attitude to Open Source, and a claim that businesses were not interested or affected by Open Source. Those of us considering the impact Firefox had on Microsoft's design and build decisions around Internet Explorer might beg to differ.

Another question wondered what the impact of economic turmoil might be on this otherwise rosy picture of continued innovation. Richard Titus felt that some of the best ideas had come about during the last dotcom crash because of resource constraints, and there was a general feeling that 'necessity would be the mother of invention'. 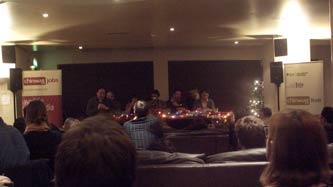 There was, though, one even more crucial economic issue that didn't get mentioned. With the huge numbers of pubs being forced to close in the UK, would The Slug & Lettuce still be around to host Christmas Chinwag Live in 2013?

I have to step in and slightly correct the characterization of my and the panel's comments on open source software.

Firstly, anyone who knows me and the companies I've founded/run knows I'm a huge proponent of open source software. While in the past there was a time where open source made CTO's and CEO's cringe or at least nervously consult their legal department, who nervously consulted their legal associations library, who posted questions on legal BBS's (strangely long lived online communities, btw). Those days, however, are mostly LONG in the past.

Open source software & solutions are smart and failing to use any technology due to it's open source, or non open source status, would be absolutely foolish for any modern technology based company.

My point on the panel, and I still support it, was that the fact that it's open source, or not open source is neither a pro-nor negative in its adoption. Neither businesses nor consumers care. Companies evaluate products and services on a cost/benefit equation. period. As it should be.

BTW there's a long and quite good argument to be made that open source SHOULD be something sought after or demanded by consumers, but that, my friends, is a different blog.