When moving countries, like I've just done, one of the most worrying things is packing up all your 'precious things', plonking them in the back of a van, and hoping that after a couple of ferries and a few thousand miles they end up intact at the other side. Amongst the things I moved, one I was anxious about was my Holdcourt Ltd TARDIS telephone box. 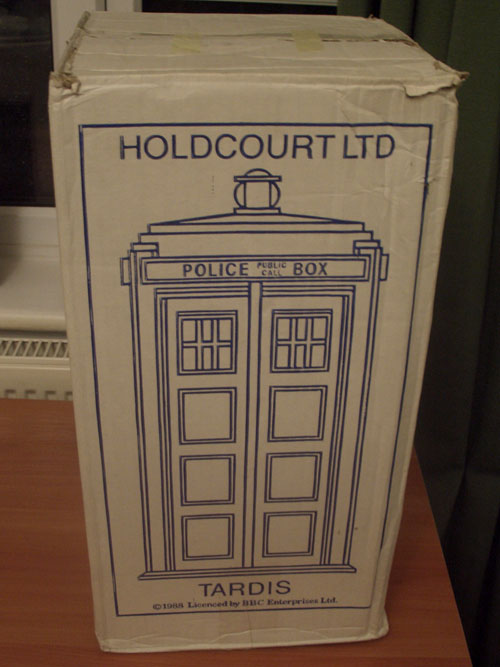 I bought it second-hand in St. Ives in the late 1990s, but according to the copyright symbol on the box, it dates from 1988. 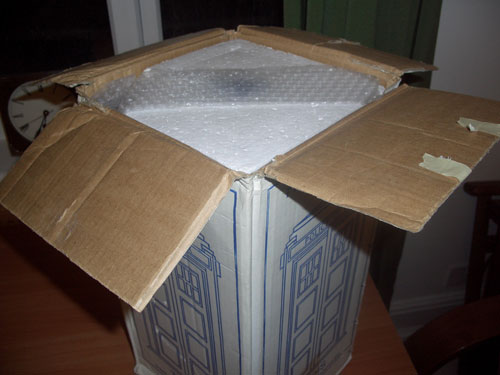 To put that in the context of Doctor Who history, 1988 means that Sylvester McCoy was on screen fighting Daleks, Cybermen, clowns and The Happiness Patrol, whilst a certain David John McDonald was, like me, just 17. 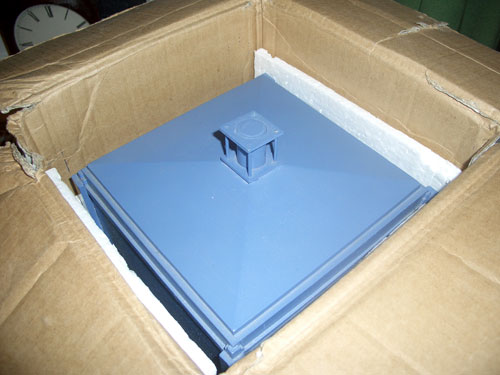 I've managed to retain nearly all of the original packing to the phone box, including an old price sticker, which puts the cost at £88.50. 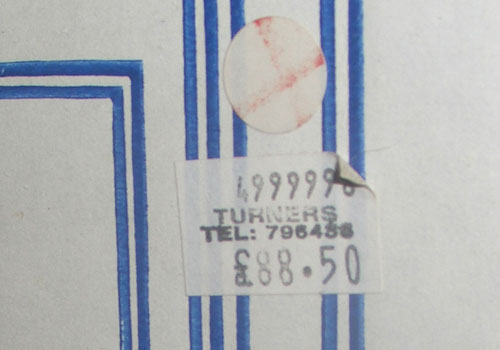 By the time I got hold of this bit of merchandise, the Doctor had only featured in two on-screen adventures in the previous decade - Dimensions in Time and the Paul McGann TV movie. With the show having such a low profile, I distinctly remember asking the guy in the shop "How much is that police box in the window?", and him rather indignantly replying "That isn't any old police box, that's the TARDIS".

As well as the outer box, I've still got the polystyrene inserts that cushioned the model - now embossed with an indented impression of the features of the time-travelling machine. 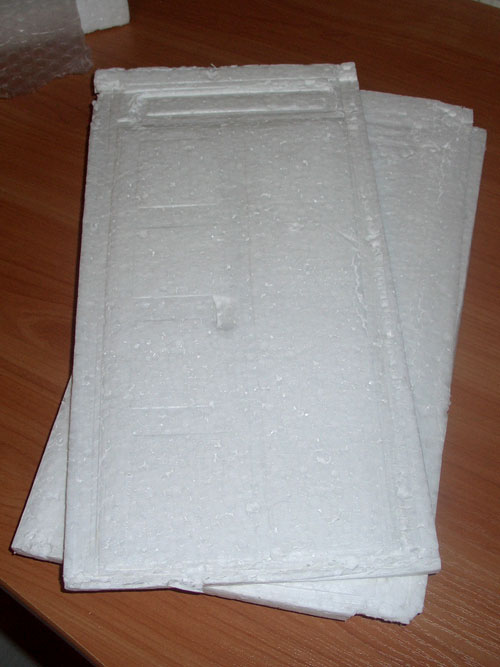 The sign on the TARDIS door has changed slightly over the years, no doubt due to fluctuations with the Chameleon Circuit, but someone was a bit over-zealous with the decals on my model. 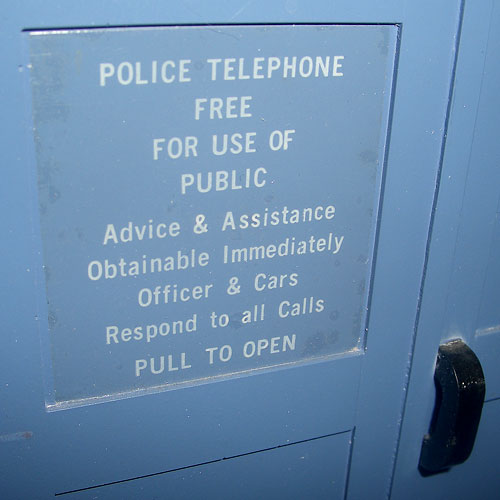 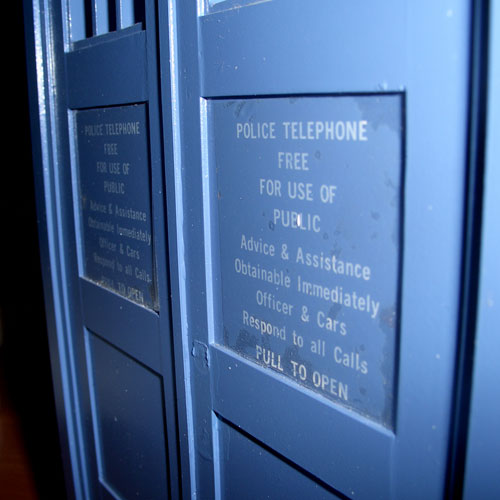 The model is 40cm x 20cm x 20cm, and the door opens to reveal a panel where you can hang a real telephone. 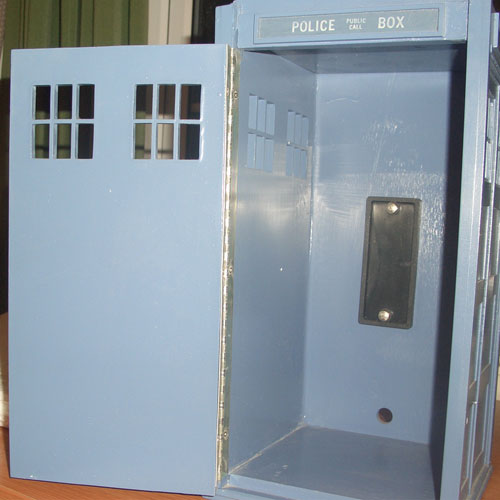 I believe it originally came with a telephone supplied, but from other pictures I've seen of it, the one I bought didn't have the original phone in it anymore, and doesn't in fact come equipped with one at all now. After all, in the 2000s, when everything is cordless and wireless, why would you keep your phone in a box? 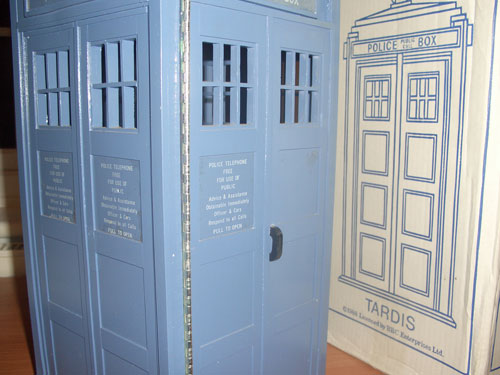 I've not been able to find out anything about the manufacturers Holdcourt at all, and of course, back in 1988 the design of the TARDIS was licenced by BBC Enterprises, the forerunner of today's BBC Worldwide. 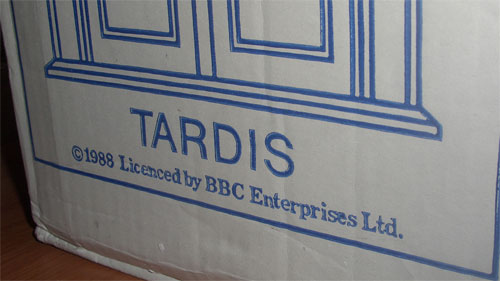 I'm very happy to say that apart from a little bit of extra wear and tear on the outer box, it survived the move, and is now happily sitting on the end of my desk :-) 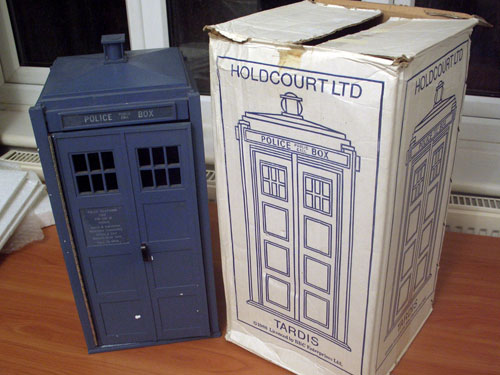 Lovely TARDIS, but a bit small, compared to our sheddies version.