"Desirable Future?" at the Dana Centre

I mentioned last week that I was at an event at the Dana Centre to mark the launch of Jack Challoner's book "Desirable Future?: Consumer Electronics in Tomorrow's World". 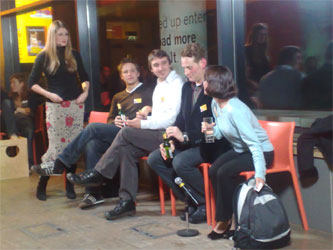 Despite having a couple of friends who have worked at the Science Museum, I've never been to one of the Dana Centre events before, and I was impressed. The format was a five minute presentation from each of the panel, and then the audience broke into groups. I was rather hoping it would be a chance to grope and fondle some exciting new gadgets, but actually it was a chance to form discussion circles, and the members of the panel rotated around each. There was then a final unified Q&A session.

Author Jack Challoner got to kick the evening off in order to plug the book, and also explain why he'd written it. He claimed to feel 'guilt' when he replaced a perfectly good Nokia N95 with an iPhone, but that he bought new tech gadgets because they "fulfill a desire". His research had been intended to find out how close we were to the world that sci-fi promised, where instead of carrying around clunky gadgets, we had 3D images beamed directly into our eyes. One thing he didn't explain was how he had apparently also once come to write a "jazz-funk opera based on the solar system".

He was followed by Dr Angela Druckman, who had a very different message about technology. She was concerned about the environmental impact of gadgets, and began to produce a depressing series of statistics and future nightmare scenarios:

I always think those discussing climate change have to tread a fine line between explaining plausible risks and behaviour changes, and just making everything sound so bleak that the entire audience just thinks "Well, what's the point?". I felt that Dr Druckman ended up on the side of making people just shrug with powerlessness, although her talk did really set the agenda for many of the discussions that followed.

Tom Dunmore of Stuff's presentation included what he claimed was an 'actual picture of the inside of the Internet' and the hint that the explosion in the gadget market had coincided with the launch of his magazine. More seriously, he made the case the technology had become about fashion rather than utility.

Since he'd followed Dr Druckman, he signed off with: "That's my upbeat assessment of the future of gadgets, but in the meantime we're all gonna die"

Last to speak was Dr James Intriligator. He was interested in the Psychology of gadget consumerism, and also explained how when gadgets have a slightly sub-optimal interface, we develop a secret loathing for them. I think the same is very true of websites.

In the group discussion sessions there was some good debate. Whilst Jack Challoner seemed sure that the cycle of upgrades and new purchases would continue, I did ask whether their might not be a forced market readjustment of the amount of disposable income people had for gadgets, and, indeed, for books about gadgets.

One person in my group was particularly scathing of the claims of the damage done by electronic gadgets to the environment. He wasn't convinced that his word processor and PDA were getting enough credit for the amount of paper and metal typewriters they were saving.

It was a good session, and I'm sure I shall be finding my way to some of the future Dana Centre events as well.

Read other recent posts about: Events, Other

I believe there's a direct link between how anthropomorphic an interface is and how much of that "secret loathing" we develop. My now-quite-passionate hatred of Macs can be traced to the two apologetic words "unexpectedly quit" when Word used to crash instead of just giving me the "error XX%6b has done something you don't understand" type comment from Windows.

Cue shouts of: 'It's happening three times a day, it's not "unexpected" to me, why did it take you by surprise?!" :-D

Glad you liked the event.

What do you think of the Dana Centre website (that I built)?

There's a few hidden features, including an iCal feed (http://www.danacentre.org.uk/events/ical), and XML representations of every page available if you add ?xslt=none to any URL...