Last week I went to the eCommerce Expo held at Olympia in Kensington.

Yesterday I wrote about a couple of the free 'seminar' sessions that I attended there. One of the main reasons for attending was to see the session being run by Chinwag - "Chinwag Live - Social Media ROI". With my recent series on measuring social media success for newspapers and television channels, it is obviously a topic I am very interested in.

Chairman of the session Philip Buxton blogged about the event on the Chinwag site last week - here's how it all looked to me as I squeezed into the space underneath a giant loudspeaker in the corner of a tiny room. 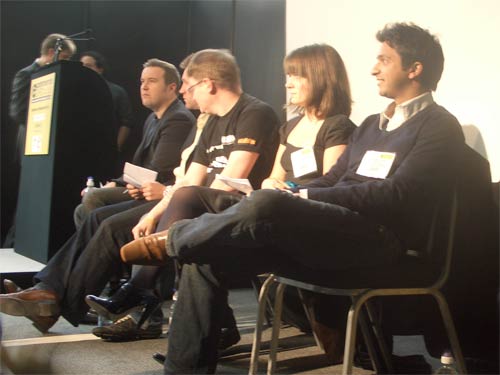 The first question for the panel of five revolved around this TechCrunch article indicating that measuring the level of social media chatter was not a good indicator of traditional success - the most talked about American TV shows on the web are not the most watched.

The panel were almost universal in pointing out that social media activity is still very much a niche, and that the top 10 watched American shows are very mainstream, so it isn't a surprise to see that smaller cult and sci-fi based shows generate a disproportionate amount of Internet conversations.

Alex Burmaster from Neilsen also pointed out some contrasting findings. Some work they had done a few years back on researching the advance buzz about shows predicted that out of a season's slate of new shows, it would be Lost and Desperate Housewives which would have massively successful debut success.

Wolfstar's Stuart Bruce stressed that it was important to set a correct level of expectation around social media campaigns. He cited a client who had got very excited about the possibilities of social media evangelism around their new TV show, without taking into account that their non-particpatory target audience of 2-5 years olds were likely to be considerably more enthusiastic about the show than their parents.

The session really got going with a very perceptive question from the audience. The person ran a small bike shop, and had dabbled with Twitter and blogs. They wanted to know whether they should simply be using social media as a pure marketing channel - 'we have special offer x on right now' - or whether they should be using it as a chatty channel.

The panel were somewhat divided here - although they all agreed that the right answer was going to be different for every business. Ankur Shah cut to the chase by pointing out that nobody has the business goal of 'getting the most followers on Twitter'.

Personally, if I was running a small shop now, like back when I ran record shops, I'd want a blog that covered a bit of wider music industry news, a bit of corporate news, a bit of news about the local gigs and music scene, and some discount coupons and web only special offers. I'd also want a Twitter feed that suddenly blurted out things like "We've just bought in a great Northern Soul singles collection". However, that all takes an investment of time and money, which, in the present doom-laden economic climate, a lot of SMEs may struggle to find.

The second audience question was about what safeguards there were in place to protect a brand from someone 'simply tearing a company apart online'. The basic answer from the panel was 'none'. As Stuart put it:

"If you are a s&!t company with s&!t service people will say s&!t things about you."

Helen Lawrence from Dare made a very valuable point though about the search engine value of addressing public criticism. She said that if you reply to the original forum post or blog message with an apology and a solution, then if people are Googling for a similar complaint, they'll get a much more positive brand experience.

Another question from the audience was about how you generate or measure an ROI from Twitter. Ankur Shah for Techligtenment was a fantastic contributor to the panel, with a very hard-nosed approach to turning social media into sales. As he put it, if Twitter themselves haven't worked out how to make money form the service, then how the hell is anybody else expecting to make an ROI off the back of 140 characters?

Robin Grant from We Are Social stated that there are some interesting ways to use Twitter. Firstly, it can be a hyper-targeted marketing channel. He also thought it was worth considering - though hard to measure - that since Twitter wasn't a mainstream activity, people on Twitter tended to be social 'influencers' who were likely to be active elsewhere on the web, and so worth reaching.

Stuart also suggested using Twitter as part of 'the mix'. The appeal of Twitter was that it enabled you to assess in real-time how people were talking about your brand, or what were the hot topics of discussion. This could be used to inform responses in other channels, not just as the spur to send out a tweet.

The final question to the panel was a challenge to 'define' social media, and explain how businesses should be building towards the emergence of a generation who make all their purchasing decisions based on their online peers rather than on traditional media.

Ankur strongly disagreed with the premise of the question - suggesting that social media was just exactly what people have always been doing - chatting with peers - in a new space.

I find that I tend to agree with him. When I was a teenager, the choice of records I bought was shaped by what was on the radio, what was in the NME, and what my friends would think of me when I brought a particular album. These days, the influence of the first two may have diminished, but the final fact hasn't changed. Except in one vital respect - now businesses can listen in on MySpace / LiveJournal / Twitter etc to what my peer group thinks about my purchases.

The nub of the issue for the panel was that it was hard to put real numbers onto social media 'engagement' - or even sometimes to clarify what 'engagement' meant for a brand. Ankur thought businesses could get some idea of this by using the tried and tested methods of affiliate IDs in links and the referring URL. Alex argued that big brands could use panels and standard statistical methodology to get a handle on the figures, but that this would be beyond the means of most of the small businesses represented in the room. Either way though, with the news full of stories of an economic downtown, the years of businesses tolerating 'fluffy' metrics for social media are likely to be over.

Excellent write up, and the first of our events I've not been to. I missed a good one dammit! Glad my idea (when we planned this back in July) to focus on ROI tuned out to be so timely.

Reading this, I'm thinking social media is so broad (and a lot of people hate the term too); maybe we need to start to go granular next time...

Hi Martin, the podcast is up now in our regular RSS and iTunes flavours...