Over the last three days I've been blogging my take-away facts and quotes from the 2008 EuroIA Summit in Amsterdam. On Saturday morning I was giving my own talk on how to take the 'Ooh' out of Google and get site search right for news. 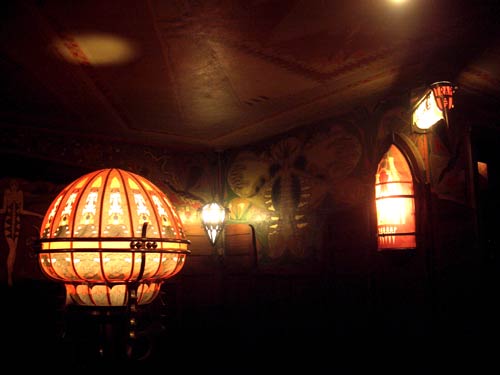 Here is my final installment of commentary on the conference.

"Now you understand why the animated chart is so helpful, you wouldn't want to do this before your first cup of coffee in the morning."

I mentioned in yesterday's post that I missed Peter van Dijck's talk about taking social networks global. Instead, I went to the talk by Scott Weiss. Having spent six months in Austria with Sony trying to document complex mobile phone UIs, I was intrigued to see what Scott had to suggest.

The answer, sadly, seemed to be to make documentation even more complex. 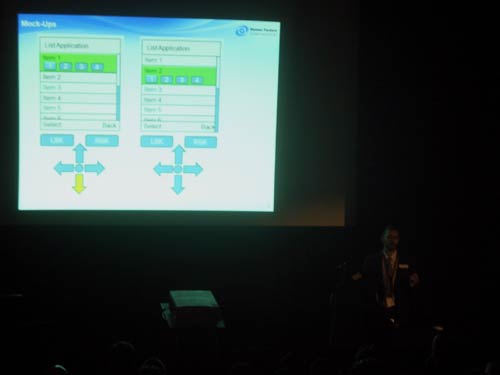 I thought his use of Flash to demo the expected interactions was a great idea, but I tended to side with the members of the audience who suggested that producing this volume of documentation was one way of making sure that the developers and software engineers never read it.

One audience contribution in favour of intensive documentation pointed out that it forms a 'contract' between the design and development teams, and that you'd have to do the work anyway in order to document the use cases for QA testing, so you might as well do it up front. Scott agreed, and suggested the documentation could be "both a tickle and a hammer" which was a lovely phrase.

My other favourite quote from Scott was:

"So, all my theories are being blown out of the water, but hey, it's OK to be wrong."

Bogo Vatovec was held up as evidence that the Euro IA Summit was breaking down borders in Europe and gradually, like the Eurovision Song Contest, heading eastwards. Bogo is from Slovenia, and gave an excellent and amusing talk about personalisation and how to document it. He never missed a chance to be self-depreciative and suggest that the audience should be watching John Ferrara's session on game user interfaces instead. 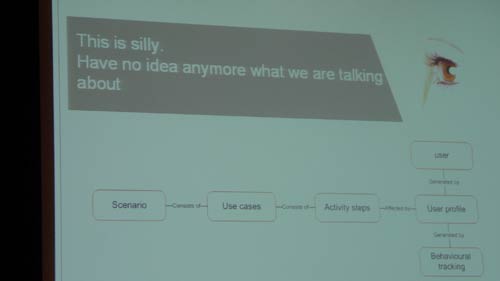 He had some very complex ideas to get across, but did so with great clarity. I also liked the fact that he purposefully had produced too many slides, so that anyone downloading them after the conference would have 'the full stack', regardless of how much ground he had covered. 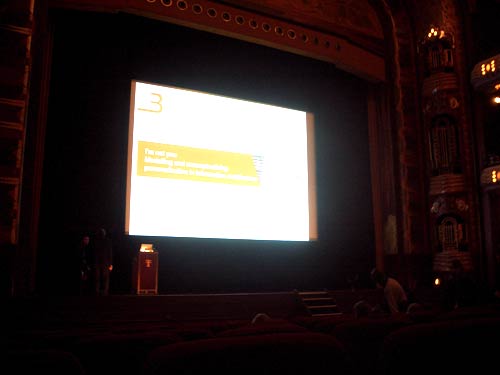 Bogo's key points included that personalisation features should be an 'extension' of a system, not the default behaviour - things should still work even if there is a reason that you can't identify the individual users. He also touched upon the problems of suddenly buying one off-kilter item and throwing off all your Amazon recommendations - or the "My TiVo thinks I'm gay" problem, as I've always known it.

My favourite quotes from Bogo included:

"Contrary to popular belief, Amazon did not invent personalisation"

"Extending the gaming experience to conventional UIs" by John Ferrara

Those of you familiar with the timetable of the conference may have spotted that yesterday I promised to review two sessions that clashed - Bogo Vatovec and John Ferrara. This wasn't because I was in possession of some sort of Hermione Granger style Time-Turner device - it was just that John Ferrara was re-presenting his excellent talk from this year's IA Summit in Miami, so I know roughly what was in it.

Back in April, I said the following about it:

"A few pull-quotes can't do justice to how much good information there was in this talk, and it is one I'd recommend you have a listen to the podcast version of, even if the bit where a complete novice was playing an EyeToy game in front of 200 people doesn't make much sense on audio."

Victor Lombardi was the final formal presentation of the conference, with a session on putting together 'concepts'. Although I found the session interesting, I couldn't help feeling that for much of the audience, their involvement in projects began at a much later stage than the definition and exploration of the 'concept', and so I wasn't sure how useful it would be for the average corporate intranet IA.

One strong theme that came out of it for me personally though was that, unlike industrial designers, when we make web applications and sites we tend to rush to wireframes and 'colouring in' before we have explored multiple potential solutions. Victor's championing of questioning the brief looked like a good way to try and break out of that vice.

One thing in particular made me laugh in Victor's presentation. He was talking about the tool of 'translating' someone else's product concept into a new environment. His example was a project that had developed an 'Ask mom' site for the American market, inspired by a German site.

As he was talking about how listening to Peter van Dijck had reminded him of the need to do these translations very carefully, the screenshot behind him showed that an American designer on the 'Ask mom' site had reckoned that the easiest way to illustrate swearing was to just type a load of gibberish in the Greek alphabet. I mean, who would recognise those crazy and amusing symbols? 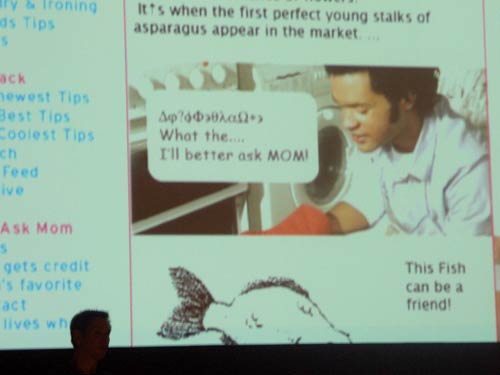 Mind you, perhaps they know their target audience well - I once overheard a native of North America on a Greek ferry looking at the signs and exclaiming:

"Gee, how does that even make a word? There's, like, symbols in it!"

It is tradition for IA Summits to end with a 5 minute madness open mic session. This year the highlights were: 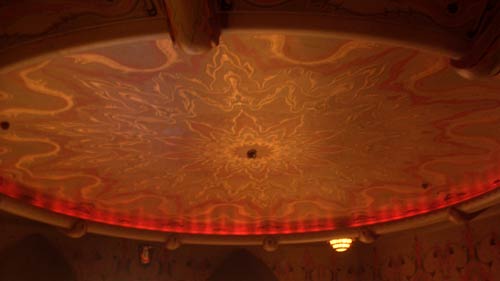 Next year's conference will be in Copenhagen in Denmark. During the 5 minute madness we were welcomed to the city with the following mantra:

"You may have heard about Copenhagen that it is expensive. That the beer is bad. And that we hate all foreigners. I am here to tell you that all of this is true." 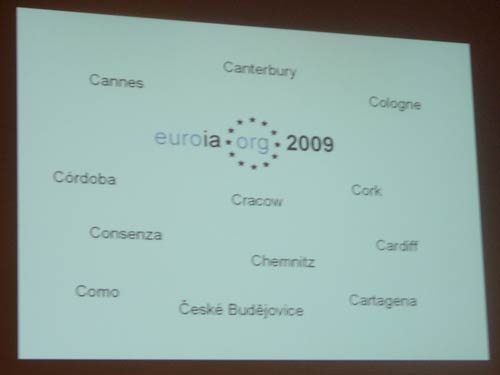 Martin, thanks for the report; it nicely complements my notes (not entirely sure they will make their way into a posting).
And may I add that your presentation was definitely in the top-3 for me? Great build-up and examples, and I am looking forward to the extended version!