With all eyes on the political situation surrounding the 2008 Beijing Olympics in China, I've been writing a series of posts looking at the history of politics, protest and dissent at the Olympic Games. In the last post I was looking at what was the low-point of the Olympic movement to date - the hijacking of the games by the Nazis for propaganda purposes in Berlin in 1936. 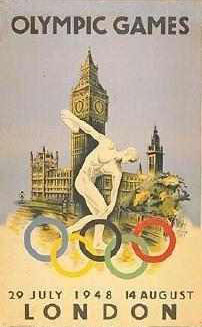 After World War II the Games resumed with a hastily arranged and spartan celebration in London. It seems that not only to the victors go the spoils of war, but also the chance to pick'n'choose who gets invited to the Olympics. Just as in Antwerp in 1920, it was a case of 'recent aggressors need not apply' - Germany and Japan were not welcome. Aside from the politicking over the invite list, the Games passed relatively free of controversial incident. 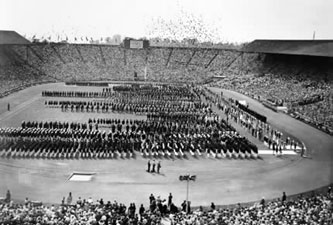 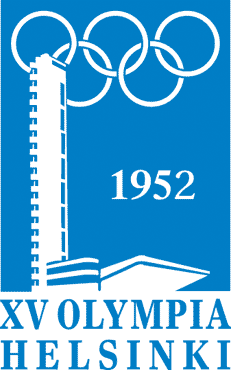 Helsinki had been mooted as a candidate city during the war years, and finally got its chance in 1952. Again, most of the politics and controversy revolved around who attended the games. There were debuts for the Soviet Union, which had stayed away from all Olympic competition since its foundation during the First World War. There was also a first appearance for the state of Israel.

Germany and Japan were also re-admitted, although Germany was now a fractured state. Nobody attended from the Soviet sphere of influence in the East of the country, but two teams represented "West Germany". As well as a team from the Federal Republic of Germany, there was the only Olympic appearance of a team representing the Saar Protectorate.

This disputed territory between France and Germany was an independent protectorate during the early 50s, and did not join "West Germany" until later in the decade. The Nationales Olympisches Komitee des Saarlandes sent a handful of athletes to Helsinki, but they returned with no medals.

Melbourne had been a unpopular choice of venue, as the location in the Southern Hemisphere disrupted the usual athletics calendar, and strict quarantine regulations meant that the equestrian sports had to take place in Sweden some months earlier. In the end it was the Olympic torch relay that caused the biggest fuss, with a student prank ending up gaining global attention.

Barry Larkin and a group of friends were annoyed at the pomposity which was accompanying the torch relay through Australia:

"A few of my friends and I thought too much was being made of this Olympic torch business. It was being treated as a god, whereas in fact it was originally invented by the Nazis for the Berlin Games in 1936. So we got a chair leg, some silver paint and an old plum-pudding can, and we made our own torch."

Complete with burning underpants to supply the flame and dressed as a runner, the students began their mock parade down the official route. At some point, someone failed to recognise the joke, and began accompanying the torch as if it was the real thing. Larkin ended up being escorted to meet the Mayor of Sydney, Pat Hills, who thought the real torch had arrived earlier than expected, and so broke into his welcoming speech. Larkin slipped away and become something of a cult hero - even if, as he puts it, "50 years down the track" he seems a little tired of talking about it. 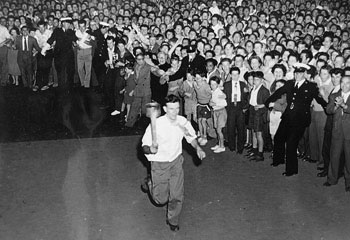 Both of these cities had been waiting a long time to host the games. Rome had originally been chosen to host the Games in 1908, but a devastating eruption of Vesuvius caused them to be moved to London. Tokyo had been due to the host in 1940, but the outbreak of World War II made that impossible.

For two Olympiads, the Games took place with no real controversy. There was, though, a political gesture in Tokyo, where the Olympic flame was lit by Yoshinori Sakai, who had been born near to Hiroshima on the day that the first atomic bomb was dropped on the city. In fact, it was events outside Tokyo that made the headlines however, as during the course of the 1964 Olympics Kruschev was deposed in the USSR, and China made their first successful nuclear bomb test.

For the best part of the next two decades the Olympic Games would find themselves plunged into controversy, with boycotts, race politics, demonstrations and a deadly terrorist attack tarnishing the image of what was intended to be a sporting celebration. In the next part of this series I'll be looking at the controversies of the 1968 Mexico Olympics.

Here's another one for you:

Today in Beijing, US swimming gold medallist Amanda Beard unveiled a naked ad she has done for PETA (People for the Ethical Treatment of Animals), entitled ‘Be Comfortable In Your Own Skin: Don’t Wear Fur’.

Given that Beijing is hosting the Summer Olympic Games this year, Beard thought now was a great time to remind people about the horrific conditions that have been documented on Chinese fur farms.

See the ad, the Beijing unveiling and read more at PETA Europe’s blog