I started looking the other day at the BBC Trust's review of the bbc.co.uk site. I'm intrigued by the fact that on the one hand the Trust do not think the BBC should play a role in web search, yet on the other hand they think that the site should drive more traffic to external sites. I wanted to look a little bit today at the issue of external links.

The BBC Trust are unhappy with the amount of click-through traffic that the BBC sends downstream:

Well, for a start, the BBC Trust adopts the myopic British view of a British regulator about the Internet. In a global media ecosystem, only click-throughs from UK users count - but that is an argument for another day. What is interesting here is that the figure of 4.6 million British click-throughs is 'disappointing'. That is an emotive term, which implies that there is a corresponding level of click-throughs that would be 'acceptable' and a higher level that would leave the Trust 'ecstatic'. So what are those numbers?

As I was saying on Friday with using the ratio of Google referrals to internal search referrals as a measure of 'usefulness', this is an odd metric to use. The Trust don't appear to have benchmarked, for example, how many click-throughs content portals like Yahoo! or MSN send downstream. Nor have they measured how much traffic other British media sites send on. There doesn't appear to be any context to saying that this figure is 'disappointing'.

Indeed, they are concerned that the the Graf review criticised the BBC for not sending enough traffic to external sites, but it was only because of the Graf review that the BBC started putting click-through tracking on all external links in the first place. The Trust have no measurement of what the figure was in 2003 or 2004, so they have no idea whether it has gone up or down, either in absolute terms, or as a percentage of the total number of BBC page impressions. Furthermore, Graf felt the BBC should keep web search in order to help send traffic downstream, whereas the Trust want more traffic flow out, but seem to want to take away one of the mechanisms for doing so.

The desire to see more people head from bbc.co.uk elsewhere also contradicts the findings of some of their research, which sees users valuing the BBC's content for what it is best at - being a destination, not a a starting part for exploring the web.

"I go into it through a narrow channel that I know what I need and I go straight to it." Female, aged 19-30, Glasgow.

"I don’t really go for a wander around the site, I just really log on, find the information that I need and get off." Female, aged 19-30, Belfast.

There is plenty of anecdotal evidence that not all users want the BBC to link to external sites anyway. When the Newstracker feature was first launched on the BBC News site, a good proportion of the initial feedback from users was asking why the BBC was taking advertising from other news sites, or complaining that it was 'akin to newsreaders suggesting viewers change channels'.

With their lukewarm reception to the concept of the BBC providing external links when people search, it seems that the Trust want bbc.co.uk to focus on providing more context sensitive links alongside content. They seem unconcerned by the editorial and maintenance overhead that this will inevitably cause, nor aware that this is a route that the BBC has already been down.

In the late 90s and early 2000s, the BBC's mission as a 'trusted guide to the web' was interpreted as having a quality directory of websites in the shape of Webguide. There was a maintenance nightmare, with not just automated link checkers required to ensure that sites hadn't disappeared, but constant manual checks required on everything listed to make sure that domain names hadn't transmogrified from being a gallery of cute kittens into pr0n or gambling overnight. This meant that editorial staff or journalists could link to a section of Webguide, rather than an individual site, safe in the knowledge that the links would work.

Part of the reason of the BBC switching the emphasis to web search was because this was untenable on the editorial resources available. That isn't just a lesson that the BBC learnt - Yahoo!, LookSmart and the DMOZ Open Directory Project are all testament to how hard it is to keep a manually edited directory of the web accurate, interesting, safe and up-to-date.

If the BBC Trust dreams of context-sensitive deep links next of every piece of BBC content, then I suspect their next service review will be fielding a lot of complaints from users about broken links and inappropriate content. A recent study of the linking pattern on 'found object' blog Boing Boing put the half-life of the Web at two years.

"Digital memory loss on the Web can mean a number of things to the blogger and blogging community, for example, link-rot, where over time, pages are deleted or moved or changed, resulting in the original URI pointing to something else, or nothing at all. This is a big problem: the half-life of the Web is around 2 years, which means that every two years, our collective intelligence and expression of our cultural, scientific, artistic and technical selves, is diminished by a half. An excellent example of link-rot can be seen in this archive of Boing Boing's first 5 years, in which 25% of almost 47k outlinks no longer point to anything. We suspect also that a good proportion of the outlinks that do point to something don't necessarily point to the original location. " 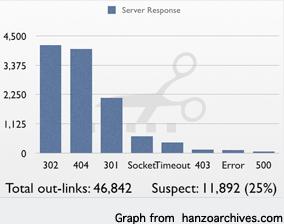 That is a lot of hand-picked broken links, which the BBC risks emulating by following the BBC Trust's aims. Richard Titus left a comment on my previous post about the BBC Trust review, saying that he couldn't personally see a role for pure web search. I tend to agree with him. The days when the BBC could slap a web search box into the middle of an existing homepage design, stick a couple of ads on BBC One, and hope to compete with Google are long gone.

However, if you look at it not just as 'search', but as a way to do automated contextual navigation for topics and subjects that the BBC doesn't itself cover in depth, then there may still be a place for that web index after all.

One final thing really caught my eye in the BBC Trust report, and later this week I want to address the issue of embedding 'atomised' BBC content in other people's websites.

Newstracker was introduced in the wake of Graf and is now unused. But they are looking at giving it a new push

I like how they don't link to your posts when quoting you!

Mike, I've easily had more than my fair share of links from Alan and Nick over the last few months, so I think I can forgive them - quite funny given the subject matter though ;-)

Mein Gott - I've only just noticed that it was a double omission in two successive roundups. To fail to link to one currybetdotnet post might be considered cack-handed; to fail to link to two begins to look like it's something personal...

Sites with huge contents is common to have broken links. I never thought the amount of external links can be a big issue as more people are concentrating on getting inbound clicks.