I've been lucky enough that whilst I've been in London for a month working, there have been a couple of interesting events that I have been able to go to. Last week it was Chinwag Live, and this week it was the launch of Adrian Monck's book "Can you trust the media?".

It is some testament to the openness of media professionals in the UK that you could just walk into a college and go to a debate featuring big personalities like Andrew Gilligan, Yasmin Alibhai-Brown and Evan Davis, with Martin Bell lurking in the audience.

The thrust of Professor Monck's book is that 'trust' was first used as a metric to measure the power of newspapers in the 1950s and 1960s in an effort to persuade advertisers that they should still invest in print advertising, rather than desert to the new-fangled television medium. Monck is concerned that 'trust' has become a mantra for mainstream media organisations, but that it is a flawed metric that doesn't really address the challenges posed to traditional broadcasters and publishers as new technology grows.

He cited the fact that Google News is one of the most trusted sources of news in the U.S., despite simply being an algorithm - in fact he invited any other algorithms in the room to step forward. He argues that the idea that media organisations need to 'rebuild a sacred covenant' with the audience is meaningless, since it had never in reality existed. Trust was 'a balloon we ought to burst'.

Charlie Beckett broadly supported Adrian's argument, stressing that trust is 'a word we are all in favour of, but no one knows what it means'. He felt that the future lay in 'network journalism', where the public were involved in many more stages of news gathering and production than at present. Charlie also delivered probably the cruelest barb of the night - asking if 'factual accuracy' was the fundamental principle of journalism, how does the Daily Express exist?

Andrew Gilligan's appearance was almost inevitably overshadowed by two things - the fact that he inadvertently got my ex-boss at the BBC fired, and the campaign, bolstered by Gilligan's journalism, that the Evening Standard ran against Ken Livingstone in the run-up to yesterday's London Mayoral election.

In fact there seemed to be an anti-Gilligan element in the audience around where I was sitting, that hissed him every time he mentioned Ken. Later on in the session, Gilligan went on to explain the Evening Standard position as being based on working with Ken Livingstone day-in, day-out, and having to deal with:

" his lies, his exaggeration, his unpleasantness "

But then again, the Evening Standard cannot make a claim for any kind of considered neutrality either over the last couple of years.

Andrew was there to disagree with the premise of the book. He felt that during the Hutton affair, the public had trusted him and the BBC, and not the government, and that was precisely the reason that cabbies refused to take his fare even though their paper of choice, The Sun, was vilifying him.

Andrew Gilligan was particularly concerned that the idea that people could construct their own news out of the 'clouds of news' was "b0||0^%$". His argument was that nobody would have found out about the 45mins and WMD issues, or the secret sexy City Hall emails if it wasn't for the work of a trusted (and award-winning - as he pointed out a couple of times) journalist.

Yasmin was late to the panel, although sadly her excuse was that she had gone to the wrong building, rather than a la Diaz that 'Mercury was in retrograde', which would have been much more amusingly acceptable from someone who was going to go on and argue about the importance of professionalism.

Although she disagreed with Adrian, she said that she was pleased that the book had been written. She was immensely proud of the way that the press had stood up to Government pressure in the run-up to the war in Iraq, and felt that both trust and a healthy skepticism were necessary for a functioning society. She cited Soviet Russia as a place where people had a skepticism for official sources, which liberal democracy tended to wash away.

She did complain about the 'anonymity' of the Internet, and as has been documented before, she has a very 'old media' mindset about the Internet. She proclaimed herself on Wednesday night to be a 'self-taught' journalist. For someone who mostly makes her living writing opinion pieces, she skates on thin ice when she basically dismisses anyone else who writes self-taught opinion on the basis that they do it outside the old mainstream media 'gatekeepers of opinion'.

When it was time for questions, one of the first appeared to literally judge a book by its cover. Adrian Monck's response was that having an analysis of a book based on the fly-jacket was 'always useful', and 'if you go on to read the book, which I strongly urge you to do' you might come to different conclusion about what I'm saying.

Martin Bell was invoked from the floor to give his view, and he strongly sided with the opinion that people can trust the media, and do trust the media. He went back to cite Andrew Gilligan over the WMD affair, stating that Andrew was right and the Government was wrong, and that the public believed Andrew and the BBC because they understood that.

There certainly seemed to be an element in the audience though who felt that even asking the question 'Can you trust the media?' implied the answer was no, and Adrian Monck was accused of 'under-mining the profession' at a time when it was vulnerable. That wasn't my understanding of Adrian's argument.

Evan Davis summed it up by suggesting that if a room full of estate agents were discussing 'Can you trust estate agents', then the answer would almost certainly be that it was right for the public to make their decisions on a case-by-case basis using research and their skills of discrimination. The conclusion would be that there were a wide range of estate agents, with varying degrees of trustworthiness. Ask the same question of journalism however, and you got what he described as a 'virulent' debate. 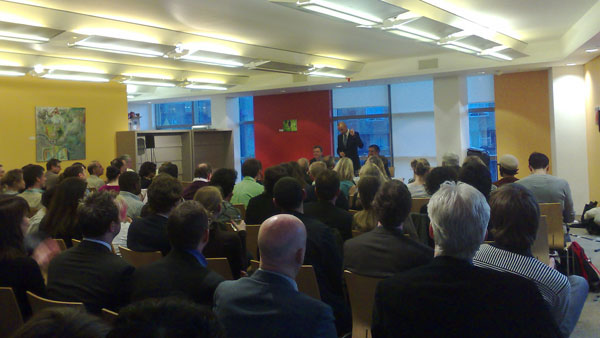 Virulent or not, it was an excellent session. I've got some further thoughts about the evening, particularly about the way the debate touched on new media, which I intend to come back to next week.