There was an astonishing message in the official BBC Doctor Who News RSS feed yesterday:

Now that we've switched over to our shiny new site, our news stories are being created in a different way. Therefore you'll no longer see news stories added to this page.

Instead, you'll find them if you follow the link below.

More importantly, if you subscribe to our RSS news feed using the link:

you'll need to update it to: 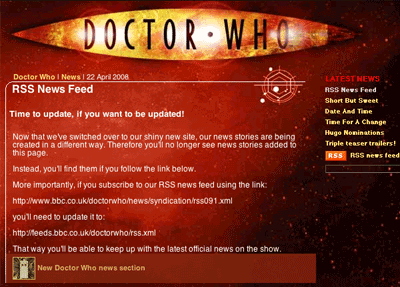 As far as I can tell, between Bloglines and Google Reader alone, the Doctor Who feed has over 1,500 subscribers. All of whom the BBC is making edit their subscription, rather than the BBC editing one line in a httpd.conf or .htaccess file or writing their own RSS re-write solution or however they choose to re-direct.

Plus, since the BBC only publishes partial feed content, the message announcing this change wasn't even explicit for RSS users. Subscribers were told:

Time to update, if you want to be updated.

Moan, moan, moan eh? Still, it isn't all bad. I see the site now appears to have potentially stable URLs for each episode, and when viewed in advance they redirect to the most recently transmitted episode. Try http://www.bbc.co.uk/doctorwho/s4/episodes/S4_05 today, and you get sent to the S4_03 page for Planet Of The Ood. I'm impressed with that at least.

Read other recent posts about: BBC, Doctor Who, RSS

As feed publishing becomes more prevalent the best way to do this is to have feed based domain names, so http://feeds.bbc.co.uk/doctorwho/rss.xml
becomes http://doctorwho.feeds.bbc.co.uk which is almost shorter than the original! Then if the feed address changes the user doesn't need to know anything about it. By the way I like your CAPTCHA :-)

I'm sure there are plenty of reasons why they didn't want to re-direct from the old URL, but it just seems a really bad call. These are the most dedicated users of your service that you are messing about.